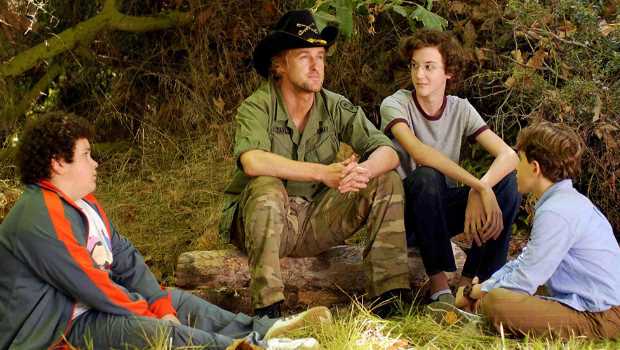 Summary: Drillbit Taylor's major failing is a lack of charm: it concentrates too hard on implausible moments caused by its mishandled set up.

Hyping one man up as the saviour of slacker comedy, or any film genre, normally results in a swift fall. If Drillbit Taylor is anything to go by, the golden touch of Judd Apatow could be leaving him. He’s only on production duties here, but his brand has been much-touted as paving the way of the future for a style not normally known for its intelligence. One part Superbad, one part You, Me and Dupree and one part Fight Club, Drillbit Taylor unsurprisingly struggles to achieve the same warm-hearted spirit his biggest hits The 40-Year-Old Virgin, Knocked Up and Superbad.

The set up revolves around three kids starting at the bottom of the popularity scale, just like Superbad. Chubby loudmouth Ryan (Gentile), the uncomfortably lanky Wade (Hartley) and impish Emmit (Dorfman) find themselves the target of ultimate psychotic bully Filkins (Frost) on their first day of high school. As his parents have moved to Japan, the 18-year-old can get away with anything so Filkins and his chums make the trio’s lives hell wherever they go – be it to their lockers, the toilets or even down the street. Unable to stand up for themselves, they decide to hire a bodyguard. Enter Drillbit Taylor (Wilson); a freeloading, homeless bum who promises to teach them the skills they need to beat up their enemy – for a much higher price than the kids think. Afraid of confrontation, he secretly steals from Wade’s house and keeps them off school to learn bogus fighting techniques, until his students run into Filkins who lands a sucker punch on Wade. Then it’s up to Drillbit to be prove his worth.

Apatow bought comic delights to cinema with his innocent-at-heart films poking fun at life’s tribulations. The starting of high school is as much a well-worn topic as Superbad’s end of high school search for sex and entering adulthood, but the writers, Knocked Up star Seth Rogen and Kristofor Brown, forget that keeping it simple is often the best approach to comedy. Putting a hired bodyguard into school life is hardly an school experience audiences can relate to and Drillbit Taylor suffers as a result. It’s the kind of high-concept idea cooked up by movie producers looking for a “hilarious twist” to jazz up a script they haven’t got enough confidence in. The sad thing is, Drillbit Taylor would have been better without Drillbit bumbling into the frame. His presence is an excuse for gaps in logic to appear, especially as he manages to land a role at the school as a supply teacher, then invites his bum friends in as well. His romance with a member of staff stretches things to the limit, while the bullying sequences are needlessly and unrelentingly brutal – a theme carried on into a Fight Club inspired ruck at its conclusion. Violence is the answer, it seems to be saying.

Wilson has always been most effective as the wacky character balanced out by another more level-headed lead, but here he is in You, Me and Dupree-style obnoxious mode. His last-gasp change of attitude comes too late and it is left to the younger members of the cast to try to pull the film through a tiring 102 minutes. Of the three, Gentile stands out with excellent delivery and timing, particularly when confronting Drillbit and beating Filkins in a rap-off. Hartley does his best to look awkward and is just about likeable as the shy weedy kid, however watching at Dorfman is still just as unsettling as seeing him in the American versions of The Ring so it’s a relief he is generally kept on the sidelines once introduced.

Drillbit Taylor’s major failing is a lack of charm: it concentrates too hard on implausible moments caused by its mishandled set up. There is incitement of violence towards minors together with references to happy slapping and the blogging of fights on the Internet which could easily be viewed as in poor taste. Apatow and Rogen may have struck comic gold twice last year, but they will need to impress with their next collaboration, Pineapple Express, or risk undoing all that good work.