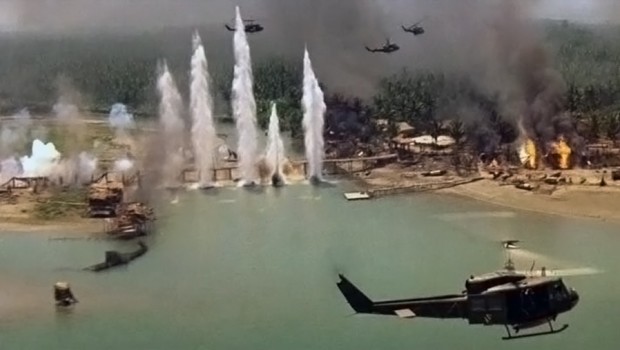 Summary: Apocalypse Now is a classic film that everyone should be made to watch.

Apocalypse Now, Francis Ford Coppola’s masterpiece, is the story of Colonel Benjamin Willard (Sheen), a special operations officer sent into the jungle during the Vietnam War to find and assassinate the rogue Colonel Walter Kurtz (Brando). Willard, a deeply troubled man, joins the crew of a Navy Patrol Boat, enlisting the help of the Air Cavalry to escort them to the Nung River. Their commander Kilgore (Duvall) initially refuses until he finds out that one of the crew is Lance Johnson (Bottoms), a pro surfer. Kilgore, a big fan of the sport, changes his mind, offers them an escort, and orders an attack on a beach which offers access to the Nung River as well as a perfect beach break. While helicopters drop napalm on the jungle, Kilgore and his men surf amid the mortar explosions.

As Willard travels further into the jungle, the tone darkens and the atmosphere becomes ever more oppressive. By the time Willard finds Kurtz, he is teetering on the brink of insanity himself…

Apocalypse Now is one of those films that has entered the culture (‘I love the smell of napalm in the morning’), so much so that I actually couldn’t remember if I had ever watched the whole film before. I think I have, but on some grainy old VHS, so one of the pleasures of watching it in this immaculately restored digital print is the clarity and beauty of the images; the story also made a lot more sense. Put simply, Apocalypse Now is a classic films that everyone should be made to watch. Leaving aside all the infamous production problems, including Sheen’s heart attack, this is an extraordinary film, more so in these days of CGI and visual effects, exploring the pointlessness of war and the peculiarities of the human psyche. A must-see, preferably in the cinema.