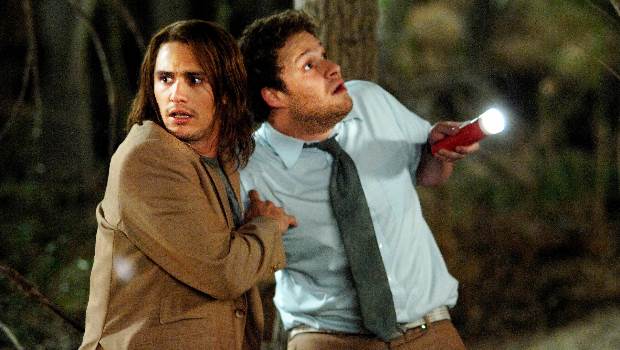 Summary: When Pineapple Express is running at this level of comic invention it’s a real joy; it’s just a shame that it doesn’t bring the same standard of ingenuity to its storytelling.

The Judd Apatow express continues apace with this odd mix of stoner comedy and action movie, the eighth film in two years to carry the Knocked Up director’s seal, in this instance as producer and co-story writer. But while the ‘sweary but sensitive’ approach that has hallmarked hits like Superbad and The 40 Year Old Virgin is present and correct, as are many of Apatow’s regular cast members, several elements make Pineapple Express notable as more than just ‘the next one’ from this popular and profitable production line.

Firstly, the director is David Gordon Green, a filmmaker up until now best known for character-based indie dramas George Washington, All The Real Girls and Undertow, films that will have gone unnoticed by a large proportion of mainstream moviegoers. While this choice wouldn’t seem like such a curveball if Pineapple Express were rooted in the emotional/relationship territory that Apatow movies have largely traversed so far, Green’s film also steps out into a recognisably different genre; the ‘on-the-run’ action movie. The results, as suggested above, are mixed, with enough consistent comedy to keep audiences laughing, but enough problems to leave more demanding viewers feeling somewhat let down.

Green brings little of his previous films’ style and mood to the story of Dale (Seth Rogen) and Saul (James Franco), a slacker stoner and his even more laid-back dealer who find themselves on the run from a gun-toting drug baron (Gary Cole) and his corrupt cop partner (Rosie Perez) when Dale inadvertently witnesses them murdering a rival. The director handles most of the film ably but unremarkably, just occasionally adding a particularly stylish touch, as in one lovely blissed-out forest walk sequence and again when employing a subtle but effective ‘woozy camera’ technique when the two characters have a particularly heated argument.

But this is a film where the writing dictates the tone more than the direction, and it’s here where the films biggest flaws are found. Star Rogen co-writes with his Superbad partner Evan Goldberg, and they never seem entirely sure what they are going for, lurching from hilarious but inconsequential conversations between the stoned pair to surprisingly violent action sections, oddly reminiscent in tone of ‘80s action comedies like Beverley Hills Cop (surely intentional, judging by the dramatic guitar cues on the soundtrack). Added to this are some very forced plot developments – most obviously when the script requires the two characters to separate – and a romance sub-plot which seems included solely to allow for a humorous ‘meet the parents’ scene before the girlfriend character is clunkily disposed of for the final third of the film.

Thankfully, the quality of the performances and the jokes go a long way towards making up for these structural and tonal problems. Franco, best known as the none-more-wooden Harry Osborn from the Spider-Man movies, is the film’s great strength, playing a character clearly based on Brad Pitt’s permanently dazed and confused Floyd from True Romance. He displays a great knack for comic timing and has breezily natural chemistry with Rogen, so it’s never less than enjoyable to watch the two of them bumbling their way around. The film is also dotted with laugh-out-loud set pieces, the best being a farcical car chase that sees Franco with his foot stuck halfway through the windscreen of the car he’s also trying to drive. When Pineapple Express is running at this level of comic invention it’s a real joy; it’s just a shame that it doesn’t bring the same standard of ingenuity to its storytelling.