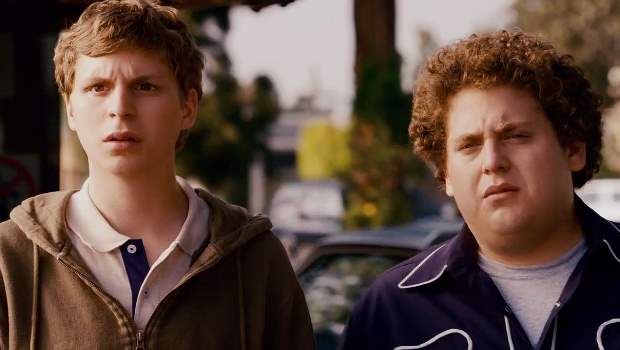 Apatow. What a great name. It sounds like it should have an exclamation mark at the end. Kerpow! Apatow! It’s the noise that Batman’s fist makes as its connects with the Joker’s nose.

Of course, its actually the name of the producer/director/writer/creator of a whole new sub-genre of romantic comedy, the sentimental gross-out film, Judd Apatow, here acting as producer on a film co-written by Seth Rogen, the nerdish but sweet star of Apatow’s sleeper sensation Knocked Up. Rogen and his buddy Evan Goldberg write the screenplay when they were, sickeningly, only teenagers themselves, and bought it to Apatow, who they worked with on Freaks And Geeks. It’s the story of two desperate high school boys, Evan (Cera) and Seth (Hill) and their last-ditch attempts to get laid before college. Keen to impress their objects of desire, the boys enlist the help of their uber-geeky friend Fogell (Mintz-Plasse), who has somehow managed to obtain an Hawaiian driving license and a whole new identity as a man who will come only to be known as McLovin’. Entrusted with all Jules’ (Stone) money for the party that night, the boys are terrified that something will go wrong, but even they can’t imagine the night that the fates have in store for them.

And that’s about it, really, plotwise. Like all Apatow’s work, the comedy comes only partly from the story and more from the characters. Seth is brash and crude, obsessed with girls; Evan clever, sweet and scared. Their co-dependency has gotten them through high school, but now this oddest of couples have been accepted into different colleges and are being forced to contemplate life apart. Their whole interaction is underscored by their fear, the resulting tension, and, on Seth’s part, jealousy that his smarter friend is moving up in the world, away from him, and won’t need him anymore; this vulnerability makes him likeable despite his general obnoxiousness and habit of drawing penises everywhere.

This vein of realism underpins Superbad and, as with Knocked Up and The 40-Year Old Virgin, is what makes it ultimately more than just another gross-out comedy or a lame coming of age flick. This is not the clichéd, tribal American high school of cheerleaders, jocks, and nerds. All the kids speak to each other even if they’re not specially good friends; everyone is invited to Jules’ party and she knows Seth and Evan’s names (though perhaps not Fogell’s…) The girls too feel refreshingly normal; they’re pretty, but not in a plastic Barbie way, and they are also very different from each other.

The acting – much of it improvised – is top notch with a special mention going to Christopher Mintz-Plasse in his debut role, and to Seth Rogen and Bill Hader as two out-of-control cops. But in the end, does it make you laugh? Oh yeah. It’s a little bit overlong, but its also choke-with-laughter hilarious, filthy, chock-full of loveable characters and, ultimately, genuinely touching and sweet.

DVD extras include behind the scenes, making of, extended improvised scenes, deleted scenes, commentaries, a gag reel, interviews with cast and crew and much much more. Featuring drawings of penises.