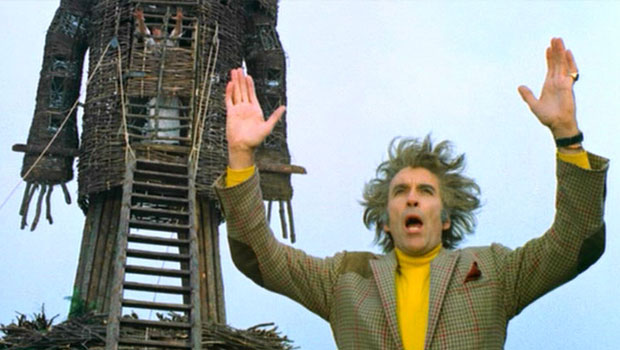 Summary: The Wicker Man in part of the national consciousness; its inclusion in Danny Boyle’s Olympic Opening Ceremony was just the confirmation of its status as a true original.

Sergeant Howie (Woodward), a devout, dour Christian, receives an anonymous letter reporting a missing girl on the remote Scottish island of Summerisle. He flies in to investigate, and soon suspects foul play. At every turn, he finds hints of the missing girl, but the villagers stonewall him. Worse, they are pagans; their very organic, lusty, cheerful way of life an affront to Howie’s grimly tedious moral code. Driving to meet the laird (Lee), Howie is outraged to see a group of nubile lovelies, including the school teacher (Cilantro), leaping through a fire in the middle of a stone circle, and questions this practice. The bland reply is that it would be stupid to jump through a fire wearing clothes… As the days pass, Howie becomes more and more suspicious that a sacrifice is being planned, and believes that Rowan, the missing girl, is being held somewhere…

The Wicker Man is the stuff of legend, of course, and it can be hard to separate the facts from the tall tales (there were never any caches of film under the M1). This new theatrical release is the definitive cut, including as it does some restored footage that, while not altering the story substantially, gives it more context. The early scenes with Howie in church with his fiancé establish his religion more firmly, while Lord Summerisle’s central role in proceedings is much more clearly demarcated in the ‘Gently Johnny’ scene where Willow (Ekland) sexually initiates a young Summerislander. The quality of the restored scenes is variable, but the additional depth they bring to the film is real.

There are musical additions too, and the original folk songs composed for the film are crucial to its weird and wonderful atmosphere. It’s not a conventional horror film; there’s no gore, just an all-pervasive, oddly cheerful tension. The clever thing about The Wicker Man is that Howie brings about his own tragedy; it is in his character, his stubbornness, and his self belief. The Wicker Man in part of the national consciousness; its inclusion in Danny Boyle’s Olympic Opening Ceremony was just the confirmation of its status as a true original. I truly envy people watching it for the first time.