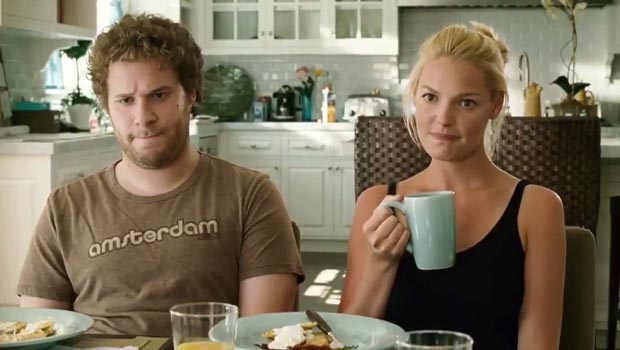 Summary: It is near impossible not to sit with a smile on your face for the whole of Knock Up.

Tapping into a fear of events that could ruin any drunken night clubbing weeks later, Knocked Up explores what happens when a chalk and cheese pair of strangers find themselves expecting a baby after one too many drinks on their first meeting. It’s been riding a wave of hype since a storming word-of-mouth box office performance in the US and rightly so: Knocked Up is possibly the best comedy of the year. Writer/director Judd Apatow has followed his hit comedy The 40 Year Old Virgin with another simple but hilarious story. It sees the odd couple of Ben (Rogen), a scruffy, overweight and jobless slacker, and Alison (Heigl), an attractive, mild-mannered showbiz TV presenter, facing a surprise pregnancy despite going their separate ways following a one night stand. The nightmare scenario is perfectly positioned to appeal to the anxieties of both sexes in a blend of romantic, gross out, slacker and chick flick comedy.

When Ben and Alison are first introduced, they couldn’t be further from meeting. Ben and his stoner flatmates sit around all day discussing movie trivia, watching movies and compiling a website that tells visitors where celebrities get their kit off in movies: they are the classic slackers constantly bickering with each other in a friendly way. Meanwhile Alison is going up in the media world, promoted to present a popular celebrity entertainment programme. When Ben and Alison meet in a club, chance dictates they end up on their own until the early hours and a bedroom fumble back at Alison’s house leads to the unwanted circumstances. Trouble is, they both realise in their hungover states neither is right for the other. Somehow they have to get to grips with bringing a new life into the world and their own relationship – if there is the chance of one. With Alison’s unhappily married friend Debbie (Mann) and Ben’s inexperienced friends for support, it makes for a rough ride.

Resisting any urge to look for just one laugh-out-loud moment per scene in a hit-or-miss sketch style, Apatow loads up every minute with one liners, witticisms, sight gags and observational comedy for quick fire entertainment sustained throughout. It’s rare to see a film so full of laughs and, like The 40 Year Old Virgin, Apatow lets the story take hold and the characters develop throughout, to keep it tightly focused. Ben’s and Alison’s friends balance the gross with the tender respectively: while Ben’s group discuss their near-porn website and give each other pink eye, Debbie helps Alison through the traumatic changes her life faces. It is near impossible not to sit with a smile on your face for the whole of Knock Up.

Ben and Alison’s attempt to have a relationship is the prime source of amusement, especially with their visits to the gynaecologist and tackling the frustrations of sex while pregnant. To hit the mark with situations like that is an admirable feat and another display of Apatow’s talent of seeing the funny side in everything. The 40 Year Old Virgin cast members make an appearance including Paul Rudd as Debbie’s reluctant husband Pete and a cameo from Steve Carell as himself, but Rogen and Heigl grab the chance to shine with both hands and don’t let go. By the time the birth scene serves up one of the most harrowing images of the birthing process and you still laugh, you’ll realise what a fine job the two leads have achieved under the expert guidance of Apatow: a smart and genuine comedy that appeals to all.