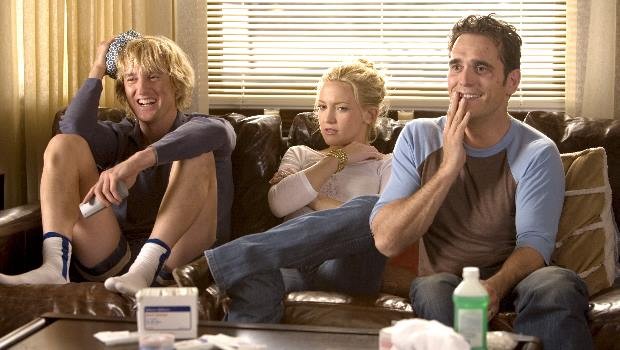 You Me and Dupree Review

Summary: In short, I can’t imagine why you’d bother going to see this film.

I was surprised by how long it took for me to really hate this film. The crucial moment, in case you’re wondering, came in the penultimate scene when the Coldplay song ‘Fix You’ played as Carl |(Matt Dillon) and Molly (Kate Hudson) were reunited after an argument. Don’t you see, the song has the word “fix” in the chorus and they were fixing their marriage!

For the less tolerant, there are plenty of other things to hate about You, Me and Dupree. For instance, Owen Wilson (the aforementioned Dupree) is playing exactly the type of character we’ve come to expect from him, the charming slacker. To be fair, he does this well (he has had plenty of practice) but unfortunately, this isn’t enough to save a particularly limp script that struggles to keep hold of its bog-standard sub-plots (husbands who’re under the thumb, trying to get along with a your father-in-law who hates you, etc).

The first half focuses on how Carl and Molly’s marriage is adversely affected when Carl’s best friend Dupree moves in with them shortly after they get married. His presence is seriously annoying for both of them at first. In the second half, with Carl putting in longer and longer hours at the office, Dupree and Molly begin to grow closer. Conflict arises, and requires resolution, etc.

Yep, it’s incredibly unoriginal. But that’s not what’s got my goat. Like a parent, I’m not angry at You, Me and Dupree, rather I’m disappointed with it. It was made by the Russo brothers who, between them, have directed a considerable number of episodes of Arrested Development, undoubtedly one of the most original US sitcoms of this decade. Even if you’ve never heard of it, I’d recommend you go and buy a copy as every aspect of it is brilliant; the performances, script, editing and direction are all flawless.

Everything about You, Me and Dupree, however, screams mediocrity. Even a chase scene through an office between Dupree and a Hawaiian security guard who looks eerily like The Rock (a scenario for comedy if ever I’ve heard one) fails to be funny.

In short, I can’t imagine why you’d bother going to see this film. Even if someone lends it to you when it comes out on DVD in a few months, I’d seriously think about what you’re doing before you pop it in your machine. In fact, you should probably also think about whether you should be friends with someone who owns it. If they didn’t get it as a present from their gran, you should probably try to avoid any future contact with them.