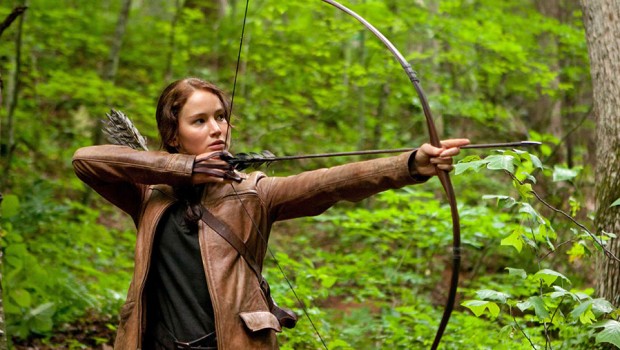 Summary: It's a rare thing, a Hollywood film that entertains and provokes.

Suzanne Collin’s trilogy, The Hunger Games, has frequently been compared to Twilight, mainly because they both feature teenage heroines and romance. In fact, they are as different as chalk and cheese; Though it nods to Battle Royale, The Running Man, The X-Factor and Gladiator, The Hunger Games has its own fresh take on the issues, and provides us with a heroine for our times. Katniss Everdeen (the marvellous JenniferLawrence) is everything Bella is not; tough, capable, single minded and perfectly able to take care of herself. And she needs to be…

Katniss lives with her mother and younger sister Primrose in District 12 of the Republic of Panem. Ruled from the distant Capitol, the twelve districts exist to service its needs. As punishment for an earlier uprising they are forced to send two children, aged 12-18, picked in a lottery called the Reaping to take part in the Hunger Games, a televised gladiatorial fight to the death. When a terrified Prim is chosen, Katniss volunteers to go in her stead, and finds herself literally swept away, taken by train to the Capitol, where she and her fellow tribute Peeta (Hutcherson) will be groomed, trained, introduced to the world, and sent, like pigs, to the slaughter. Initially out of her depth, Katniss soon finds allies in Haymitch (Harrelson), victor turned mentor, and Cinna (Kravitz) her stylist. But its when Peeta confesses to a secret crush on her that her stock really rises. In order to win, Haymitch explains, a tribute needs to be popular. Star-crossed lovers from District 12 will sell to the audience, to the media and to sponsors.

Sound familiar? (Apart from the whole death part.) It should. This is the reality tv show to end all reality tv shows. Katniss and her fellow tributes are paraded in front of a studio audience. Bets are placed. Celebrity is instant, and instantly seductive; even the taciturn Katniss enjoys the chariot ride where she and Peeta, clad in real fire, are lionised by the crowd. Suddenly she is ‘the girl on fire’, dressed in beautiful designer clothes and eating the finest foods. The contrast between the hardscrabble districts and the decadent, glossy Capitol is illuminating – this is a world where some people have nothing to do but adorn their bodies and others work like dogs for subsistence wages. District 12 resembles nothing so much as pictures from the Depression, while the Capitol is all obscene abundance, ancient Rome crossed with Georgian England. And then, all too soon, the tributes are entering the arena, wished without a flicker of irony, happy Hunger Games.

It’s a rare thing, a Hollywood film that entertains and provokes. It’s also a very clever adaptation; rather than a by the numbers page to screen transfer, the story is opened out. In the book, we only see what Katniss sees, but here we go behind the scenes in the tv studio, where we see the quiet pleasure the gamemakers take in a job well done, forgetting that they are unleashing giant killer dogs on defenceless children; that their actions have consequences, that this isn’t just a game.

People regularly complain that films can’t be both entertaining and clever. The Hunger Games exists to prove them wrong. Please go and see it.