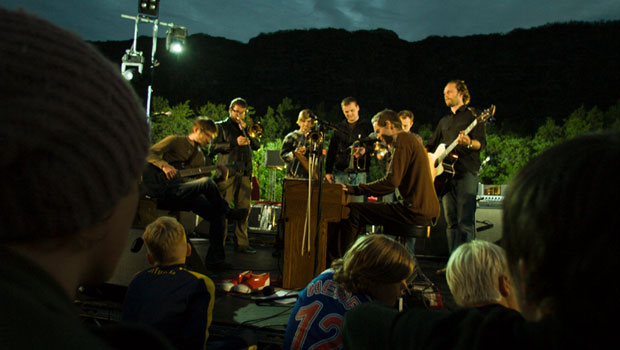 Summary: There’s something inspirational about the band too – instead of shedding their roots, they’ve come right back to them, and are giving something back to the land, and the people, that made them.

If you don’t think you know who Sigur Ros are, think again. Last summer: Planet Earth trails on the BBC, with that heart-string-tugging music swelling as some poor baby wildebeest gets chomped by a crocodile? The trailer for Children of Men? Closing credits for the FA Cup Final? The Oxford and Cambridge Boat Race? Pretty much anything where advertisers are trying to evoke a sense of triumph? Odd songs, with no comprehensible lyrics, but a sweeping grandeur lead by an unearthly, beautiful vocal? Well, then you do know who they are. Told ya.

Me, I am a big fan of the band so I was delighted when I found out that they were releasing a dvd. And even more pleased when I discovered that, unlike most music dvds, it was a proper documentary film of the tour of Iceland that they did in 2006, on the back of their best-selling album, Takk (from which Hoppipolla, probably their best-known song, as discussed, comes). The band hail from Iceland, and its one of the truisms about them that their music and the Icelandic landscape are in some way one.

Sigur Ros set out to tour some fifteen locations, performing for free in all sorts of places including community halls, national parks, a canyon next to the Arctic Circle, ghost towns, disused herring factories, and middle of nowhere highland landscapes. The wonderful thing about the free concerts is that lots of people who you can’t imagine going to a concert if they had to pay turn up, grannies right through to babies, listening entranced to this absolutely epic music (which I am playing as I type). The band comment on how ‘nice’ this is. And it is nice. Icelandic people look so sweet in their cosy jumpers.

Cleverly, someone decided that in addition to the performances – which would, in truth, be plenty – to intersperse this with incredible shots of Iceland’s magical, desolate landscape, and then the talking heads segments, which give an insight into the minds of the four slightly odd blokes who are Sigur Ros: Jon Por Birgisson, better known as Jonsi, Orri Pall Dyrason, Georg Holm, and Kjartan Sveinsson. We see them messing about with instruments and rehearsing and having fun, which is lovely, as you might think from the music that they are a bit serious. But they also comment on the destruction of the landscape; the fact that there are no more fish, so towns die. They perform for people protesting the building of a dam in unspoilt country. A hideous aluminium factory in the middle of ravishing countryside.

And then there’s Iceland. I’ve never really wanted to go to Iceland before watching this film; now I do. It looks strange. Ancient. Almost alien. It’s a cliché to say like something out of Tolkien, but it’s a cliché because it’s true – Middle Earth was inspired by Tolkien’s love of ancient Norse and Finnish language and legend, and so we come full circle. There’s something inspirational about the band too – instead of shedding their roots, they’ve come right back to them, and are giving something back to the land, and the people, that made them.

Directed by Dean DeBlois, who oddly enough made Lilo and Stitch, this is a beautiful and moving film. An ode to ‘heima’ – Sigur Ros’ home.

Disk one is the film, including commentary by the band’s manager. The film includes two exclusive new songs ‘Guitardjamm’ and the traditional ‘A Ferd Til Breidarfjardar 1922’. The second disk of extras contains all the songs from the film, exclusve new performances, and a brand new track ‘Heima’, as well as documentary footage anf a gallery of tour photos and production notes.