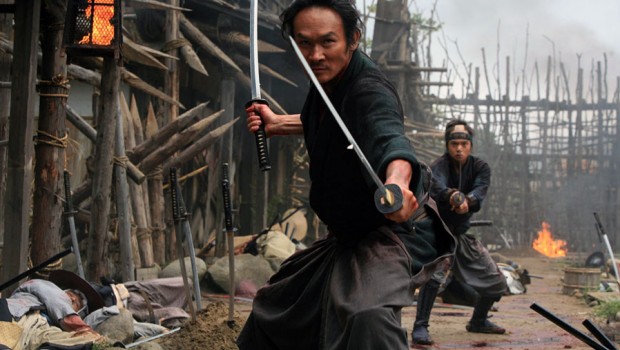 Summary: Takashi Miike delves into his nation's past to create a noble movie that will please fight fans but gives so much more thanks to a compelling story.

Takashi Miike has brought sensationally violent movies to the screen in the past, yet has always been driven by a desire to ensure the characters committing crimes are given a voice and reason for their actions. His ability to tell a story amid blood-letting has been applauded and, for a change, he gives brings his storytelling to the fore with 13 Assassins as a 50-minute battle finale comes after an extremely well-worked build up recounting a plot to assassinate Lord Naritsugu, the younger brother of a 19th Century Shogun who uses his status of being above the law to rape and murder for his own sadistic pleasure.

The first hour is almost purely driven by character development as we are introduced to samurai of varying rank who serve the Shogun. Although there are mumblings that Naritsugu (Gorô Inagaki) should be punished for his actions after a senior official commits suicide by the ritual of hara-kiri, one of his closest advisors, Hanbei Kitou (Masachika Ichimura), forbids any act against him because of his status. It is left to a man whose son and daughter-in-law were killed by Naritsugu to seek out wisened Shinzaemon (Kôji Yakusho) who rounds up 12 other willing samurai to assassinate the hated figure en route to Edo where he will be given a higher rank and effectively untouchable. However, when it emerges the 70 guards they expect to face has ballooned to 200, they must set a series of traps in a village to try to overcome their opposition despite being heavily outnumbered.

While it is undoutbedly the epic battle sequence Takashi Miike creates as the 13 samurai use every trap and trick they can to gain an advantage against Naritsugu’s protectors in a bid to get to their man, the outcome of the fight would not be as compelling without the proceeding hour of discussion and warnings between the noble figures as they come to turns with their mission and its repercussions, both for Japan’s power structure and their own fates. When they raise their swords in anger, they fight for the future of their country and to retain the respect for the underfire Shogun dynasty which cannot expect to be taken seriously with Naritsugu alive. Filmed with inspiration from Akira Kurosawa’s Seven Samurai, Takashi Miike delves into his nation’s past to create a noble movie that will please fight fans but gives so much more thanks to a compelling story.