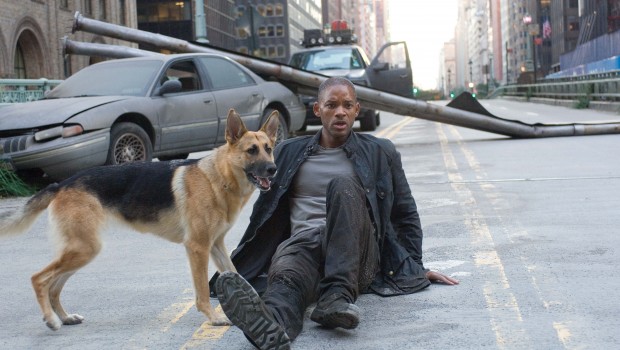 ‘Infected’ is the horror genre’s buzzword for the 21st Century. Big-budget film productions are gradually backing away from the classical monsters that defined early horror, the studios apparently fearful of kitsch, B-movie associations and sub-genre pigeonholing. As Will Smith wanders the deserted streets of New York City in Francis Lawrence’s I Am Legend, an assault-rifle slung over one shoulder and his faithful pooch padding alongside, his nights are haunted not by the vampires of Richard Matheson’s original novel, but by infected humans referred to as ‘dark-seekers’, a pretentious phrase seemingly designed to avoid the word ‘vampire’ at any cost. Although aversive to sunlight, they’re in fact more zombie than vampire, victims of an apparent cancer cure that backfired spectacularly and ushered the apocalypse.

The third film adaptation of Matheson’s 1954 novel, I Am Legend saw a decade-long development phase that was delayed even further by the release of Danny Boyle’s 2002 low-budget horror 28 Days Later… . A superior film made for a fraction of the cost of Lawrence’s adaptation, screenwriter Alex Garland borrowed heavily from Matheson in crafting his story of a young man who wakes from a coma to find London deserted. The UK has been evacuated in the aftermath of a savage plague – viscerally referred to as ‘Rage’ – which, upon transmission of infected blood, almost instantaneously strips victims of their humanity and turns them into rabid, demon-eyed, blood-vomiting monsters. It was a shocking vision amplified by a gritty digital format. The film has become a seminal entry in the modern horror genre – finally spawning a belated sequel last year – and ushered a new chapter for the cinematic undead as a source of serious horror. Not that the monsters have at any time been referred to as either ‘undead’ or ‘zombies’. Instead, as with the ‘dark-seekers’ of I Am Legend, they were merely ‘Infected’, knocked several steps down the evolutionary chain by a virus.

George Romero himself took inspiration from Matheson in creating a horror icon when he critiqued America’s involvement in Vietnam in 1968’s Night of the Living Dead, and then satirized Western consumerism a decade later in Dawn of the Dead. Similarly, 28 Days Later… arguably captured the 21st Century zeitgeist. In the aftermath of 9/11, and in the months preceding the invasion of Iraq in 2003, the fear of weapons of mass destruction, chemical warfare and infection, dominated headlines across the Western world. The Bush Administration insisted Saddam was stockpiling unpleasant chemicals in the Iraqi desert, and tabloids speculated on the likelihood of a terrorist ‘dirty’ bomb hitting London or New York. As though feeding from this dark collective fear of what reprisals the War on Terror will bring to the West, both 28 Days Later… and I Am Legend offer striking images of deserted urban landmarks plastered with billboards warning of infection. The end of the world is a sight the camera soaks up with relish.

The ‘zombie’, the ‘infected’, the ‘dark-seeker’, or whatever name is chosen to ease the route to box-office success, is overdue a serious resurgence. For nearly two decades from the late 1980s, the zombie was effectively confined to the annals of cinematic ridicule, perhaps owing to the torrent of lazy parodies and trashy TV movies that plagued the 1990s (Space Zombie Bingo, anyone?). 28 Days Later…made the zombie scary again, and the film’s massive stateside success was clearly interpreted by the studios, albeit with a characteristic laziness. A remake of Dawn of the Dead hit multiplexes in 2004, jettisoning the consumerist satire of Romero’s original to concentrate on snarling horror that seemed directly inspired by Boyle’s brutal hit.

Once again, however, it was the British who broke new ground in the genre. Comedy duo and Romero-worshippers Simon Pegg and Edgar Wright, released the London-set zombie-homage Shaun of the Dead in 2004. A quirky, hilarious and surprisingly violent affair, the film was billed as a “romantic comedy with zombies”, telling the story of a young man attempting to fix his relationship woes with the added inconvenience of the undead roaming the streets of London. Like 28 Days Later…the film was embraced by the Americans, and even played a part in convincing Romero himself to direct a fourth zombie film of his own. Land of the Dead was released in 2005 to mixed reviews. Indeed, it lacked the satirical punch of his previous outings, although it marked a return to the classic lumbering zombie that suddenly proved no less terrifying than the rabidly hyperactive victims of 28 Days Later…

I Am Legend can, in a sense, be considered Hollywood’s response to 28 Days Later… While similarly dramatic in its depiction of a deserted urban landscape, this time New York, Smith does a good job exploring the psychological elements of the story. Unfortunately his strong performance is undermined by a film that crumbles under the pressures of mass-appeal filmmaking. Abandoning Matheson’s vampires on purely commercial grounds – the studio didn’t want the project pigeonholed as just another vampire movie – the resulting ‘dark-seekers’ are disappointingly digital, looking as though the visual-effects department handed in only half-finished homework. Still, having proved a huge hit across the world including a new comic book series “I Am Legend: Awakening” based on graphic novel of the same name, a sequel seems almost inevitable. There is, it would seem, life in the undead yet.