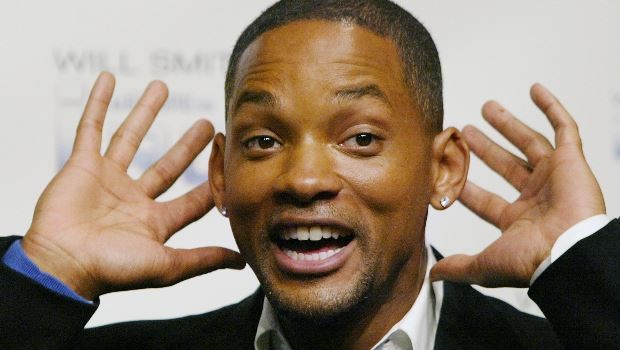 Will Smith is quite possibly the biggest star in the Hollywood firmament and as he bounces into the conference room at the Dorchester it’s easy to see why. The energy that flows from him is palpable and he radiates charisma and good humour, waving to the room like the queen and bellowing ‘hey’ at every opportunity. Director Francis Lawrence (Constantine) and writer Akiva Goldman look on with a kind of benign amusement, but Smith’s energy is part of his charm. ‘Will told me this story about working with Robert Redford, When he comes on set, he comes running in, with everyone who comes with him chasing him, and he’s usually singing and laughing very loudly. So Redford calls him over, and says, ‘You know, when you come on set, you make a LOT of NOISE’.

Will Smith, in Stepandfetchit tones: ‘And I said, I’m sorry Mr Redford.’

‘He’s that way when he’s doing the most heartbreaking, intense, difficult scene; he’s so much fun to be around. He can switch right into character, and right back again.’ Lawrence continues. And the fun continues right through the press conference as Smith continually interjects, interrupts, prances off down tangents and generally seems to enjoy himself. Where does he get all the energy from, especially now he’s getting a bit older – there’s even a bit of grey in his beard – is he ever tempted to just let it go?

‘Of course, it’s not real grey – I have a company that comes in and does that for me.’ Smith grins. ‘I feel that everything in life begins with physical conditioning. I love eating sweets but I feel that everything –the quality of my parenting, my relationship with my wife, the quality of all the interactions I have in my life start with me being in great physical condition. Even doing a junket is a physical, athletic event. In the last eleven days, we flew Tokyo, Hong Kong, LA, NY, London, Madrid, Paris, London. To me, you can’t do that if you’re not in good physical condition. So I believe that it’s the beginning of finding happiness and the things that I desire in my life. And you know, when the ladies say ‘woo!’ that turns me on a little bit… I like that.’

In I Am Legend, Smith plays Robert Neville, the last man on earth after a man-made virus wipes out most of the human population and turns the rest into zombies. Neville is determined to find a cure; does Smith like saving the world?

‘It’s funny that people think I save the world in this movie; everybody’s dead! Robert Neville failed miserably! But as far as my attraction to this kind of role: Star Wars really spun me out as a child. I just couldn’t believe that someone created that. I mean, where do you even pull Jabba The Hut from? So I’ve always been inspired by science fiction – I’ve been chasing Star Wars my whole life.’

The film is based on a novella by Richard Matheson, which has already been made into a film three times, most famously The Omega Man, starring Charlton Heston. How much were the filmmakers inspired by previous versions of the story?

‘Our movie is a mixture of the novella and Omega Man, ‘ Smith explains. ‘All the previous versions were genre – either horror, or action. We wanted to look at the psychological deterioration of a character, and make the small art film version of this movie and then put all the blockbuster packaging around it. We were just very specific to never say that to anyone at Warner Brothers…’

Francis Lawrence continues: ‘We were intrigued by the central ideas of Richard Matheson’s novel, the idea of being the last man on earth, the scientific reasons that these creatures were monster like. Once we were all on board, we started to look at the other materials. There are some great things in The Omega Man, the opening sequence where he’s driving round LA, we pay homage to that in our movie, the mannequins – we use them differently, but we bring them in also. And then we have our own ideas – what happens to someone when they survive alone. Thematically, there’s a dividing line between I Am Legend and The Omega Man, The novella is darkly hopeless, The Omega Man is darkly hopeful. The ending of our film could be seen as positive. We liked the idea of the evolution of the story over time.’

Naturally in adapting a novella to film, certain changes have been made. One of the biggest, and potentially most challenging to the filmmakers, was the decision to move the setting of the film from Los Angeles to New York.

‘The city was really cooperative. Its funny when you watch the film, it’s very quiet, but the reality is that just out of shot are hundreds of New Yorkers trying to go to work and school honking their horns and yelling at us’, Lawrence explains.

‘I didn’t feel too bad,’ Smith interrupts, ‘cos everyone was kept saying ‘Will, you’re number one’. He gives the room the finger and grins hugely. ‘The city changes the story, it brings a different kind of energy. New York, empty, is as haunting an image as you can imagine. You realise that you’ve never seen a New York street empty. Even when New York is quiet, its not really quiet, there’s a hum, horns in the distance. The first five or six images that start the film – the audience goes dead silent – it just jolts you into the film. New York was perfect, I can’t imagine where else you would shoot it.’

Goldsman elaborates, ‘The novel is set in LA for clever literary reasons – it’s the city of lost souls, it’s American desolation – but filmically it’s very difficult to make Los Angeles iconic, and it’s also always abandoned – I mean, LA at 4 o’clock on a Thursday looks like the end of the world. By moving it to New York, it’s an engine under every scene. The accumulative effect of those very nicely not oversold, but always present, empty spaces start to get into the bones of all of us.’

There are also plot lines hinted at in the film which are not really developed –was this deliberate?

‘The central theme of the movie is not the theme of the book. So we acknowledged that – you can track how we laid down the groundwork for ideas we liked but ultimately aren’t what the film is about.

Smith being a man who thrives on an audience, how did he cope with spending so much time alone?

‘I was intrigued by it. I grew up in a house with three brothers and sisters, very few moments in my life have I really been alone. My family stayed in LA for the first couple of weeks and I was in an apartment by myself, and I realised how much I neglect my feminine side…’

Goldsman interrupts to shush Smith and the two of them have a little argument. Lawrence explains his motivation thus:

‘It was an idea that we all got excited about very early on – telling a story with only one character – and we got inspired by the idea of trying to make a silent film –the way they created a narrative and expressed emotion intrigued us. So we had to be very sharp with the emotion we were trying to create in each sequence and then Will had to translate that into behaviour without relying on dialogue to express how he was feeling. It was a fun way to explore isolation.’

‘I wrote a lot of dialogue for the dog,’ adds Goldsman.

‘It was really challenging to write scenes with no dialogue, especially for an American screenwriter – we like to overexplain everything.’

Smith then demonstrates how Goldsman blocked out a scene, playing himself, the Alpha Male, and the dog. It’s a career best performance from Smith; how difficult was it for him to be alone on screen for over an hour?

‘I always look for an ‘in’’ Smith explains, ‘and I did research with people who had been in solitary confinement. Two things came out: one, everything has to be done to a schedule and two, you give life to anything around you. Your mind, in order to defend itself, gives life to inanimate objects. And that for me solved the issue of stimulus and response – you create it yourself. So then I wrote pages of dialogue going on in my head – a glass asks me what time it is, then I have an argument with myself about whether to answer it or not – it comes across as silence on screen, but gives all these machinations, giving life to the scene, leading to these wonderful outbursts.’

The film has been doing fantastic business, which Smith admits is a relief. ‘With it being me alone on camera for the first hour, if this film was rejected I would take it that people were rejecting me, rather than it just being that they didn’t like the film. So it was a huge relief for me when we got the figures.’

With The Pursuit of Happyness and now I Am Legend, Smith has been keeping it in the family working first with his son Jaden and now with daughter Willow. She, apparently, wasn’t phased by the potentially difficult subject matter of the film.

‘Willow doesn’t care. She’s the type of child; we were in the house one night, and I heard her footsteps, her getting up, but I thought she was just getting a drink so I went back to sleep. It’s about 3 o’clock in the morning and she comes in and wakes me up. “Daddy” ‘Yes baby” “I watched a movie by myself” “That’s good baby” “I love The Sixth Sense”. No fear or discomfort at all. It was great as a parent to be able to work with your child.’

His recent projects also reflect an increasingly dramatic bent; is the move away from comedy deliberate?

‘I’m absolutely looking for things that are different. The success of Men In Black was based on that time, my age. If I don’t keep advancing, moving on, people will reject the work that I do.

I’ve gotten intrigued by the relationship of trauma and story. Trauma is the beginning of all our existences, it’s a character engine, it’s a beautiful way to start designing stories. So it naturally leads to a more dramatic type of film. But Akiva and I have also been working on a dark comedy called Hancock – coming soon to a theatre near you – about an alcoholic superhero,

I probably won’t create new music but I will be on tour with my old music – not my old music, my *classic* music – later this year.’

And with that, Will Smith bounces off to get ready for his premiere.