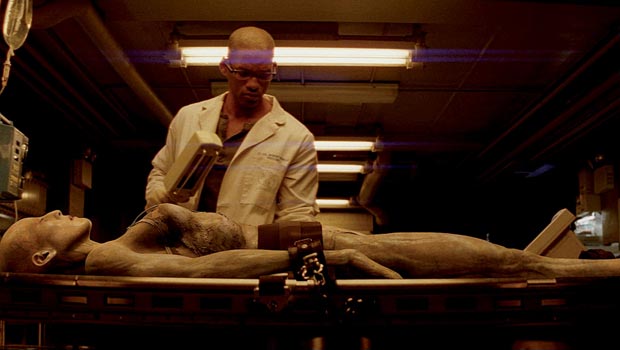 I Am Legend Review

Summary: It’s a powerful and ultimately uplifting film, despite the weak last third.

Immediately after watching I Am Legend I went to a bookshop and bought myself a copy of Richard Matheson’s classic novel. Greater praise hath no man. It’s quite different from the film, mind, but not in a bad way.

New York City, 2012. Robert Neville (Smith) gets up every morning. Does his exercises. Eats breakfast. Listens to music. Takes his dog Sam out for walks, and to pick up supplies. Goes to work. Plays a little golf. Sends out a broadcast on the radio. Nothing so unusual about any of this, I hear you think. Well, no. Except that Robert Neville is, as far as he knows, the only living human being on the planet. He and Sam are entirely alone, and have been for three years.

In 2009, a scientist called, ironically, Dr Krippen (Emma Thompson, in an uncredited cameo), announces that she has discovered the cure for cancer – a retrofitted virus that is initially hailed as a breakthrough in modern medicine. But it isn’t long before the virus has mutated into a deadly airborne form, killing millions of people. Neville, a military scientist, is part of the team working to find a vaccine, but as the pandemic spreads, the government orders Manhattan locked down, with only the uninfected allowed to evacuate.

Those who the virus didn’t kill, it changed…

And now Neville lives alone with Sam, surrounded by strange, primal creatures who dwell in darkness, only emerging at night to eat. But Neville is determined to find a cure. He knows he is immune to the virus, he just doesn’t know why. He has set up a lab in his basement, and is determined to find a cure, testing various strains and solutions of his blood on infected rats. And one day he has the breakthrough he has been hoping for, and can start testing on humans…

Will Smith might seem like an odd choice to play Robert Neville (in the novel, apart from anything else, he is blond and blue-eyed) but actually his performance is excellent and completely believable. It’s easy to forget that Smith is actually a fine actor, and that his range is not just limited to action films. That said, there is quite a lot of action in I Am Legend, escaping from the infected, hunting deer (and Smith has clearly been through a gruelling training regime – the man is buff) but its in the quiet moments that Smith really shines. His face is more drawn than usual, and he’s clearly fighting for his sanity everyday.

The design of the film is absolutely superb. Danny Boyle did it first, and I Am Legend surely owes him a debt, but the scenes of New York with grass growing up between the paving stones, the buildings rotting, herds of wild animals rampaging between the abandoned cars are incredibly impressive and the budget here stretches to helicopter shots which obviously Boyle’s did not. Neville harvests sweetcorn in Central Park and fishes for carp in a museum. But all the while he keeps an eye on the time, for darkness is coming.

Cleverly the infected are only revealed bit by bit. First just as howls and screams drifting across the city. When Neville is forced to venture into a building to save Sam, we see more, but only in flashes from his torch. Far, far more scary to only see them in bits, and this scene has some great jumpy moments. As usual, once we can see them properly, they’re less interesting, but by then the story has taken a new turn – Anna (Braga) and Ethan (Tahan), survivors, hear his broadcast and come to find him. Though he has been desperate for company, after three years of complete isolation Neville finds it hard to cope, but now he has something else to live for.

Like all the best science fiction, I Am Legend says a lot about the times we live in, from the dangers of genetic tampering to our fear of pandemic diseases, from scientific rationality to irrational, but very human faith. It’s a powerful and ultimately uplifting film, despite the weak last third, and a disappointingly cheesy ending; a superb central performance by Will Smith, and acting awards for an Alsatian called Abbey, who steals every scene she’s in.

Related
Will Smith, Akiva Goldsman and Francis Lawrence discuss the making of I Am Legend