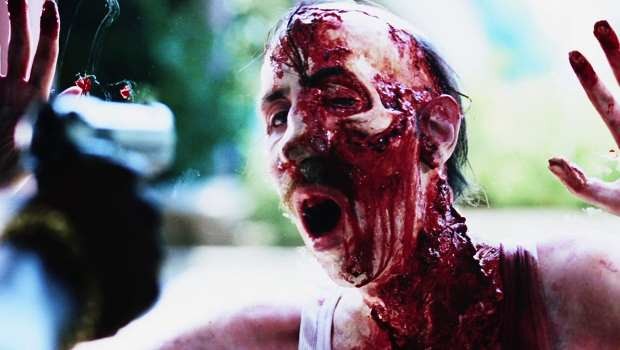 Summary: A gore-ridden action flic with blood and body parts used as punch lines to create a highly enjoyable death fest that everyone who can stomach the sight of blood will enjoy.

‘Dawn of the Dead’ is one of my favorite films. Of all the films out there, for some reason there’s something about the 1978 zombie flick that gets it right. People I have spoken to about the original have had two reactions. Some like the atmosphere Romero manages to inject into the film. Being filmed largely inside leads the viewer to sense the oppression that we see the characters endure. Combine this with the long periods where the characters seem in no immediate danger only for something truly terrible and usually gore ridden to happen, leaves the film with an accumulative effect of fear and repulsion.

However others I’ve spoken to have been bored! Entertained by the excessive and extreme violence they admit they enjoyed the comedy of the film but refuse to agree with me that it is also a beautifully shot and expertly paced horror movie.

So what for these dummies that refuse to find zombies scary? A remake? Perfect. Modern techniques employed to breathe fresh life in to the zombies. We’ve already seen 28 Days Later resurrect the zombie, making them faster, crazier and more bloodthirsty than ever before. Resident Evil, (a film version of a computer game that owes a lot to the original Night of the Living Dead), used many of the scares and tricks that we see Romero using in Dawn of the Dead. The zombies are already here. Perhaps the reworking of one of the best Zombie films has been long overdue.

So, does the new Dawn of Dead succeed in striking fear into your heart as you watch the terrible events of the last few days of human kind unfold? Well… no. The new film is not much scarier than the original. There is more than a fair share of blood and body parts. An expansion of the characters involved in the massacre means more cannon fodder for the horribly conceived deaths and serious injuries to be realised on. A larger contingent of blood-crazed zombies with an increased desire to rip the flesh from any unfortunate that happens to be within biting distance also adds to the action. But the original film has been changed.

No longer do we have four characters trapped alone in a shopping centre: two members of SWAT, a pregnant news reporter and a helicopter pilot. Instead we have around eight or ten people, some security guards, a cop, a nurse, a father, an old guy, a guy that owns a boat and a pregnant lady, to name the ones I can remember. And instead of all being trapped in the shopping centre they are divided between here and a gun shop. These changes only help to reduce how much you care about them being eaten and their frequent jaunts outside reduce any feelings of helplessness and isolation.

Horror movies are not all about identifying with the characters though. I know that in the short term I would probably be more scared of a six foot tall American football star haring towards me wanting to chew off my eyelids than of isolation. This is where the new Dawn of the Dead gets it right – the fear of being eaten is pretty much constant. In the original there is a period where there is not a zombie in sight for about 20 minutes. The remake even manages to squeeze a quick sex scene in between someone being set on fire and someone else being busted in the head with an axe.

The constant action and movement from one horror scene to the next makes the new Dawn of the Dead engaging and in places repulsive and sickening. There’s never really time to do any thinking about the plight of the characters or survival of the human race: people keep dying just too damn quickly.

Dawn of the Dead the remake is very different from Dawn of the Dead but fans of the original should be pleased with how much is drawn from Romero’s version. We are even treated to a cameo by Tom Savini, the special effects man and leader of the biker gang in the original, helpfully explaining how to kill the living dead via a television broadcast, a device used in both Night of the Living Dead and Dawn of the Dead. Those who haven’t seen or don’t like the original won’t notice these references, and won’t be missing out, having been distracted by the horrifying plight of a man and his pregnant wife…

The zombies we have today are faster, bloodier and more violent than zombies from the past and so are the zombie films. Dawn of the Dead is a gore-ridden action flic with blood and body parts used as punch lines to create a highly enjoyable death fest that everyone who can stomach the sight of blood will enjoy.