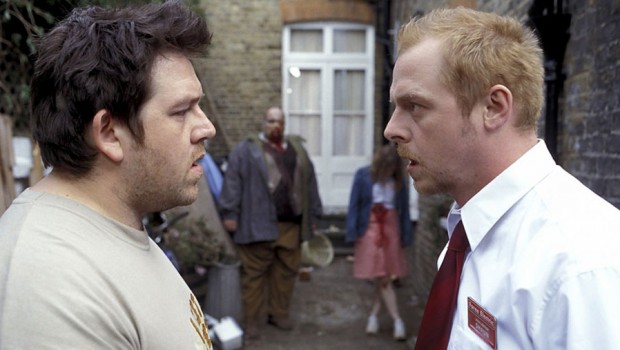 Shaun of the Dead Review

Well it’s arrived. A British comedy that is actually funny. Not only that, but it’s clever, funny, anarchic, funny and refreshing. And it’s funny too.

Now, I know what you’re thinking, but you can never overstate the fact that a British film is actually laugh-out-loud funny. While we Brits have always been able to nail television comedy, whenever those same unquestionably gifted talents venture onto the big screen, the results are on the whole pretty forgettable (The Parole Officer, Bean) and in some cases, truly diabolical (Guesthouse Paradiso, anyone?). This time the creative team behind the brilliant Channel 4 sitcom Spaced have turned their hand to crafting a genre flick. Tagged ‘a romantic comedy with zombies’ or ‘zomcom’, actor Simon Pegg and director Edgar Wright have written and shot a film that really hits the mark, both in terms of gags, entertainment and enough nods to Romero’s classic trilogy to keep the film geeks smiling in that smug way that only film geeks can.

The film starts like many an episode of Spaced – Shaun (Pegg riffing on his Tim character in the series) is a frustrated but affable chap who’s been dumped. Not only that, he hates his job and is also having to deal with in-house tension between his oldest mate Ed (Nick Frost – another Spaced regular and Pegg’s real life best buddy) who is an unemployed slob, and his university mate Pete (Peter Serafinowicz – bizarrely, the voice of Darth Maul in The Phantom Menace) who has become an anal city boy. Just when you think it couldn’t get any worse – everyone around him starts turning into the walking dead. Shaun’s first thoughts are to rescue his ex-girlfriend, and so, with the help of a few friends and enemies, he goes on a heroic quest through North London, armed with only a cricket bat and a bad tie.

Like Romero’s classic trilogy, news footage is used to move the narrative along, but with no real explanation given as to why this army of the dead has manifested itself – it’s just happened, so deal with it. Also, these zombies are just as dopey and slow-moving as their predecessors and the cast have a wonderful time dispatching them back to hell in gory fashion, using household objects, cars, pool cues and in particular Shaun’s vinyl collection as shurikens. And if it is gore you want, then this film doesn’t disappoint, ticking all the checkboxes for a zombie movie: impalings, decapitations and whole torsos being ripped apart by ravenous zombies. The only difference here from Romero’s films is that these characters react the way we the audience do – being horrified yet also, in the end, quite enjoying the carnage.

Technically, the film also imitates the fast-paced styling of Spaced. Affectionately paying homage to Requiem For A Dream, the film is peppered with the same rapid jump cuts as various characters indulge in their particular vice – usually in this film a cup of tea. Every now and then references to Dawn of the Dead can be spotted for the eagle-eyed geek boy, such as the firm Shaun works for being called Foree Electronics (for those of you with a life, Ken Foree was the name of one of the main actors in DOTD).

But it’s in the belly laughs that SOTD really stands apart from standard British comedy films. There are sight gags a plenty, most notably the first time Shaun and Ed encounter and kill a zombie and the hilarious synchronised beating to death with pool cues of an undead pub landlord to the sounds of Don’t Stop Me Now by Queen; the script is also intelligent and witty. Pegg is a great natural comic and his performance here is excellent, but he is more than matched by the supporting cast, in particular Frost, Black Books’ Dylan Moran as a supercilious know-it-all and the great Bill Nighy, fresh from being the only funny things in Love Actually, as Shaun’s step father.

If there is any criticism of this film, it’s that the romantic side of this ‘zomcom’ doesn’t work too well. It never really gets a chance to breathe as a plot strand in it’s own right from amongst all the visceral action, but it’s well-acted enough not to seem too out of place. Overall, this is a great little film that delivers on all fronts and one hopes that this film will open up the British film industry to finance more daring projects other than those written by Richard Curtis.