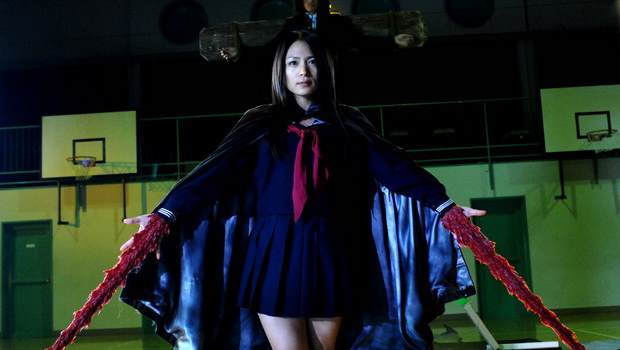 Summary: You'll need a stomach for extreme slice-and-dice action combined with off-the-wall ideas, but this is entertainment like nothing else.

The Japanese have always been considered outlandish and zaney with their movie tastes but a recent glut of ultra-violent offerings has delivered cult classic affter cult classic. The Machine Girl saw a school girl go on a mission of vengence with a minigun for an arm, and Tokyo Gore Police was a delightfully OTT mutant fight fest and Spain got ino on the act when a Sexy Killer went on a murderous high school rampage by bedding boys and taking their lives to satisfy own desires. Now Nishimura, the man behind The Machine Girl and Tokyo Gore Police, co-directs a similarly blood-filled and wacky face-off in the form of Vampire Girl vs. Frankenstein Girl, a deliriously hyperactive battle between two school girls over a boy which escalates to a brutal climatic confrontation that can’t fail to impress fans of the Japanese taste in extreme cinema.

Billed as a response to Twilight and Let the Right One In, Vampire Girl verses Frankenstein Girl has a title more apt of a computer game beat ’em up than a feature length movie, though it plays out a lot like one by the end of its twisted fun. High school student Mizushima (Saito) unexpectedly gets a Valentine’s present from new student Monami (Kawamura) despite having a girlfriend already – the jealous-type Keiko (Otoguro). Unknown to Mizushima, Monami is a vampire who has laced the chocolates with her blood to infect him and win his love — and she’s not set to let her desires be ignored. She sets about winning over Mizushima from Keiko while in the background the race for title of the wrist slitting champion hots up as girls line up to prove their wrists are made of iron when set against the cutting action of a blade. If this sounds like a cross between a typical high school fantasy story and distrubed minds you’d probably be right, but there is a lot of fun to be had along the way if you can handle the dementia of it all.

Until Keiko sees Monami kiss Mizushima it’s a film which leaps around from odd situation to another when not dealing with the central love triangle, but with good reason: it’s all build up to an epic showdown between Keiko and Monami as the title suggests. Monami makes up the vampire side, while Keiko’s Frankenstein status involves an envious lunge which requires urgent attention from her mad scientist father who fashions her a new body with which to fight Monami. Limbs as head-mounted helicopter-like roter blades, lungs emitting car emission fumes and extending arms salvaged from a string of murders give Keiko the special moves, though the question becomes will they be enough to overpower Monami’s vampiric abilities atop Tokyo Tower.

Immensely entertaining but completely insane, Vampire Girl vs. Frankenstein Girl is like a manga comic brought to life and blended with teenage angst. If you’ve seen Nishimura’s work before, you’ll know he can’t resist one-on-one battle action ending in the hacking off of limbs or the slicing of heads in half by some wild imaginative bodily appendage, and he lets rip once more here at one point showing a body literally dissolve as it is attacked by acidic blood. There was a danger Vampire Girl vs. Frankenstein Girl might struggle to live up to the mad concoctions already spawned from Nishimura’s imaginations, however it ups the ante thanks to input from Naoyuki Tomomatsu, the writer/director of Zombie Self-Defense Force and Stacy, Attack of the Schoolgirl Zombies. If you’ve ever wondered what kind of film Sam Raimi might have made after the Evil Dead trilogy if he’d been packed off to Japan, this is it. You’ll need a stomach for extreme slice-and-dice action combined with off-the-wall ideas, but this is entertainment like nothing else.