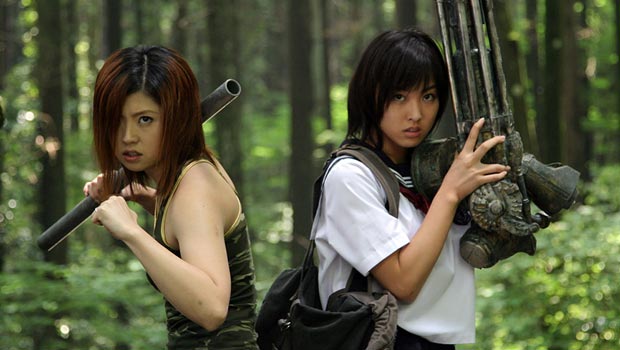 If Evil Dead’s Ash had a young female Japanese cousin, she would probably be The Machine Girl. Sporting a machine gun for an arm and hell-bent on revenge for the murder of her brother, Ami (Yashiro) takes no prisoners as she blasts her enemies to pieces with hyper violent glee. The only difference is she takes on real baddies as opposed to Ash’s undead foes.

Marking the birth of a new label releasing the most intense movie experiences from Eastern Cinema, The Machine Girl (Kataude mashin gâru) is typical of the extreme Asian offerings that have very few boundaries in their attempts to shock and confound the senses. Innocent-looking schoolgirl Ami is introduced to us in a gore-splattering opening sequence in which she either lops off the limbs of her enemies leading to stumps spurting red blood everywhere or literally shoots them until they disintegrate before our eyes using a machine gun fused onto her missing lower left arm. Yes, this is grindhouse cinema Asian style, closely aligned to the female character in Rodriguez’s Planet Terror who has a gun for a leg. Writer/director Noboru Iguchi gleefully unashamedly films every grizzly death close up and with a lingering intent daring the faint-hearted to look away. If you don’t like exploitation cinema, The Machine Girl will have you reaching for a sick bag pretty quickly.

From the action-packed opening, The Machine Girl slows pace slightly to six back six months to when Ami had two arms and a younger brother Yu (Ryosuke Kawamura). Sadly for Ami, Yu has a tendency to get himself into trouble with best mate and they wind up both getting killed by a ninja clan. Seeking revenge, Ami is initially captured and loses an arm trying to hunt down those responsible, but mounts an all-out return assault after a little training and an arm replacement.

Graphic bloody dismemberment, decapitation, necrophilia, yakuza ninjas, chainsaw killings, a flying guillotine and a flesh-ripping drill bra are all part and parcel of The Machine Girl’s visceral experience high on over-the-top action, low on carefully orchestrated plot points, and why not? Films like these are comic gold when viewed by the right audience, and those uninterested in what they might consider “nonsense” have probably stopped reading or caring by now anyway. Iguchi is inventive in his killing sprees: one man’s hard is so riddle with bullets his head is reduced to bone as the skin and flesh is torn off it while another man is sliced in two vertically. If they sound like a hilarious treats to marvel at, The Machine Girl will have you gunning for a Japanese schoolgirl with a large weapon at her disposal to obliterate the enemies she faces and paint the screen red. It’s not clever, it even features former Japanese porn star Asami as Ami’s best friend, but it is big on crowd-pleasing, gore-filled action.

EXTRAS
Trailer, behind the scenes feature.