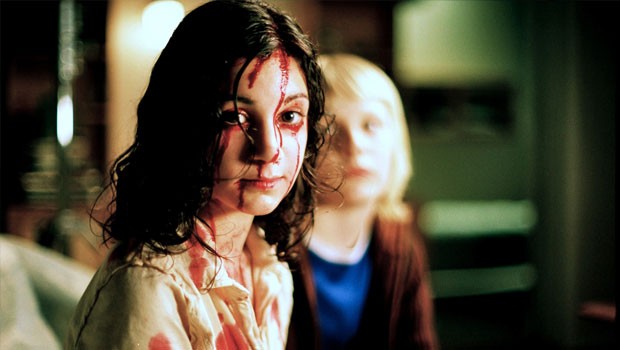 Let The Right One In Review

Let The Right One In (Låt den rätte komma in) comes trailing plaudits; a firm festival favourite, it was in many critics’ top tens last year. This worries me; could it possibly live up to the hype?

Well, the answer is a resounding yes. The film, based on the best-selling novel by John Ajvide Lindqvist, is beautifully shot, lit and framed, featuring completely believable performances from its two young leads; its also an incredibly original take on vampire mythology, and, at its heart, despite the violence and horror, is a tender romance and coming of age story.

12-year-old Oskar (Hedebrant) is a lonely latch-key kid with a terrible Plantaganet hairstyle living in a gloomy suburb in early eighties Stockholm. Oscar is bullied, casually and constantly, at school – his teachers and divorced parents seem entirely oblivious – and he spends much of his time reading about murder and fantasising about revenge. One day some new people move into the flat next door. They arrive at night, all their possessions in one cab, and immediately tape cardboard over the windows. The man, Hakan (Ragnar) goes out, carrying a case full of strange equipment, accosts a stranger, drugs him, strings him up and slits his throat, draining his blood into a jerry can; in the middle of the process, though, he is interrupted by a large poodle and its owner, out for a walk.

Over the next few weeks, a number of people mysteriously disappear, and Oskar makes friends with the mysterious girl next door. Eli (Leandersson) doesn’t seem to feel the cold, only comes out at night, doesn’t go to school. But Oskar is so happy to have a friend that he doesn’t care. Eli cares about him, and Oskar blooms – he learns Morse code so they can speak to each other through the thin adjoining walls of their flats, lends her his Rubik’s Cube, and takes her advice to stand up to the bullies at school. Hakan is jealous of their growing intimacy; as he ages he is no longer able to kill with swift efficiency, and is caught by the police. In the meantime, Eli has been seen killing, and the friends of the drunk she murdered are determined to hunt her down.

It is completely true to say that I have never seen a film like Let The Right One In. Its like Buffy The Vampire Slayer crossed with a Mike Leigh [more Ken Loach, I’d say] film. The dull mundanity of Oskar’s life, his acceptance of his depressingly narrow world – this is the true horror; ironically he loves Eli because she treats him like a human. She in turn only does what she must, determinedly resisting the urge to bite down on Oskar, even when he, in a misguided romantic gesture, cuts his hand for them to mix their blood. Unlike the toothless, twee Twilight, Let The Right One In does not present vampires as creatures of preternatural beauty. Eli is often unwashed, with greasy hair; she’s also an extremely messy eater. Its actually Oskar, despite his silly hairdo, who looks like a blond cherub.

The title refers to the belief that a vampire must be invited in order to enter a home, but also to the fact that Eli and Oskar let each other into their hearts and lives. They are the right ones for each other. The film sticks to Bram Stoker’s established vampire lore for the most part – they don’t like sunlight (no sparkly nonsense here!), don’t eat human food, etc with only one new idea. Cats absolutely hate vampires; this antipathy is used to very amusing effect in one scene.

Holes can be picked – why doesn’t Eli feed on junkies and the homeless, people who won’t be missed? why does she live such a grim life when she could pretty much live however she wants? why doesn’t she turn Oskar? – but this is an immensely effective and oddly beautiful horror film and a sweet, touching romance. With decapitations. One to watch.