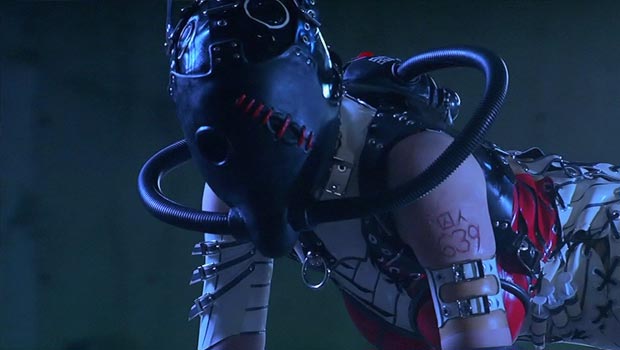 Mutants with chainsaws for arms and crocodile-like jaws for legs go head-to-head with a police force intent on wiping them out in Tokyo Gore Police, a splatter-fest which combines the body horror of David Cronenberg with OTT Japanese styling. Set in a future Tokyo where the city’s privatised police force is battling a wave of bio-mechanical mutants called Engineers, this is an unashamedly outrageous dice ‘em up in which body parts go flying in all directions and heads get sliced in half. If this were an arcade game, it would be every teenager’s favourite beat ‘em up with an endless supply of enemies with the craziest modified weapons growing out of them.

Coming from the producers of The Machine Girl and directed by Yoshihiro Nishimura who handled the special makeup and effects on the movie, it’s no surprise Tokyo Gore Police is another revenge mission which entertains by revelling in its absurd nature and cranking up the on-screen mayhem up to 10.

The reason behind this mutant verses police war is the result of an insane experiment by a crazed scientist named the Key Man. He has created a bizarre key-shaped tumour which can be implanted which turns ordinary people into Engineers. These Engineers have the unique and unsettling ability to grow weapons out of any wound inflicted upon them and are all-but invincible unless the tumour is destroyed or removed from their bodies. So while these Engineers bleed from gunshot wounds or a lost limb, they soon grow something more effective for taking down their adversary. One man grows a chainsaw for an arm, another is dismembered and is next seen with a giant cannon stemming from his groin. Frequently delighted with their new toys and gleefully ready to attack whoever stands in their way this is visceral entertainment but not for the faint-hearted.

Leading the fight against these creatures is Ruka (Shiina), a young, sexy, self-harming cop armed with a katana and a whole lot of attitude – much like The Machine Girl of Nishimura’s last movie. Ruka’s on a bloody mission to eradicate the Engineers and reveal who the Key Man responsible for unleashing the Engineers on the unsuspecting public and provides the chief adversary in a deadly ninja fashion.

Comic book gore and a plot exploited to provide maximum fighting time, Tokyo Gore Police succeeds in its bid to push the few boundaries it sets for itself to the limit. Namely trying to think of the most ghastly mix of organic and mechanic bodies, then have them destroyed with a bucket load of blood after they’ve killed a dozen expendable police officers. One for splatter-fest fans, it hits the spot magnificently if you can handle the onslaught. Think The Evil Dead on a rampage through Tokyo and you’re getting close.