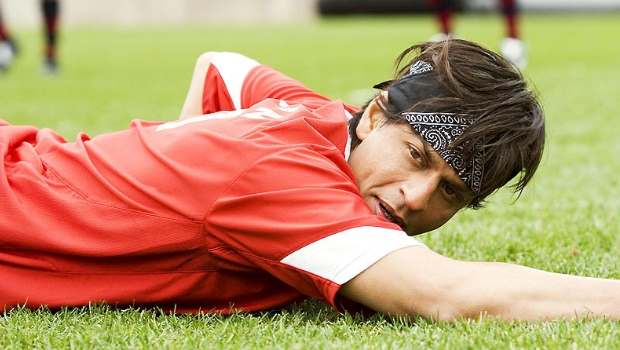 Summary: The music is good, the film is not.

I don’t usually choose my words carefully, but here I really seem to be treading with prudence about a sensitive subject. Infidelity. This in regard to the much awaited, highly anticipated Kabhi Alvida Naa Kehna (translates to Never Say Goodbye) from Karan Johar.

A tale of designer infidelity as only Johar knows how, but he doesn’t quite pull it off… Kabhi Alvida tells the story of two married couples. On the one hand prematurely retired footballer Dev (Khan) and driven career woman Rhea (Zinta). Dev is majorly miffed with life, at his own misfortune [sports injury..] and failings, which makes him a very bitter person… indeed he continually takes out his bad tempered tantrums on his wife and fraught son. Completing this quadrangle we have soul-searching teacher Maya (Mukherji) and her savvy metro-sexual hubby Rishi (Abhishek). Event organiser Rishi is the idyllic husband; handsome, loving, sensitive and still incredibly hip. Still Maya is missing something, or rather she feels her marriage is. This is when the friendship between two lost souls Maya and Dev becomes something more, and their insecurities and longing produces an affair.

No doubts one can say south-Asian cinema has moved forward leaps and bounds with this type of subject being dealt with – if only it was done properly. It’s not your all singing, all dancing Bollywood numbers… well actually it is, but with some much needed grit and reality. So it’s the same glossy packaging with thankfully different content. But then it all comes crashing down – it simply isn’t realistic. Not the premise itself; affairs are a part of life with their own trials, tribulations, passions… and are happening around us intermittently… It’s the way it’s been handled that simply doesn’t pass muster.

Johar is putting across the case for infidelity unabashedly. Having himself proclaimed he doesn’t believe in the institution of marriage, and that he never will go through with one (civil ceremonies are still far from legal in India..) he really is trying to break the mould, and break it down. Trying to put across the case that ‘What happens if you find your soulmate after you’re already married?’ in this case – can there be a happy ending? At least the characters here aren’t holier than thou saints dripping with ‘goodness’ – our protagonists have issues, insecurities, they’re oh so flawed & thank God kinda normal.

But it’s difficult to take in as our lead protagonists are far from defined. Their motivations for taking such steps are never very clear. Khan as Dev trudges around pissed as Riley for the whole movie; perennially miffed with life and those around him. How he could fall in love in such a morose state, or more intriguingly – What did Maya see in him to start having an affair? It may be their respective failings that brought them together; his failure in his career and her inability to bear children. In some respects, and from a certain perspective the most significant role for both sexes… Is this enough to justify sleeping with the next chap’s wife? The lead track resonates “Love will find a way” Hmmm, okay…

This is difficult to fathom as Dev’s wife – although a career woman is considerate of his feelings despite his constantly making an issue out of any minor thing. His insecurity and rampant loathing of life constantly feeds this friction between them. Maya on the other hand plays a lost soul. She doesn’t seem to know what she wants, what love is, and whether what she’s feeling is right. Maybe marrying a friend was a compromise, but is there any more to love than this? Longing for a certain passion, for something she doesn’t quite know, for Dev? Both respective spouses Rhea and Rishi try time and again to keep their partners happy and the marriage going, by listening, compromising, and the rest. But it seems the couple embarking on the affair just don’t want to listen.

The performances range from irritating to steely. But Abhishek as Rishi especially gives a restrained performance, and is probably one of the better defined characters. So much so that you can’t quite fathom why she’d leave him. Johar should be given kudos for try something different, but it’s so off the beaten track he seems to have gotten lost. Especially when it comes to the colour-coordinated dance sequences and the utterly redundant ‘black beast’ comedy thread. The music is good, the film is not.

As we speak the film has broken all Box Office records for a Bollywood film globally EVER, including the UK where it has taken more moolah than contemporary releases Lady in the Water, A Scanner Darkly and Harsh Times combined. No mean feat, but more than justification of a good movie – a huge testament to branding (Johar) and star-power. Verdict: Avoid.