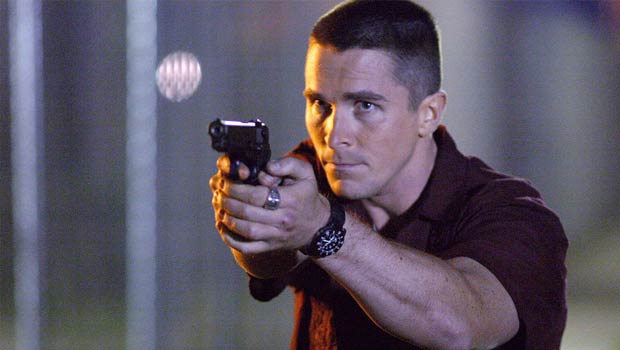 Summary: Done on a budget and this occasionally shows in some out of focus shots but the strength of performances and script pulls you through.

It was a nice sunny evening when I went to see Harsh Times, and I was a bit disgruntled that there wasn’t so much as a glass of juice on offer, just straight on into the screening. So, was it worth it? Read on to find out…

Harsh Times, though it sounds like a Dickens’ novel, is in fact first time director David Ayer’s follow up to Training Day. It’s the gritty story of Jim (Bale), a Gulf War vet, and his best friend Mike (Rodriguez). Since coming back from the Gulf, Jim hasn’t been able to get his life back on track. Scarred by his experiences, he suffers from recurring nightmares; he has spent all his money waiting for a job offer from the LAPD. He is only happy when he’s down in Mexico with his devoted girlfriend Marta (Trull), and his future happiness hangs on this elusive job – it’s the only way he can bring her into the US.

In the meantime he hangs out with Mike, also unemployed, killing time getting high and drinking beer to the annoyance of Sylvia, Mike’s girlfriend. Sylvia, a laywer, is tired of supporting Mike, and nags at him to look for work. Jim promises to help, turning up in a suit, but instead throws Mike’s resumes into the street and drags Mike through South Central, causing trouble wherever they can. But as the job with the LAPD slips out of reach and Jim gets a call from the Department of Homeland Security, Jim and Mike’s adventures feel less and less lighthearted. Jim can’t shake off echoes of combat; violence stalks him.

Christian Bale always brings a certain darkness to his roles and Harsh Times is no exception. Jim has a certain wildness in his eye, like a horse that has been beaten and now trusts no-one. Instead of applying for jobs he should be seeing a counsellor, but its obvious that despite his exemplary military career the Army has no more use for him; far from helping him heal, the Government wants to turn him into an assassin, You can’t really imagine Jim getting in touch with his inner child, anyway, he and Mike are proper working class stiffs – aspirational, but still old-fashioned men. Which in this case seems to be synonymous with idiots – Jim and Mike seem to have turned into adolescents, giggling and drunk and driving poor Eva Longoria’s Sylvia insane.

Speaking of whom, I felt sorry for the pocket-sized Desperate one. Sylvia is very one-dimensional; seen from Mike and Jim’s perspective she’s just the person who wants to spoil their fun, a cross between nagging wife and bossy mum. There’s a nicely genuine chemistry between Freddy and Christian, who feel like old friends; Mike in fact a better friend than Jim, who seems like he was always a bit of a tosser, really deserves.

I like films that show the dark underbelly, and Harsh Times shows the other side of the Hollywood dream – poor Angelenos, poor Mexicans. It was done on a budget and this occasionally shows in some out of focus shots but the strength of performances and script pulls you through. In many ways it’s a good companion piece for Little Fish – working class people struggling against their circumstances – but Harsh Times is much darker. No beach scenes here.