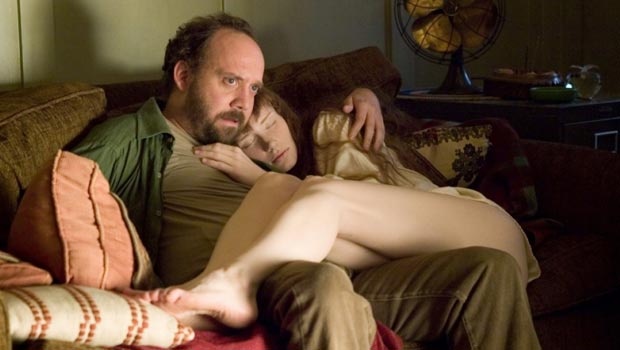 Lady In The Water Review

The improbably named Cleveland Heep (Giamatti), a widowed doctor, has, since the murder of his family, been working rather mundanely as a building super in a generic Philadelphia apartment block. One evening, he finds a naked young woman (Howard) in the block’s tear-shaped swimming pool. She tells him that her name is Story, and that she is a Narf from The Blue World. Piecing together bits of information from various residents, and from Story herself, Heep works out that the Narfs are an aquatic people; once close to humans, the two kinds became estranged when humans stopped listening to the Narfs’ advice. Nonetheless, the Narfs occasionally send out messengers to interact with and inspire ‘vessels’, human beings of particular importance.

As it turns out, Story needs to spend time with a vessel in Heep’s building, she just doesn’t know his name. And she doesn’t have much time; she only has a few days before the Great Eaglon must come and take her home. And that’s only if she can get past the scrunt, a hyena-like animal made of twigs, with a taste for Narf flesh…

If this all sounds a bit daft, believe me, it is. M. Night Shyamalan burst onto the scene trailing clouds of glory with The Sixth Sense, but ever since it has been a case of diminishing returns. If you love him you may well love Lady In The Water, but most people will be left scratching their heads and wondering what happened to a clearly gifted writer/director. Without going into the whole ‘misunderstood genius, Disney just don’t get me’ saga, there are many many things to irritate about this film: by casting himself as the brilliant writer whose words will usher in a revolutionary era of peace and justice, but at a price, ‘Night’ seems to be suggesting that he is a Christ figure for the 21st Century – talk about hubris…

Then there’s the corny, portentous dialogue; the endless rounds of explanation and exposition – my especial favourite being a kind of dumbshow between Story, naked in the shower, and Anna (Choudhury), while the men preserve her modesty from the bathroom door; the ‘wacky’ residents of the apartment, ethnically diverse and boringly stereotypical. The fine cast do their very best but are criminally wasted – Jeffrey Wright gets to solve crossword puzzles, Freddy Rodriguez pumps iron, Bob Balaban, as the evil film critic, is prissy, grumpy and dead by turns.

But my biggest beef with the film is this: it aspires to be about the power of myth, the importance of storytelling, Joseph Campbell style, but presents us with a myth so weakly realised, so ill-thought out, that it sounds as if the actors are making it up as they go along. M. Night Shyamalan apparently based the screenplay on a bedtime story that he made up to put his children to sleep. Drowsy kids maybe aren’t that interested in internal consistency, but movie-going audiences have come to expect it. That he admires Christopher Paolini’s derivative, juvenile epic fantasy Eragon explains a lot. There’s no magic here, but we have to – we are TOLD to – take it on faith. Sorry, I need a bit more than a pallid Bryce Dallas Howard, even borrowing Daryl Hannah’s wig from Splash, to make me believe in angels.

This Lady is a disappointingly soggy mess.

Alternative review:
“A crying shame that such a talented bunch of people couldn’t have come together to work on a different project….” Lady In The Water review by Bruce Munro