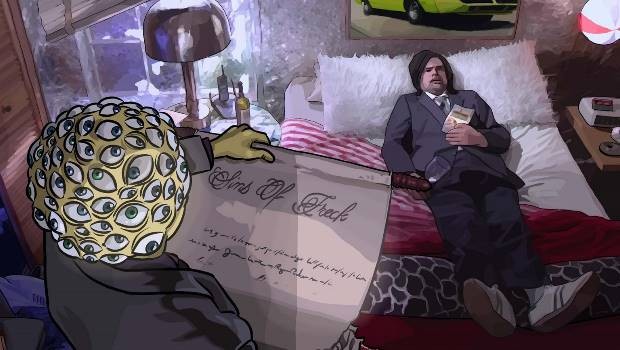 Summary: It’s far from a bad film, and there are some strong performances among the cast.

Surely the only way to breathe any life into a performance by Keanu Reeves, a man who would be beaten to an Oscar by a shed, is to literally animate him. Richard Linklater has done exactly that in his new film, A Scanner Darkly, an adaptation of the Philip K Dick book of the same name. Using the same methods as in his 2001 project Waking Life, he has recorded the actors digitally before getting artists to draw over them using a technique called rotoscoping.

Reeves stars as Bob Arctor, who’s an undercover police officer known by the codename Fred. He lives with two Substance D addicts, Barris (Robert Downey Junior) and Luckman (Woody Harleson) in California of the near future and is meant to exploit his relationship with them and his girlfriend Donna (Winona Ryder) to get close to drug dealers further up the supply chain.

He reports to an officer called Hank, but as undercover officers are required to remain completely anonymous to even each other “scramble suits” are worn during their meetings. These mask the wearer’s identity by displaying a selection of other people’s faces and clothes and remodulating their voice. This conveniently allows the animators to show off their skills, and presumably serves to make a comment on identity, a favourite theme of Philip K Dick.

Reeves’ character has himself become addicted to Substance D during his investigation, which causes his mind to become severely unbalanced. The left and right hemispheres of the brain compete for dominance, as do the identities and desires of Arctor and Fred.

He eventually becomes so unstable that he sent to a rehabilitation facility by Hank, who it transpires is actually Donna. We find out that she deliberately pushed him into becoming a drug addict in order to investigate the New Path corporation. This seemingly good corporate citizen is actually responsible for growing the flower that is the organic ingredient in Substance D, but they are so powerful that the government isn’t allowed to scan or search their property. Only a man completely broken by addiction can infiltrate their organisation to gather evidence of what they are doing.

While CCTV type technology can be used to track people at will, the world created in A Scanner Darkly isn’t quite the Orwellian nightmare some suggest it to be, and this is probably my main criticism of film. For my money, Linklater pulls his punches; he could taken the audience to a much darker and more vivid place, as Frank Miller did last year with Sin City. I presume that this restraint is motivated by a desire for the film to act as a comment on the society in which we now live, particularly the US government’s war on drugs and increased draconianism that comes with the war on terror.

But it’s far from a bad film, and there are some strong performances among the cast. While playing to type, Robert Downey Junior pulls off the role of a smart arse speed freak with ease, as does Harrleson as an aging stoner. Together, with Rory Cochrane, who plays Freck, they do a great job of bringing light relief to the film. I hope this bunch can be reunited on a future project with Linklater, perhaps forgetting to invite Keanu Reeves and Winona Ryder along for the ride.