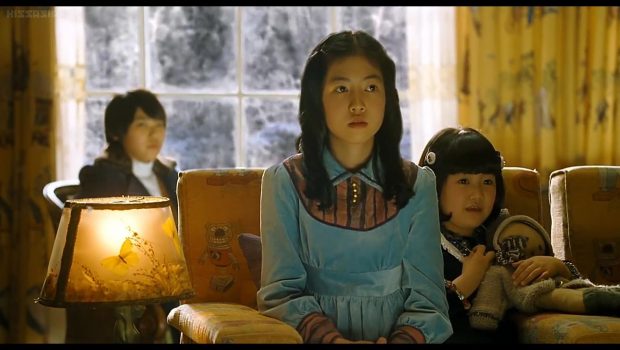 Summary: Hansel & Gretel is a treat thanks to its sweet outside concealing a dark centre.

The Brothers Grimm fairy tale of two children who become prisoners of a witch in a gingerbread house gets a dark and twisted reinvention in Hansel & Gretel, a South Korean fantasy comparable to Pan’s Labyrinth, The Orphanage and Tideland. Childhood dreams, the loss of innocence and the power of imagination are employed for a similarly impressive visual feast draped over a story of a family living in a forest with a nasty sting in its tail.

Father-to-be Eun-soo (Jeong-myoung) is driving to visit his mother while talking to his expectant girlfriend on his mobile phone when he loses control of his car and crashes. When he regains consciousness, he is confronted with a child who takes him to her isolated home deep in the forest where she lives with her parents, brother Man-bok (Won-jae) and sister Jung-soon (Ji-hee). Initially he takes up the offer of a place to stay, however when Eun-soo can’t find his way out of the forest he finds himself unexpectedly looking after the children while their parents go away on urgent business. Suddenly he sees a different version of family life as he endures torturous scenes which confuse and suggest a demonic enchantment has been placed upon a the forest. Not quite the fairy tale we all know, yet the idea of a strange house in the forest remains the key to this story too.

Starting out on an off-beat track, Eun-soo meets the family in its home of bright colours, toys and confectionary where all seems twee and coy as they celebrate Christmas. But when he finds no way of contacting civilisation and subsequently becomes lost in the forest whenever he tries to find his wrecked car, it goes into scarier territory before expunging its horror side as the children reveal their worst traits to him.

The move from a wonderland story into Asian horror fare so smoothly that you’ll find yourself captivated by the sumptuous, pastel shades of production designer Ruy Seong-hee (Oldboy) before being shocked into realising you’re watching a far-from-innocent child’s bedtime tale. Nightmarish scenes involving telekinesis as the children become more and more wayward coupled with enough bang-and-crash sounds to have you jumping off your chair with regularity help wrack up the tension, while the appearance of an evil priest and Santa himself shake up the narrative.

The parallels with Pan’s Labyrinth and The Orphanage are not just the fantastical elements melded with reality, but also in the storytelling. Sure enough, it all becomes clear in the final act what has really been happening as writer/director Yim Phil-Sung is keen to let us in on the secrets he’s been keeping from us. It’s an interesting reveal providing much-needed clarity to the mystery that comes before. Combined with such sumptuous looks, Hansel & Gretel is a treat thanks to its sweet outside concealing a dark centre.