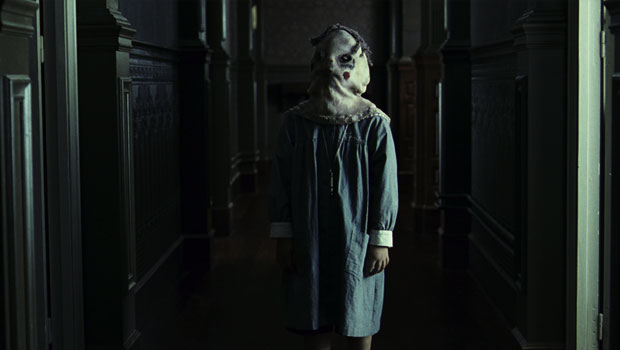 Summary: It’s no Pan’s Labyrinth, but is part of a new wave of Spanish horror/thrillers in the tradition of The Others.

I don’t approve of these ‘so and so’ presents credits. I think they’re misleading, and can do the actual director a disservice. Tarantino may have started it, but it’s becoming common practise. In the case of The Orphanage, Guillermo Del Toro’s extra credit is not needed; he is an executive producer on the film, so I suppose it’s a marketing wheeze, like those stickers on books that say if you like Stephen King you might like Neil Gaiman. But I still don’t approve.

The Orphanage is the story of Laura (Rueda), raised in an orphanage by the sea, to which she returns years later with her husband, Carlos (Cayo), a doctor, and adopted son Simon (Princeps), planning to turn it into a home for handicapped children. From the moment they arrive Simon starts behaving oddly. He claims to have a new friend, Tomas, and begins to play creepy and elaborate games. Laura is even more unnerved when a social worker turns up, questioning her about Simon’s health – Simon is HIV positive, but is ignorant of the fact. Laura investigates – there is no such social worker. And then she finds her, hiding in the shed…

On the day that the home is due to reopen, Simon disappears, and Laura is attacked by a strange child, whose face is covered with a sack. As Laura tries to find Simon, she uncovers the secrets of the orphanage…

This much I know. Orphans are evil. And bathrooms are dangerous places in orphanages. But watching horror films in other languages is a good thing for me, because I am a big fat scaredy cat, and reading the subtitles distracts me from whatever is going on on screen. The Orphanage isn’t too bad though, it’s more a supernatural thriller than a true horror film, though with some nice jumpy moments and some real tension. It opens with some beautifully designed titles; children’s hands reach into frame and rip away old flock wallpaper. The early part of the film is also surprisingly sunny and full of light, though it rapidly gets darker.

The lead actress, Belen Rueda, a star of Spanish television, is excellent as Laura. She is beautifully and refreshingly natural and much more attractive for it. She also communicates Laura’s desperation and increasingly tenuous grip on reality beautifully, and her relationship with young Roger Princep, who gives a subtle performance as the increasingly angry and morbid Simon. Less effective is the slightly bizarre inclusion of Geraldine Chaplin as Aurora, a medium who conducts an elaborate séance but fails to give Laura any genuinely helpful advice, At that point it gets a bit poltergeisty and fails to convince, but generally it’s a tautly unnerving and accomplished piece of work.

Some might find the subject matter of the missing child upsetting, and I couldn’t help thinking of the McCann case when the camera pans across a wall of newspaper cuttings and rumoured sightings. It’s no Pan’s Labyrinth, but is part of a new wave of Spanish horror/thrillers in the tradition of The Others.