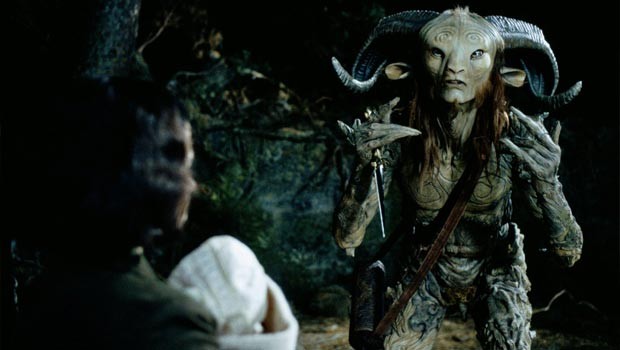 Summary: There’s very little that’s pretty about it, it’s a dark and violent film, but has a wild beauty and a complexity that is rare, and lingers with you long after you leave the cinema.

Viva Mexico! I’m sure there are plenty of really bad films made in Mexico but the directors and actors making their names on the international stage – Alfonso Cuaron, Alejandro Gonzalez Inarritu, Gael Garcia Bernal, Diego Luna, and Guillermo del Toro – are producing the most fantastic body of work. If there is any justice, at the 2007 Academy Awards the cry will be ‘The Mexicans Are Coming’, as Babel, Children of Men and Pan’s Labyrinth are all contenders for film of the year.

Recently remarried, heavily pregnant Carmen (Gil) moves with her bookish, imaginative daughter Ofelia (Banquero) into the house of her new husband, the cold-heartedly authoritarian Vidal (Lopez), a captain in Franco’s army. Ofelia is led by a fairy that she meets in the wood into a mysterious labyrinth, where she meets Pan, the guardian, a satyr who reveals to her that she is none other than the long-lost princess of a magical kingdom. To regain her lost throne, she has to accomplish three dangerous tasks…

The Civil War is coming to an end, and Vidal’s orders are to flush the last remaining rebels out of the hills where they have sought refuge. He is suspicious that someone in his household is helping them, but cannot bring himself to believe that his housekeeper Mercedes (Verdu) could be the traitor. He is obsessed with his wife’s pregnancy, determined that the baby will be a son, and when the pregnancy proves a hard one orders her to bed. Ofelia, terrified that her mother will die, leaving her to Vidal’s devices, uses a charm to protect her, bringing the magic of the labyrinth into the real world.

One of Pan’s Labyrinth’s most interesting and successful departures from the conventions of fantasy is this mixture of fantastic and real; both are given equal weight, but the real monster in the film is Captain Vidal, because he has chosen to make himself this way. His soul has been consumed by fascism, so that he can coldly stab a man in the face with a broken bottle and still sleep at night. By contrast, the monsters that lurk in the Labyrinth will not hurt you if you obey the rules, though they are still genuinely scary.

The production design is stunning. The fantastical creatures are like nothing you’ve seen before. Pan, unlike Mr Tumnus, is a natural creature, his legs covered in foliage. He’s not a tame faun; he’s sinister, potentially cruel. The fairies are grubby stick insects, grimy and deceitful; the giant toad lives in a disgustingly organic muddy tunnel under a giant tree; it spits gouts of mucus at poor Ofelia. Perhaps the most terrifying creation is the Pale Man, a featureless creature with eyes in stigmata on the palms of his hands.

Ofelia’s fantastical quest is rooted in a context of war, with mythological elements grafted on. Though the central protagonist is a little girl, this is very much a fairytale for adults. There’s very little that’s pretty about it, it’s a dark and violent film, but has a wild beauty and a complexity that is rare, and lingers with you long after you leave the cinema. If you are prejudiced against fantasy, put those prejudices aside. If you see one film this year, make it this one.