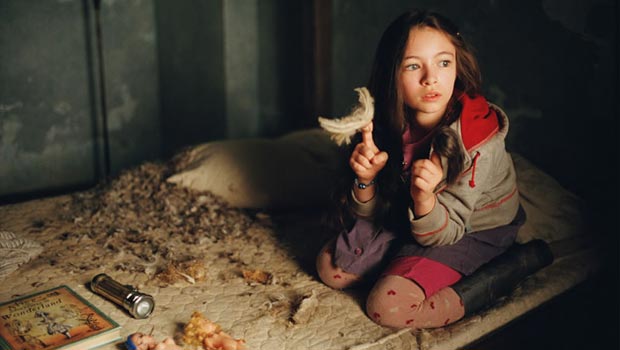 Summary: Gilliam, it seems to me, is creating cinematic fairytales. Long may he continue.

Ten year old Jeliza-Rose’s (Ferland) parents are junkies. When her mother (Tilly) dies, her father Noah (Bridges) decides to take her back to his childhood home. Her grandmother is long since dead, but Noah and Jeliza-Rose quickly settle into the isolated, ramshackle farmhouse, where Noah goes on a little – and permanent – vacation. Jeliza-Rose escapes the loneliness of her new existence by living in her imagination, a place where squirrels talk and she has for company the heads of four dolls. And then one day she meets Dickens (Fletcher), a young man with the mind of a ten-year old, and his sister Dell (McTeer), an uncanny figure in a rusty black beekeeper’s outfit.

I really like Terry Gilliam and think that his films, however flawed, are always original and interesting and have their own visual style and language. Tideland is an exemplar of his strengths and weaknesses, so, to sum up, Heat-style:

The good: Jodelle Ferland is wonderful. Because Jeliza-Rose’s parents are pretty neglectful and selfish, she often acts like the parent, preparing their fixes. She is used to her mother’s wild mood swings, and when her mother dies seems to adapt pretty rapidly. She is unfazed by their journey and doesn’t question it when her father doesn’t wake up. She is in every scene and is absolutely the heart of the film. The film also bears all Gilliam’s trademark visual flair and invention, coupled with the barking mad, Gothic Nightmare elements of the novel. Jeliza-Rose running across the prairie in feather boa and straw hat; Dickens shark-hunting; Dell skinning Noah… The images almost tumble over each other in their haste to get out of Gilliam’s mind and onto the screen.

The not-so-good: it’s visually lovely but there’s really not much of a story – Jeliza-Rose’s journey doesn’t take her very far, and both Dickens and Dell being retarded (Dickens mentally, Dell emotionally) nothing happens. It’s more like a snapshot of an interlude than a ‘proper’ story with a beginning, middle and an end. The pacing is quite uneven and sort of baggy. Some may find the relationship between Dickens and Jeliza-Rose disturbing; it has definite romantic overtones which are for them entirely innocent, though there are hints that Jeliza-Rose’s grandmother took advantage of Dicken’s simplicity before she died. It also seems slightly unbelievable, having seen her mother die, that Jeliza-Rose isn’t more anxious when Noah doesn’t move or get up.

With Gilliam, I guess, you either like him or you don’t – if you do you’ll be inclined to forgive him, because his failures are almost always more interesting than other people’s successes. Tideland won’t be for everyone, too whimsical and flimsy, but if you get it, you’ll get it. I also really like that Jeliza-Rose is presented as tough and resilient and self-sufficient. Kids are much more adaptable than society would like us to believe, and they can cope with being scared – that’s the point of fairy tales – to frighten and then reassure. Gilliam, it seems to me, is creating cinematic fairytales. Long may he continue.