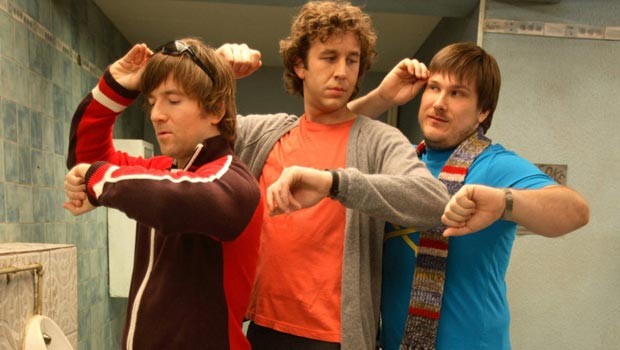 Summary: Humour and wit stretches a lot further than the disappointing movie adaptation of Douglas Adams' novel Hitchhikers Guide To The Galaxy ever did.

Three ordinary blokes walk into a pub: two geeks and a cynic. Stuck in dead-end jobs, these 30-somethings decide to let off steam over a few pints after work. Nothing unusual in that. Except when the first geek, Ray (Chris O’Dowd), goes to the bar to order a round of Guinness and some crisps he’s approached by Cassie (Anna Faris), a beautiful woman who claims to be from the future. Naturally he suspects it’s a prank and asks his friends if they put her up to it. The second geek, Toby (Marc Wootton), laughs when Ray explains his absurd encounter and, being a film buff, says it would make a great movie pitch and starts scribbling down ideas. Meanwhile, the cynic, Pete (Dean Lennox Kelly), dismisses Ray’s encounter and rubbishes Toby’s idea to turn it into a film, until he visits the gents’ toilets and stumbles through a time-leak which leads him into the a very scary version of the future. This triggers a series of accidental trips back and fourth through time, via the gents, where the guys frantically unravel what the hell is going on and why.

It’s certainly an unusual beginning for a sci-fi, but then again the movie has been scripted by a stand-up comedian (Jamie Mathieson) and good comedies are never afraid of being unconventional. No flux capacitors’, spaceships’ or tardis’ were worn out during the making of this picture and it’s all the better for it. Instead, FAQ About Time Travel, feels like Shaun of the Dead, except the zombies invading The Winchester have been replaced by the perils of a time paradox, which the guys fear they’ll create if they bump into past versions of themselves as they slip in and out the future. Ok, this foe might sound more mind-boggling than an apocalyptic uprising of zombies, but the narrative manages to coherently fold the same sequence of events without confusing you.

You definitely won’t need to read Professor Stephen Hawkins’ A Brief History Of Time before you visit the cinema, although some degree of film geekdom wouldn’t go amiss. FAQ About Time Travel is littered with allusion to sci-fi movies and books in a similar vein to the oddball sitcom Spaced. A-grade movie aficionados will enjoy pointing out intricate references to ET, Close Encounters, Gremlins and Aliens, but you won’t be left scratching your head if you don’t spot these as they’re not essential to the plot – just a complimentary extra for the kind sci-fi fan that owns all the Red Dwarf boxsets.

FAQ About Time Travel is not exactly the next Back To The Future or Bill And Ted. It’s mundane setting and lack of recognizable talent (aside from House Bunny star Faris) doesn’t make it feel like it could provoke a cult following of the same proportions. Yet its humour and wit stretches a lot further than the disappointing movie adaptation of Douglas Adams’ novel Hitchhikers Guide To The Galaxy ever did. Even when in danger of self-destructing, its tight script, silly observations about sci-fi movies and pub nibbles and careful continuity cadges the laughs.