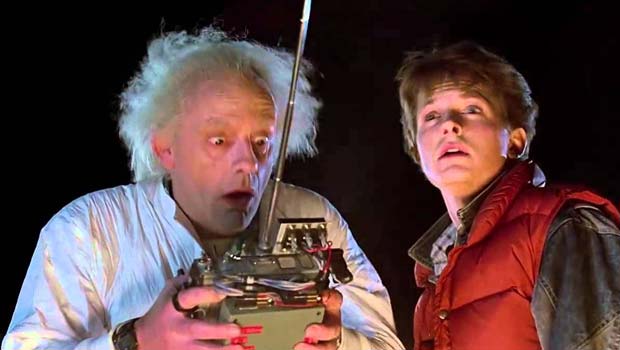 Back to the Future Trilogy Review

Summary: Fluffy and light but hugely likeable, even the slightly dull third film.

Now don’t tell me you never wanted to BE Michael J Fox when you were growing up!? If you are from my generation, nursed on eighties classics like “Teen Wolf” and “Back to the Future”, then you must have dreamed of surfing on top of a bus and sneakily clasping hold of car bumpers in an effort to skateboard your way to school in record time (giving you an extra five minutes in bed, before the bell).

Michael J Fox was THE teen icon of the 1980’s, and the “Back to the Future” trilogy where the seminal films of that period. A high concept idea poached from science fiction folklore, welded to the classic teen formula (hero, girl, meat-head villain, insane inventor? DeLorean sports car-cum-time machine??…) and steered into the box office stratosphere by the Steven Spielberg (producer) and Robert Zemeckis (director) double act, “Back to the Future” and its sequels were nailed on certainties to become popular classics, and will remain so long into the era of the Hover Board and the Pizza Re-Hydrator.

It is therefore only proper that a film so pre-occupied with the hi-tech visions of the future should get a full re-release and digital maker-over on DVD. Fellow ardent fans out there will have been longing for this for ages, and it has finally been delivered with around five hours of additional material sprinkled throughout.

The trilogy can be purchased individually or in a 3-disc box set, and each film contains specific extra features that run on into the next film. For example there is the obligatory backslapping session presented as a “making of…” documentary. In this case, one long insight divided into three chapters entitled “Making the Trilogy”. Despite being produced by the numbers and incredibly cheesy these kind of documentaries occasionally throw up one or two amusing anecdotes. For example Eric Stoltz (ginger star of “Mask” and that serpentine classic “Anaconda”) was originally cast as Marty McFly, but director Robert Zemeckis couldn’t really picture him in the role so he was replaced by up-and-coming television star Michael J Fox, who would rush from the set of 80’s TV show “Family Ties” to work on BTTFin his evenings, accruing about two hours sleep every night in the process.

The documentary aside, the outtakes are occasionally fun, especially an excellent one wherein Marty McFly becomes Tony Montana from “Scarface”, as Michael J Fox slicks back his hair and dons a string vest to create some terror around the set, what a joker?! The complementary deleted scenes, on the other hand, offer little to write home about. There are no much-sought-after legendary missing originals, instead we are simply given a collection of sequences that deserved their place as fodder on the cutting room floor.

The most enjoyable features are those that are a bit more interactive. The commentaries are enlightening (one from Robert Zemeckis, the other from writer Bob Gale) if you can stand two hours of voice-over lacing the entire narrative, and the “Did you know” feature has a novelty value worth exploiting. An icon pops up every so often throughout the feature announcing facts about the production. I am always a sucker for the pre-production archive material, and there is a good smattering dished out here, especially on the second disc, featuring concept drawings of many of the futuristic vehicles and sets constructed for the second movie and a Storyboard/Feature split-screen comparison of the hoverboard chase.

As for the films themselves, well I am sure you’ve all seen them… they are fluffy and light but hugely likeable, even the slightly dull third film oddly delivered in the form of a revisionist western??? The relationship between McFly and Doc Emmett Brown (Christopher Lloyd) is really what makes them shine, the rest is just window-dressing and bad make-up. Their on-screen rapour is even strong enough to dispel from your mind erroneous thoughts of just why an apparently well adjusted teenager with a nice girlfriend and plenty of guitar skills is hanging around with a bonkers old professor who is completely out of his tree! Nonetheless this strange relationship has enough momentum to carry through, along with some strong supporting performances (Crispin Glover in the first film as Marty’s dad, and the ubiquitous, barrel chested baddie Biff Tannen (Thomas Wilson) and family) that provide quirky contrast.

The Back to the Future DVD Boxset contains enough bonus material (with genuine effort afforded to some aspects of it) to keep things interesting. Those enamoured with the special features unique to DVD will be, on the whole, mighty satisfied. The films themselves possess enough slick charm to make this set a worthwhile purchase for the 1980’s enthusiast in everyone. Now make like a tree…and go buy it, buttheads.