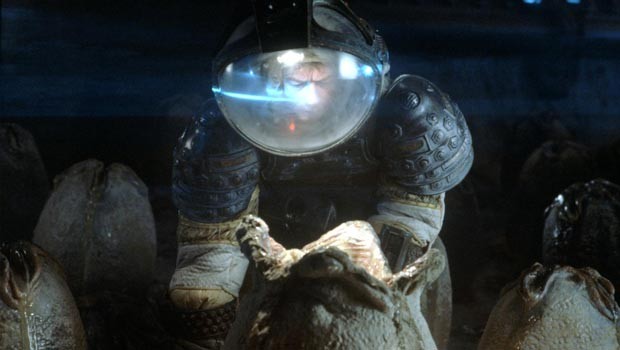 Summary: It should be pointed out that this ‘Director’s cut’ doesn’t really enhance the film, since most of the new footage reinserted are slight and were previously included on the DVD as extra deleted scenes, so anyone who owns the film on this format will have already seen them.

“You still don’t know what you’re dealing with do you? The perfect organism. It’s structural perfection is matched only by it’s hostility.” Ash

On it’s return to Earth, commercial towing vehicle Nostromo intercepts an SOS
signal from a remote planet and the beleaguered crew are under contractual obligation to investigate. Three crewmembers leave the ship to explore the area. At the source of the transmission they discover a derelict spaceship, laden with a cargo of alien eggs. When one of these eggs is disturbed, it’s deadly spawn infiltrates the cavernous maze of the Nostromo and the crew have to overcome a creature of devastating brutality by whatever means they can.

The end of October gives cinema goers a second chance to see this landmark film on the big screen, with a nationwide cinematic re-release, digitally re-mastered and with extra scenes reinserted as a ‘Director’s cut’. The question remains that now, nearly twenty-five years later, does it stand up to be counted as a timeless piece of classic cinema? Well, in a word, yes. In a couple more words, here’s why…

Although originally released on May 25th 1979, the groundwork for Alien was laid in 1975, when writer/producer Dan O’Bannon made the comedic Dark Star. Although completely different in tone, this earlier film disposed of the clean, efficient design that runs through most science fiction such as 2001 (1968), in favour of a grubby, used look and feel, suggesting that in the future, technology and human relations may not have moved on quite as much as we would have hoped. Also influenced by older black and white science fiction films, most notably It: The Terror From Beyond Space (1958), O’Bannon developed a script with the working title Star Beast, a script that sets the stage for suspense by presenting likeable, everyday characters being picked off by an unseen presence inside of a “haunted mansion”, in this case the Nostromo.

Star Beast was picked up by the production company Brandywine, set up by directors/producers David Giler and Walter Hill, who saw the potential of this ‘Jaws in space’ idea. After Hill passed on the directing duties, the script soon found it’s way to Ridley Scott, a relatively unknown British director who was staring to gain some reputation following his first feature, The Duellists (1977). Scott had himself confessed to only having seen a handful of sci-fi movies, but responded to the visual opportunities that presented themselves to him in O’Bannon’s script and he came aboard. With a diverse, talented cast and crew, Scott created a film that was a Box Office smash and created critical acclaim worldwide. One multimillion-dollar franchise later, the rest is history and although many people consider James Cameron’s 1986 sequel to be superior, there is something truly unique about Scott’s original nightmarish vision that cannot be ignored.

Although the film sparkles with quality on all levels, without a doubt the two main elements that make Alien unique within the genre are the palpable sense of terrifying realism combined with the truly unique environment that Scott committed to film, largely thanks to the contributions of designers Ron Cobb and surreal Swiss sculpture and painter H. R. Giger.

Firstly, the realism presented in this film is a triumph. Visually, Ron Cobb who had also worked on the cantina scene in Star Wars (1977) had proved to be adept at creating a very real, very broken vision of the near future with his work on Dark Star and was the immediate choice for visualising the Nostromo and it’s crew. The ship itself is a claustrophobic labyrinth of ducts, passageways and tunnels through which the members of the crew can barely pass. Cobb’s input and O’Bannon’s script instil within the core of the film the necessary intimacy required to create tension within a film of this genre. The crew of the Nostromo are no chisel-jawed, faceless astronaut heroes – they are intergalactic truckers, replete with baseball caps, faded denim and attitudes as bad as their Hawaiian shirts. Before the terror begins for real, we witness numerous squabbles over fair pay and bonuses for overtime as well as the perennial paranoid mistrust between fellow employees. These are real people with real problems; it is this device that makes us empathise with the crew and care about what happens to them throughout the film, a skill so often ignored in today’s movie making. Alien is comprised of highly distinguished and talented character actors from both sides of the Pond and indeed, their naturalistic, often improvisational approach gives the film extra credibility; the dialogue is overlapping and muffled, so much so that often it is inaudible, creating the notion in places that we are watching an unscripted documentary.

However, the star of the film truly is the beast itself. When it came to conjuring up the visuals for the alien in all its horrifying forms, Scott turned to the macabre, often sexual imagery of Giger, which appealed to the director’s artistic side. Scott was first introduced to H.R. Giger’s art work by O’Bannon while in the very early stages of pre-production for the film, in particular the Necronomicon book, and he immediately saw the potential Giger’s ‘biomechanical’ style had to offer the project. Despite initial studio concerns, Scott had made up his mind that in order to succeed, they had to create a monster that would be truly unique and superior to most of those from the past. Initially, Giger wanted to design the creature from scratch, but Scott was so impressed with his Necronom I and V paintings from Necronomicon that he insisted to Giger he follow their form. In particular, it was the contrasting elements of both horror and beauty that suited the essence of Scott’s vision for the film. Scott also insisted that Giger’s art was built in 3D by the man himself, as this was part of the overall effect. The result of this collaborative effort is now one of the most iconic movie monsters in film history.

The perverse, sexual element of Giger’s work not only adds to the inhuman terror of the alien itself but also seems to have permeated the entire film: the way the ‘facehugger’ implants the alien seed within the stomach of Kane (John Hurt) is effectively a form of male rape and how the seed emerges from within in the now legendary ‘chestburster’ scene is the worst kind of violent birth anyone could wish for. The adult creature itself, with it’s long, domed head, is highly phallic and it is also worth noting that the way in which the beast kills it’s prey is overtly sexual – by violently thrusting either its multi-fanged tongue or powerful tail into the victim’s body. During the scene where Lambert (Veronica Cartwright) is killed, the camera deliberately shows the alien standing before her, looking more man than beast, before following the creatures tail snake between her legs and up into her body. Interestingly, the subtext of rape and sexual violence is also present amongst the crew: the rape of Kane is mirrored later on in the scene where science officer Ash (Ian Holm) tries to suffocate Ripley (Sigourney Weaver) by rolling up a pornographic magazine and attempting to force it into her mouth. This theme is never as prevalent in the further three sequels as in the original, and they provoke an unsettling feeling of revulsion that lingers in the memory.

The re-mastering of the print and soundtrack ensure that it looks as beautiful as ever and also reveal how little the film as a whole has dated. It should be pointed out that this ‘Director’s cut’ doesn’t really enhance the film, since most of the new footage reinserted are slight and were previously included on the DVD as extra deleted scenes, so anyone who owns the film on this format will have already seen them. That said, they are interesting to watch, particularly Ripley’s chilling discovery of a cocooned Dallas and Brett (Tom Skerritt and Harry Dean Stanton, respectively). However, the inclusion of a few scenes here and there is not why you have to see this film on the big screen. This is the medium for which the film was made and how it was intended to be viewed; it is here that the combination of serene beauty (aided in no small amount by Jerry Goldsmith’s beautiful score) and the sheer otherworldly terror can be experienced in all its stifling glory. At the risk of sounding like an old man, they really don’t make ‘em like this anymore…