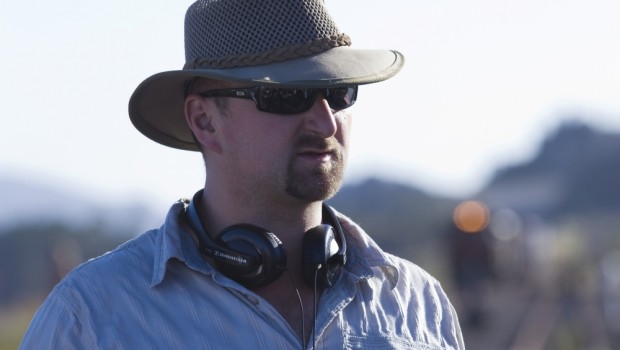 British director Neil Marshall, who won plaudits for the macabre Dog Soldiers and chilling The Descent, returns to cinemas with Doomsday.

Set in the future, a deadly virus has led to infected Scotland being quarantined from the rest of the UK and a presumption that everyone beyond the giant wall is dead.

But there are survivors and when the virus infects London, Major Eden Sinclair (Rhona Mitra) is dispatched north with a team of soldiers to find an antidote. Adrian Lester, Bob Hoskins, Alexander Siddig, Malcolm McDowell, David O’Hara and Craig Conway co-star.

Doomsday is predominantly set in Scotland. It’s rare to see a post-apocalyptic film outside of New York or London.

Exactly. It’s a chance to do something I’ve never seen before, at least not in a long, long time. There are films like Children of Men and 28 Weeks Later, but they aren’t fun like this is supposed to be. Doomsday isn’t meant to be taken seriously, it’s supposed to be two hours of outrageous entertainment and anarchy.

Hailing from Newcastle, did you consciously position your home city behind the wall?

I did, because I wanted to show my allegiance to the Scots. I knew I would get a number of accusations along the lines of ‘he hates Scots’. Well, I don’t. Technically, if you rebuilt Hadrian’s Wall it would include Newcastle and the whole of Northumberland as well.

Living in Glasgow, I found myself empathising with the cannibalistic savages. That’s strange isn’t it?

I’m hoping people won’t take offence in any way. I think it’s far less offensive to Scots than 28 Days Later is towards British soldiers, where the implication is that they would turn into rapists and murderers in 28 days. Whereas I’m implying that these guys could turn into cannibals in 28 years. Which isn’t such a big deal.

So the virus isn’t a comment on the infamous Scottish diet?

Oh God, no. Although it was my original intention that the virus would start in a Glasgow hospital.

Some US critics have derided the film for its references to films like Mad Max and Escape From New York. How do you feel about that?
Some have pointed it out as if I wasn’t aware of it. I wore it on my sleeve from the moment I went in and pitched it to the studio. This is a homage to those films and it’s what the studio wanted to see as well. Nobody else was making this kind of movie.

I wanted Eden Sinclair to have an eye patch but I wasn’t doing it as a copy of Snake Plissken’s in Escape From New York. I wanted there to be a reason for it, a history to the eye. How did it get injured and what happens with it? So the whole idea with the camera came into it, enabling me to have her wearing the patch some of the time, but not all. Then the camera became a huge plot detail.

The homage aspect has led critics to pan or hail the film.

It’s bizarre, because for me it’s a tribute to those films, a salute. Taking elements, twisting and turning them, making them my own, making them British. If this film had Quentin Tarantino’s name over the title, people would accept it much more easily – ‘oh, he’s doing his usual thing, paying homage to other films’. Also, Tarantino is referencing films that most people haven’t seen, whereas I’m paying homage to films that people have.

What’s the difference between this, and say, Hot Fuzz, which is a homage and a parody? Because it plays for broad comedy, somehow that’s perfectly acceptable. Whereas suddenly I’m a rip-off merchant.

And the film isn’t without its funny moments.

A lot of the humorous aspects were lost on a US audience, the kind of humour they just didn’t get. It’s far more suited to a British audience.

What it is about the Mad Max and Escape films you find so appealing?

Partly, it’s when they came about in my life. I was 12 or 13-years-old when I saw them for the first time, when my friends and I had just got video recorders in the house. We could watch any films we wanted and we chose those.

Partly, it was the era. We were living with the threat of nuclear war and being reminded of it constantly watching Threads or The Day After on TV. All sorts of post-apocalyptic movies and even things like the Wild Boys video by Duran Duran or Two Tribes by Frankie Goes to Hollywood. Everything was about the end of the world. So I wanted to capture that time period in the future.

What made you cast Rhona Mitra as your lead?

It was that toughness she has about her, a look of cold, hard death in her eye that means she’s believable. If she was too pretty, soft or feminine, it wouldn’t have been believable in any way and I wanted to avoid that. I wanted her to look as if she was physically and mentally capable of being as mean and nasty as she is. Obviously, she has a sex appeal about her but I don’t let it get in the way of the movie.

And Adrian Lester, in a far less thespy role than he’s known for?

He came to the audition and said look, I’m a certain age now and I’ve always dreamed of doing an action movie. This could be the only chance I get.

To bring his acting talent to an action film was phenomenal for us. And he just loved every minute of it. He’s a black belt in Tae Kwon Do and there was a scene where he got to show it off. We ended up cutting it but it’ll be on the DVD, him kicking some heads in.

You wrote the treatment several years ago, but there have been a series of post-apocalyptic films recently, such as Children of Men, I Am Legend and The Day After Tomorrow. Is doom in the air?

I felt gutted halfway through filming when I saw the I Am Legend trailer. Damn, somebody’s beaten us to it. But that’s the filmmaking process, you can’t plan too far ahead. There was nothing we could do about it. Even though there are similarities, we just knew our film was going to be very, very different to theirs.

What was really important to me was that my virus wasn’t some crazy thing that would turn people into zombies like every other virus movie out these days. It’s an unwritten cinematic law now that virus equals zombies. Resident Evil, 28 Weeks Later, I Am Legend and the Dawn of the Dead remakes, all zombie films basically. Whereas my virus is closest to the one in Outbreak. You get it, it rots you, you die. You’re not coming back from it.

You made your reputation as a horror director, but strictly speaking, this isn’t a horror film is it?

I never intended it to be a horror film but people like to pigeonhole you. ‘It’s a virus movie, Neil Marshall’s doing it, it must be a horror movie’. But it’s not. It has horrific elements in it, certainly, but I would never categorise it as a horror movie.

And you’ve tried to limit the amount of computer-generated imagery in the film.

CGI is a very useful tool but it can be overused. I Am Legend being a classic example of that. It’s used beautifully in the first half of the movie to depict empty New York, but horrendously in the second half to depict the creatures.

I like to do as much in camera and for real as possible. CGI is a last resort, for the things we definitely cannot do conventionally. It’s best used and should always be used to enhance reality rather than replace it, unless you’re creating something completely fantastical that doesn’t exist in reality. But if you’re depicting something real, like people, why would you use CGI? Just use people. They’re always going to be better.

So the stunts were elaborate to set up then?

Absolutely. I was determined we weren’t going to use wires, green screen, CGI or anything else. I wanted the stunt sequences to be real. I wanted real people doing crazy stunts in real cars at 90mph on a real road, putting their lives in danger. For stuntmen, that’s exactly what they want to do and it pays off because it’s the sort of filmmaking that doesn’t get seen much anymore.

And you only had one minor accident during the entire shoot?

Yeah, pretty much. Luckily, nobody got hurt. There were a couple of close calls. There’s a bit in the film where a motorbike hits a barrier, the guy flies through the air and it looks like he breaks his back. We thought he had broken his back. But he walked away from it fine.

Your previous films, The Descent and Dog Soldiers were well received by audiences and critics. Did you feel a greater pressure to deliver with a bigger budget?

I tried to ignore it. I was so overwhelmed, proud and chuffed with the response those films got. Certainly, the response The Descent received, I never thought for a moment I’d made a film the critics would like. But they did and it was wonderful. I had to blank that out though because I knew from the start that this wouldn’t get the same kind of reaction because it’s not the same kind of film. It’s pure pulp entertainment, the UK equivalent of grindhouse I guess. That’s not necessarily going to be a big hit with critics. Those who don’t like it really hate it. And those that like it really love it.

Why have horror and splatter become more mainstream?

It’s just become increasingly acceptable. It’s what you can get away with and people will watch.

The Prime Minister John Hatcher (Alexander Siddig) and his advisor Canaris (David O’Hara) seem to be modelled on Tony Blair and Alistair Campbell.

Oh definitely, it was kind of unavoidable. There’s a scene we cut from the film where Hatcher does a speech to the press and Alexander did the most extraordinary Blair impersonation. But I just thought it was a bit too broad comedy to make it into that sequence so it didn’t make it into the movie. It was an interesting play on things though.

You like to work with the same actors from film to film. Why?

Because they’re my mates, they’re great actors and it’s great fun working with them. We both like to push each other a bit. I want to challenge them each time, I don’t want them to come in and walk it, do the same thing. We’re only interested in working with each other if we get to do something different each time, find new characters and so forth.

Some of your extras were Hare Krishnas. How did they reconcile the violence in the film with their beliefs?

I don’t know. I guess they realised the violence is fake, so they didn’t have a problem with it.

You obviously enjoyed shooting the car chase scenes. Was it good preparation for your next film, Drive, starring Hugh Jackman as a stunt driver?

In a way, but they’re very, very different films. The style of car chase and the style of the film are a million miles away from the chase at the end of Doomsday.

Finally, can you reveal anything about your forthcoming script for Sacrilege?

I can’t tell you too much because I haven’t figured it out myself yet. It’s kind of Unforgiven meets The Shining – a very, very dark horror-western, set in a gold rush town. But I’m only just starting to write it now.