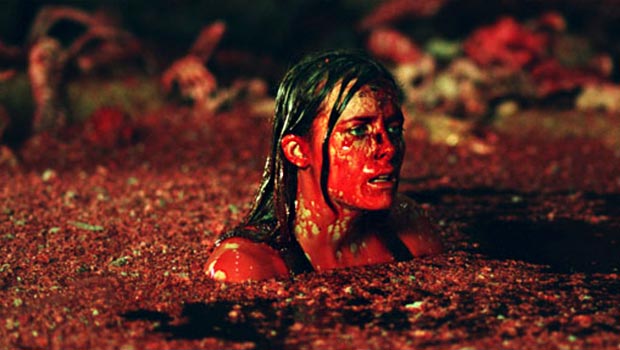 Summary: It is a complete peach of a movie, and one that should be watched by every member of the cinema going public.

Before I start reviewing The Descent, the second major feature from Dog Soldiers director Neil Marshall, I feel a slight confession might be in order: I scare really easily. Show me any kind of horror film, no matter how badly acted, poorly shot or unimaginably stupid, and it’s more than likely that I will be terrified for at least part, if not all, of it. In fact, if one equated being a horror aficionado with being a food critic, then it is quite likely I would suggest Garfunkels be nominated for a Michelin star.

The plot of The Descent is simple but extremely effective. Sarah, Juno and Beth are three old friends who used to engage in all manner of extreme sports, until Sarah’s husband and daughter died in a car accident that Sarah herself survived. A year later, Juno brings her two friends to the Appalachian mountains (why are horror films always set in Appalachia? Its tourist board must be a happy bunch…) to join a merry little band of thrill-seeking femmes – wild base-jumper Holly and two Scandinavian half-sisters Rebecca and Sam – to do a bit of caving. 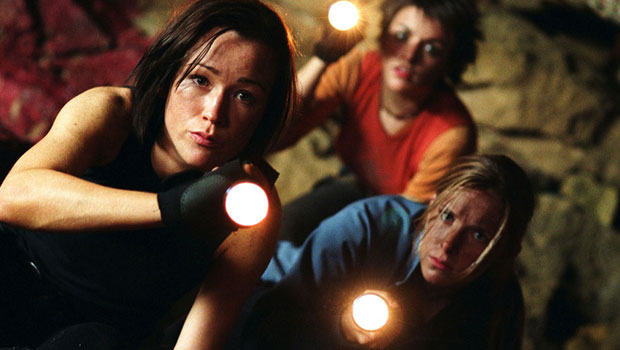 Alex Reid as Beth and Saskia Mulder as Rebecca

However, once inside the cave all does not quite go according to plan, as an unexpected rockslide blocks the party’s exit route. At first, the group has to contend with navigating an extremely arduous route out of the cave. But matters get far, far worse when the six discover they are not alone – the cave is also home sweet home to a band of carnivorous beings who have happily skipped more than a few generations in the evolutionary chain, are not too picky about what they chow down on for dinner, and are rather nifty climbers.

The Descent is a commendable film on many levels. Firstly, when was the last time you saw a horror film, or indeed any commercially viable film, which had an all-female ensemble? It might sound a little patronising, and it is a shame that it has to be said at all, but Marshall should be congratulated for providing good roles for several fine actresses. Secondly the budget of of just £3.5 million is quite an accomplishment.

The whole team do very well indeed, particularly Shauna Macdonald as Sarah, who convincingly charts her character’s development from fragile, grieving innocent to monster-stabbing, blood-soaked and slightly barmy avenger. However, the film’s standout performance comes from Natalie Mendoza. Although ostensibly the film’s ‘baddie’, Mendoza never allows the secret-hiding Juno to become an unsympathetic character, rather one who doesn’t know how to properly deal with the events that she in part has caused.

But Juno is mainly such a great character because not only is she strikingly beautiful, but because she is also tougher than Rambo, dispatching monster upon monster, if not with ease, then certainly with passion. Mendoza is so very, very good, she makes Willis, Vin Diezel, The Rock et al look like something out of ‘It Ain’t Half Hot, Mum’. Give this woman her own movie, pronto. 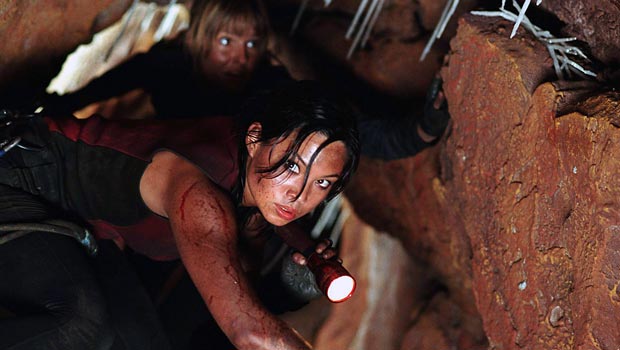 But The Descent is not just about action. It is also a brilliant exercise in audience manipulation, building tension beautifully and then unleashing some fairly terrifying moments. Within its first couple of minutes, where we experience a truly horrific car accident, the film clearly states its intention to scare the bejeezers out of its audience, and continues to do so right until its delicious dénouement.

Along with some rather pleasing homages to classic movies (including, as far as this reviewer could spot, Apocalypse Now and Carrie) The Descent boasts fantastic action scenes, nail biting horror, impressive acting and a couple of darkly comic moments that ever-so-slightly ease the almost unbearable tension. It is a complete peach of a movie, and one that should be watched by every member of the cinema going public.

I wouldn’t normally resort to this kind of cliché (well, maybe I would) but if you are going to see one film this year, go and see The Descent.