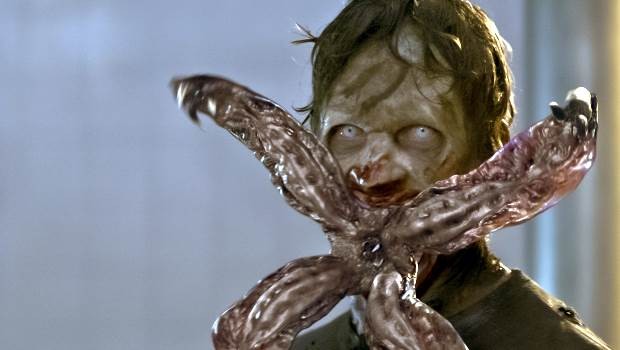 Summary: This is not a film to have an intellectual debate over with friends afterwards, it is a B-movie style horror which will appeal to computer game obsessed teenagers.

Paul W.S. Anderson returns to the director’s chair for the fourth installment of the Resident Evil horror franchise with more guns, blood and zombies than ever before and all in 3D.

Once again it is Anderson’s wife Milla Jovovich who leads us through the action, wiping out thousands of baddies with her endless supply of guns and swords and enlisting the help of some familiar and unfamiliar friends.

Afterlife is a relentless violence fest with the story a mere guiding map for more blood and mayhem brought into sharp focus by the 3D imagery. It is like watching an advanced computer game played out on the big screen, only with no controller and just the use of ridiculous large glasses.

Jovovich told a packed press conference after the film’s private screening that the film was really full on, especially as it was shot in 3D. “We had to make the fight sequences as realistic as possible because in 3D the audience can see if we are hitting each other or not. As a result we suffered some pretty serious injuries, but it was worth it.”

The fact that the film looks like a blown up Playstation game is not surprising because it is indeed based on a computer game, which is proving a popular trend at the moment what with Prince Of Persia: The Sands Of Time doing well at the box office and Syfy teaming up with THQ to make the forthcoming Red Faction: Origins movie.

For those of you interested in the story of Afterlife, Alice (Jovovich) continues on her quest to find more survivors in a world ravaged by a viral infection and consisting mostly of the undead. On the way she comes across an old friend and makes some new ones as they attempt to find a safe haven from the zombies and henchmen of the evil Umbrella Corporation.

The action is laughably over the top, the characters one dimensional and the plot pointless. There are some action sequences where it is so obvious the actors are hanging on wires they might as well have left them visible in the film, including one scene where one of the good guys jumps to save a plane from falling off a sky-rise building.

The main bad guy in charge of the Umbrella Corporation is a carbon copy of the black suited bad guy agents in the Matrix films, and in fact there are scenes where he dodges bullets in slow motion that look like they have literally been dragged from the Wachowski brothers’ films. The sad difference being that those slow motion shots now seem passé and humorous, not stunning as they did originally.

But this is not a film to have an intellectual debate over with friends afterwards, it is a B-movie style horror which will appeal to computer game obsessed teenagers and testosterone fuelled guys of all ages, and maybe even a few women thanks to the female lead cast. The previous edition of the franchise made a cool $150m worldwide and we can expect much of the same from this latest version, and the same again with the likely next installment.