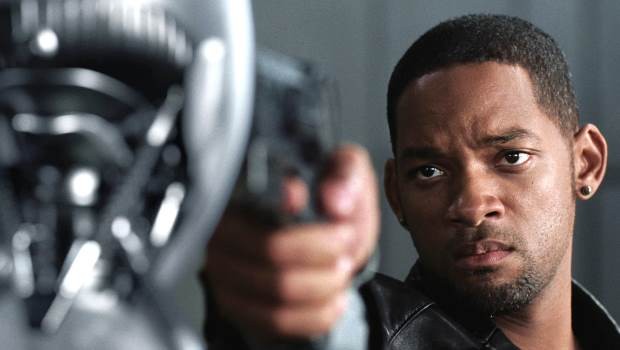 Mr Smith Goes to The Dorchester

This time it’s war. The major studios are preparing for battle, all with one simple aim – total summer domination. They have lined up their front line of attack in the form of trailers, adverts, posters and promotional soft drinks and are now moving in for the kill, dropping their finest warriors behind enemy lines to perform crucial, top-level interviews, telling the world why their film is best of the best.

And so it was that us mere mortals at Future Movies wandered into enemy lines when we were invited down to the top class Dorchester hotel to visit Will Smith as he began his assault on Blighty to promote the juggernaught that is I, Robot. It was a sticky Tuesday afternoon and as I approached the gilded, revolving doors I felt decidedly under dressed for such a swanky establishment. However, any sense of paranoia soon dwindled as I entered and saw that there were people within who looked like they’d been living in The Shire for twenty years and had really let themselves go.

I was escorted through the fine art deco corridors and into a large meeting room. It was then that I was truly shown how the glitterati live as I was offered a small beaker of water and a collection of jammie dodgers. “I have arrived” I thought to myself. After waiting a mere fifteen minutes, Mr smith entered the room. Dressed casually and modestly in a dark blue summer top and khaki slacks, he seemed very relaxed. I noticed, however he was sporting a sparkling diamond earring in each lobe. There was that petty, jealous part of me that wanted him to be a completely arrogant egomaniac. He is after all one of the most bankable, A List Hollywood star in the world, with millions of adoring fans, a bank balance the size of Swindon and the kind of looks and physique that any man would kill their granny for. Indeed it is a body that he shows off proudly in the very opening scenes of I, Robot, when his character, Detective Del Spooner takes a shower without the aid of a shower curtain. As any self-respecting journalist will know, this seemed a good starting line of questioning. With such an Olympian figure, did he enjoy showing it off?

“The nude scene was bizarre and awkward”, he laughed. Jokingly referring to it as “deep nakedness”, he explained that his character “suffers from a recognised condition called ‘survivor’s guilt’, which is when you survive an accident and you feel that you should have been the one who died and not the other victims. One of the symptoms of the condition is paranoia and that can include keeping doors open or showering without any curtain to cover you”. While this may be the case, as he said this he started smiling. He knew what was being implied by this question. And that’s part of his charm in person – he’s very sharp.

He is clearly too clever to let his ego get in the way of the reality of his job. As a kid he had always wanted to be a scientist and was all set to go to the exclusive MIT. That is, until he saw a certain sci-fi film set in a galaxy far, far away. “Star Wars blew me away,” he beamed, “I first saw the power of the movies and it made a spiritual connection with me”. He then went on to achieve fame early on in his life as the lead on the popular sitcom The Fresh Prince Of Bel Air, which he saw as a good chance to cut his teeth before making the leap to the big screen. “Television was the definitive turning point for me. It was a great training ground for film”. Despite having a successful rap career on the side, he always knew what his first love was. “I was always an actor who rapped”, he winked. Yes, well Eminem was never going to lose any sleep over such gritty urban anthems as Boom, Shake The Room

Smith’s spiritual awakening due to Lucas’ space opera may go on to explain the choice of big budget films he chooses, like Men In Black, Independence Day and now I, Robot. Clearly Mr. Smith enjoys indulging the kid within. Indeed, throughout the interview he came across as a kid in a sweet shop, clearly ecstatic to be earning a living in one of the best ways possible and he knows that he ultimately owes his success to the people who go and see his films. When asked whether or not he paid attention to reviews he was philosophical about his more popcorn-friendly part of his CV; “these kind of summer movies are review proof. People will go and see them even if the reviews aren’t that favourable”. He fully accepts however that he has had his fair share of failure. With Wild Wild West “we just missed completely”, and he described the poor reception to Bad Boys 2 as the most painful moment of his career. Films like Ali, The Legend of Bagger Vance and Six Degrees of Separation “are films where the reviews matter greatly” because they are smaller and as they don’t involve Smith blowing stuff up, they need positive reviews for people to see them.

There doesn’t seem to be that concern with his latest offering. I, Robot has opened to massive Box Office takings throughout the world and not without good reason. It is a superior blockbuster, with great visuals, more than enough of the original Asimov source novel to give your brain something to mull over and some of the best action set pieces seen in recent years. Overall Smith showcases the kind of physical performance to support the case that he is the best action star in Hollywood working today.

As Det. Spooner, Smith plays a technophobic cop with a grudge against these new NS–5 robots which are rapidly becoming more of a must have gadget than the iPod. Sporting vintage clothes and owning ‘old’ technology like a CD player, Spooner is wary of all these new developments that are “shittin’ on the little guy”. By contrast, Smith embraces modern technology wholeheartedly. “I am a serious techno geek! The iPod is the greatest invention of the millennium! I think that my Technics 1200 turntable is the oldest thing I own”. When asked his thoughts on one of the messages within I, Robot, that of human’s over reliance on technology at their own risk, Smith is quite firm that this is not the only way to interpret the film. “Sci fi allows people to think about the possibilities of the future and approach them positively. In the movie technology is not at fault, human logic as at fault”.

It is clear that Smith is very proud of this film and that infectious enthusiasm was tangible in the room as he bounded around, doing a hilarious impression of what he would be like as an old actor, still trying to perform all the intensive running that he seems to do in every one of his films. “I do a lot of running, that’s true! I’m currently about to have a romantic comedy coming out and even in that I do a lot of running”.

After a brief photo session Smith disappeared back into the bowels of The Dorchester and I went back into the real world. It was so refreshing to meet an actor who is not standoffish, terse or miserable when talking about his work. He also knows not to take himself too seriously; we engaged in a very surreal whistling competition, after he challenged me to see if I could wolf whistle louder than him. I obliged, unwilling to reveal that I won the East Blandford whistling contest five years in a row and competed in the 1988 Seoul Olympics as a 100metre freestyle whistler and gave it my best shot. Looking feasibly impressed, he retaliated but I was the clear victor. As I left the Dorchester I smiled all the way back to Marble Arch tube. Smith has earned his place amongst Hollywood’s elite and is enjoying every minute of it, but he’ll have to try harder next time if he wants total domination when it comes to whistling!