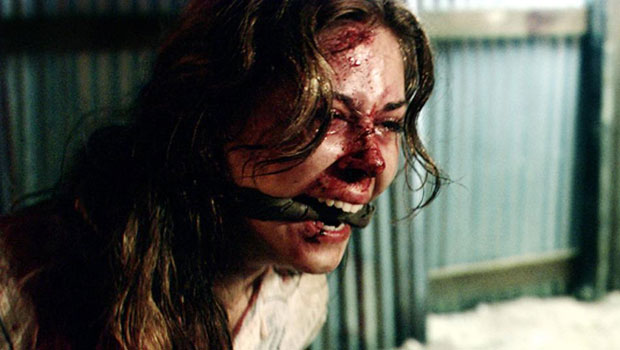 Summary: This is a nasty piece of filmmaking that leaves a horrid taste in your mouth.

Brit backpackers Kristy (Magrath) and Liz (Morassi) have been doing the classic gap year thing, travelling up Australia’s west coast, drinking, meeting fellow travellers and generally having a hedonistic, fun-packed time. Somewhere on the road they have hooked up with Sydneysider Ben (Phillips) and the three plan the road trip of a lifetime, driving through the outback to Wolf Creek, a giant meteor crash site in the middle of the desert, before heading up to Cairns and Darwin. They celebrate in true English style by getting drunk.

The next day the trio sets off into the bush where they discover a different Australia. Inclined to treat it all as a bit of a Crocodile Dundee style joke, they are nevertheless startled by the casually offensive sexism that they encounter at a truck stop. Driving on through a desiccated landscape of bullet-riddled road signs and bright red earth, they arrive at the crater. Ben and Liz have been eyeing each other up for a while and during the afternoon they share a few sweet stolen kisses while Kristy dozes in the shade. Returning to the car as dusk falls, they are slightly spooked to discover that their watches have stopped and panicky when the car won’t start.

Preparing to hunker down and sleep in the car, they are relieved to see lights approaching. Their rescuer is Mick (Jarratt), a real Aussie larrikin. He inspects the car and offers to fix it – the only thing is, the spare parts are back at his camp, a disused mine, quite a long drive away. He offers to tow them and waves away any question of payment. Relieved, they gratefully accept. The drive to the camp takes hours; when they finally arrive they are glad to cook a meal and drink some of the fresh water that Mick thoughtfully provides; he gets to work on the car while his guests fall asleep.

When Liz wakes up the next day she is bound and gagged in one of the miner’s huts. She manages to free herself and, leaving the hut, sees the stripped car and Ben’s blood-stained sleeping bag. Then she hears screams coming from one of the other buildings and, peering inside, finds Kristy being tortured by Mick, the corpse of his last victim hanging on the wall. Liz rather cleverly starts a fire using meths from the camping stove and, while Mick is distracted, sneaks in to free Kristy.

A few weeks ago I was surprised and dismayed by how much I enjoyed The Devil’s Rejects. My reaction to Wolf Creek reassures me that I’m neither sick nor twisted. This is a nasty piece of filmmaking that leaves a horrid taste in your mouth. A fairly long preamble sets up Ben, Kristy and Liz’s characters; we see them hanging out, chatting and getting drunk, see the growing attraction between Liz and Ben – all quite enjoyable if slightly mundane. This serves to enhance the random nature of the nightmare they find themselves in later – without giving too much away, we grow to like the characters and identify with them, so watching Kristy being tormented and threatened with rape for what felt like ten minutes felt almost unbearable and exploitative. Later, in a scene involving a machete, most of the audience had their hands over their eyes. Kristy and Liz’s fear and terror is almost too real.

My biggest problem was with Mike. Bluff and affable, he seems quite normal, though anyone who starts telling you about their vermin killing exploits and experience with a shotgun on first acquaintance is probably one sandwich short of a picnic. And when Mike turns into a living nightmare, he keeps up his merry banter, which is initially amusing. But he’s too smart and all-powerful, almost godlike – and eventually unbelievable.

The film claims to be based on a true story and of course we’ve all heard about the Peter Falconio case. But if this is true then no-one would actually know what had happened to the travellers, so this is all speculation and deeply unpleasant speculation at that.