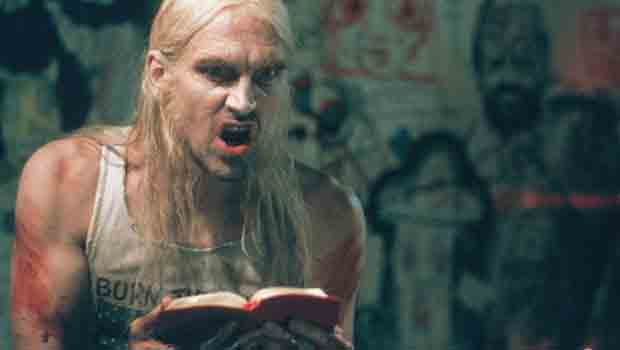 Summary: Its sick, but you can’t help but laugh as a woman gets mown down by an oil tanker.

The Devil’s Rejects begins where House of 1000 Corpses left off, with the murderous Firefly clan carrying on with business as usual; Baby (Moon Zombie), Otis (Moseley) and their mother (Easterbrook) enjoying a well-earned rest while Tiny (McGrory) drags the naked, battered body of their latest victim off for burial in the woods. Unknown to them, Sheriff Wydell (Forsythe) and a squad of armed policemen are on their way; Wydell determined to avenge his murdered brother.

After a vicious gun battle, Baby and Otis escape and arrange to meet their father, Captain Spaulding (Haig), though Mother Firefly is captured and taken into custody. Wydell plans to use Mother Firefly as leverage with the remaining members of the clan, but reckons without her insane will power and twisted loyalty. In the meantime Baby and Otis, waiting for their father, amuse themselves by terrorising some hapless travellers, finally killing them before heading for the safe haven of uncle Charlie’s (Ken Foree) whorehouse. Wydell, frustrated with legal methods, takes the law into his own hands, and the stage is set for a bloody, vicious showdown.

And that’s about it, plotwise.

I’m not a fan of the horror genre; I expected to cordially dislike The Devil’s Rejects and was surprised and slightly appalled at how much I enjoyed it. It *is* grotesque and violent and disgusting but it’s not terribly scary. It actually has more in common with outlaw films like ‘Bonnie and Clyde’ and even ‘Thelma and Louise’ than with today’s crappy teen horror. There are no supernatural influences, no cartoon villains – though Otis declares that he is the devil and orders a victim to pray to God to save him, the Fireflys are all too human.

The clever twist is that, having set up the Firefly clan as these depraved monsters, Zombie turns the tables on the audience and by the end of the film you engage with the Fireflys and see them as the heroes. He does this by showing their twisted loyalty as a pure and noble thing, and also depicts their very normal family dynamic: there’s a lovely scene where Baby decides she wants an icecream; Otis, driving, doesn’t want to waste time stopping; Baby and Captain Spaulding wind him up by chanting ‘tutti fucking frutti’ over and over again; then we cut to the two of them eating their cones to the accompaniment of Otis’ eye rolls. The family that kills together, stays together…

The look of the film is lovely. Zombie cites as influences the 70s horror classics like The Texas Chainsaw Massacre and Dawn of the Dead and they have clearly informed his production design decisions. Shot on Super 16, filmed entirely on location, the film has the grainy, gritty look of a western, all sweaty, sunburnt faces and filthy nails – the dirt looks real and the actors look beat. The fact that most of the action takes place by day mitigates the violence to an extent, and also makes the final nightime confrontation between Wydell and the Fireflys more brutal by comparison. But in fact most of the violence is no worse than anything in Sin City, and the macabre humour works in much the same way – its sick, but you can’t help but laugh as a woman gets mown down by an oil tanker.

Oh dear. As I typed that last sentence I began to worry about myself, Am I going to be making headlines of the Video Nasties kind soon? Do I need therapy?

Well, maybe, but not because of liking The Devil’s Rejects. It’s a surprisingly well-made, well acted and funny film, if not for the weak of stomach.