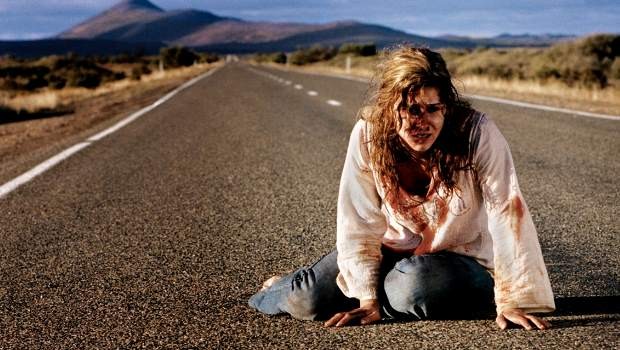 Kestie Morassi is an Australian actress with more than half a dozen feature credits to her name. These include Darkness Falls, Dirty Deeds and The Illustrated Family Doctor. A few words on her latest release…

Q. Was the finished film you saw very much like the initial script of Wolf Creek?

Kestie Morassi: “Absolutely, although there were quite a few times where Greg allowed us to improvise a little bit. So it wasn’t always word for word, and I think that was great for me in terms of getting my performance out. Just being able to improvise a little bit and not have certain places where you had to stand when you said the line. He used a hand held camera, so you were free to move around and that kind of helped, to give those kind of organic, natural performances.”

Q. When did you first become involved in the film?

Kestie Morassi: “Wolf Creek was just another audition I went for, hoping to get the part. I went for it without having read the entire script, and then I got called back for a second audition with Cassie, who’d already been cast. At first I thought ‘oh, a horror film, it could be a bit dodgy’ but when I read the whole script I was absolutely blown away by the relentless nature of the second half of the story. It just keeps going and going and going. And meeting Greg, he seemed like someone who really knew what he was doing, so I was very happy to get on board. As an actor you’re just happy to get a job, let alone being in something of real quality like this.”

Q. Did you ever suspect Wolf Creek would be as big as it has become?

Kestie Morassi: “Not at all, you can’t have that in mind when you’re filming, you can’t think ‘wow this is going to make a million dollars’. But at the same time when we were shooting, just the flow of it and the rushes that we’d look at every day, we knew we had something kind of special. And we felt that on set, everyone who was working on it absolutely gave it their all because we knew we were a part of something that could be amazing.”

Q. Given the darkness of the material was it incredibly intense to work on, or fun?

Kestie Morassi: “Most of the time we had a laugh. I suppose you have to, because the subject matter is so full-on that you need to keep a bit of a light mood around the set. It was amazing because all the people we worked with, everyone just clicked. We felt like we’d all known and worked with each other for years, so that was a unique experience for me. But for my scenes in the ‘torture shed’ I wasn’t able to indulge in much humour for those three days, I needed to keep myself in a certain state. There was a whole lot of screaming and agonising going on, and I felt like it would break my concentration if people were joking with me. The scene had to be treated quite respectfully in that sense. But that’s the only time in the film that I remember us being really, really serious about it.”

Q. John Jarratt is your tormentor in those scenes, and he has a wealth of experience on film and tv – how did he interact with the three of you during the film?

Kestie Morassi: “He said to me during the rehearsal period that he wanted to keep his distance from us before we started shooting because he wanted us to believe that he could be this madman. So he tried not to get too close. Then after our big scenes were filmed he allowed himself to open up. He is such a wonderful, beautiful, loving, caring family man and he’s got so many stories. He’s a really, really lovely man – if you can believe it after seeing the film.”

Q. A large part of the Australian audience know him from gentle soap operas and series like Better Homes & Gardens – does this mean he is surprise casting in his role?

Kestie Morassi: “Absolutely right, and that’s so good for an actor to be able to do those diverse roles. He was with the project long before it got going. I think he was in discussions with Greg for quite some time about playing the part. He had a lot of ideas and was really enthusiastic about playing this man.”

Q. If he kept his distance to begin with how did you, Cassie and Nathan prepare for your roles as these three friends?

Kestie Morassi: “Cassie and I lived together in an apartment through the duration of the shoot. They thought that would be really good because we could get to know each other and these girls are supposed to be backpacking together and in each other’s pockets. I’d worked with Cassie before, she was the star of a kid’s show called Crash Zone and I came in for a guest role. And I’d also worked with Nathan on another kids’ show. When my boyfriend saw us all he said it was like we’d worked together for years. So I suppose the casting was clever in that sense, that we really did get along and felt like we were a little group, a little family.”

Q. And you also got to play the role with an English accent. How was that?

Kestie Morassi: “It’s been funny watching the film with a UK audience because I was extremely aware of my accent and how it came across. There were one or two words that just sounded slightly Australian to me, but you shouldn’t really care in the scheme of things. If you’re worried about someone’s accent then the film’s really not doing its job.”

Q. As well as the emotional intensity of your role there’s a great deal of physical stuff you go through. How hard was that?

Kestie Morassi: “Well, because it was a very low budget film there was a morning where I was doing what you might call ‘action scenes’, running through the fog to get away from the Mick’s mining camp. And because it was so early in the morning, and we had to shoot before the light went away, there wasn’t any time to tape up my feet. So I was running barefoot through the scrub, and because it was cold my feet were really, really numb. I didn’t realise the millions and millions of prickles that were in my feet until they thawed out in the middle of the afternoon. That was pretty full on, being in the make up bus, screaming, getting prickles pulled out of my feet.”

Q. It’s not quite so bad if you’re suffering in the cause of a good movie rather than a bad one though, is it?

Kestie Morassi: “That’s right, I did it for the team!”