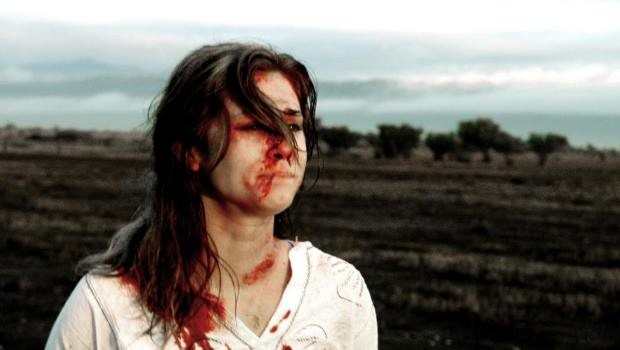 Australian newcomer Cassandra Magrath has been acting since childhood, and became well known for her performance as Zoe in the tv series Ocean Girl. Other series include The Wayne Manifesto, The Crash Zone and Sea Change. In Wolf Creek Cassandra Magrath alongside Australian Kestie Morassi played two British backpackers living out the final days of their holiday Down Under.

Q. Is the finished film very close to what you thought it would be?

Cassandra Magrath: “It’s pretty much the same, although a bit shorter. There are a couple of scenes cut out here or there, but it’s pretty much the same story. The only other thing that was changed, and it is in the film but not as much as it was in the script, was this sense that the further that they get away from town the stranger and weirder everything gets quite subtly and slowly. That was something that really, really stood out in the script when I read it. And it’s in the film, just not as prominently as it was in the script. Lots of scenes were cut out. There was one version of the film that I think was two and a half hours. That was a long, long tortuous movie.”

Q. How tough were the more physical scenes for you?

Cassandra Magrath: “It’s really challenging in a strange way, not the way that you’d think. It’s not challenging to pretend to go through something horrific, it’s more challenging to go from hanging out on set with a few people straight into such high drama on the word ‘action!’. That was the most challenging thing, I didn’t feel upset by filming any of the scenes. I had a couple of amazing nightmares, but apart from that it was all fun.”

Q. Given the story you are telling did the wide open spaces of your locations give you the creeps at all?

Cassandra Magrath: “Not at all, I was out in those locations and couldn’t quite believe that this was my country. I left it thinking I should get out there more, it’s so beautiful. That’s the thing about the film, there’s an evil undercurrent against this beautiful backdrop and when you get out there that land is really something else. It’s quite a place. I can’t believe I live in Australia and I’ve hardly seen any of my own country.”

Q. It’s ironic then that the film might discourage tourism into the Outback, isn’t it?

Cassandra Magrath: “It depends. It will definitely feed into a certain psychology about backpacking. There was a time when Australia was considered dangerous because of things that could happen and then it sort of went away for a while. But this film will bring it back into peoples’ minds. But if you want to see how beautiful Australia is, I think people know that you’re unlikely to get killed by a psycho. Just don’t drink any water, and don’t buy a car that will break down.”

Q. How did you Kestie and Nathan prepare to play three close friends in the film?

Cassandra Magrath: “I didn’t think it was a good idea to create some false friendships on screen – especially because we knew that it was going to be such a great movie. So I really wanted to make sure that the three of us were going out for dinner together and hanging out as much as possible. That way we could get a banter and a dialogue between us that was comfortable, and act it out better on the screen.”

Q. When you first met the Australian press to promote the film what was their reaction?

Cassandra Magrath: “People absolutely loved it. It was interesting to have people be really excited about it considering it’s so dark. But yeah, there have been really mixed reactions within that, they’ve been moved to tears or couldn’t watch it, but the reaction was primarily positive.”

Q. What expectations did you have for the film when you were making it?

Cassandra Magrath: “When I read the script I knew that it would be a cult film, and when I met the director I thought it could be quite an amazing impact movie. Then when we were filming it and I saw it all come together I just thought ‘yeah this will do pretty good’. It’s great, I’m so happy for everyone. Here’s this tiny little movie that we made in the bush and it’s just done incredibly well before it’s even opened in cinemas. I didn’t know that could happen.”

Q. Are you a fan of horror films normally?

Cassandra Magrath: “No, I hate being scared, it’s the worst feeling in the world. I don’t watch horror films, I can’t watch them on TV, I just don’t like being afraid.”

Q. So can you watch Wolf Creek as a dispassionate audience member then?

Cassandra Magrath: “Of course, it’s got my favourite car chase sequence in any movie I’ve ever seen – I totally enjoy it.”