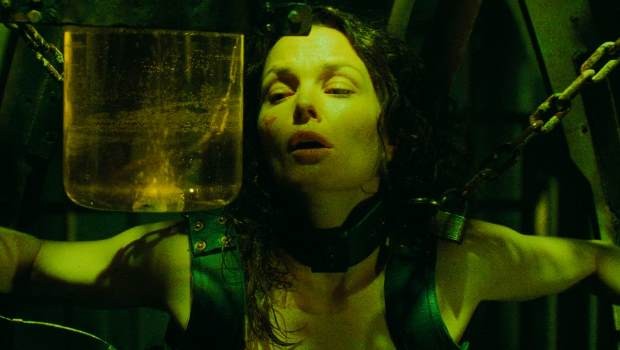 Summary: The gore is unique and clever which distances itself from other bloodthirsty films, and the twists are better than ever and still throw me after four or five viewings.

Saw II is in many ways a completely different film to its predecessor. It’s still based around psychotic mastermind Jigsaw and his attempts to make people appreciate life through his ‘games’, yet the film fails to develop any real relationships throughout the film. Although it’s not a convention within the horror genre, a little bit can really help shape the whole film as seen in contemporary productions ‘Hostel‘ and ‘Descent‘.

This doesn’t mean it’s bad, the gore element of Saw is much higher than in the first one, whilst there is a better worked multi-stranded storyline which sees the police brave attempts to save Jigsaw’s hostages. With policeman Eric Matthews [Donnie Wahlberg] fighting against the clock to save his son Daniel [Erik Knudsen] as well as six further prisoners before they die from a deadly nerve gas. The traps are better too, with the introduction of a furnace that sees character Obi [Tim Burd] locked inside, and the syringe pit is really a stomach churning moment too with character Amanda being hurled into it.

Whereas Saw was often referred to as a psychological thriller, Saw II has a much more horror theme to it, with some of the suspense being lost again due to the director’s inability to develop character personality. It’s a big loss as Saw’s original narrative was filled with curiosity and tension, which covered up the general lackluster acting common within the horror genre.

It’s a decent addition to the growing Saw series. The gore is unique and clever which distances itself from other bloodthirsty films, and the twists are better than ever and still throw me after four or five viewings. They could have fared even better had they cut the number of Jigsaw’s prisoners down and attempted to make the audience empathize with their situation. Good horror film, best growing series around by miles.