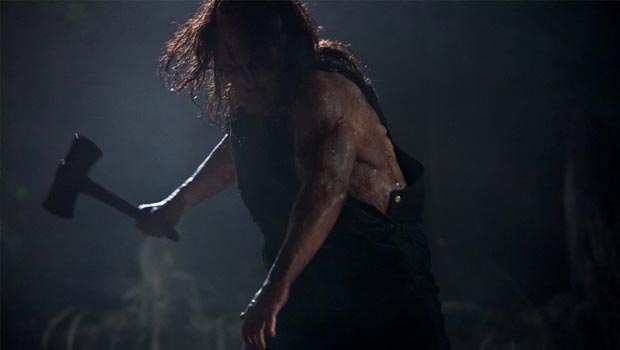 Summary: This isn’t a film for all, yet thrills will rush through the spines of genre fanatics on its way to gaining cult status.

Horror movies have been too straight laced of late. All this torture porn and sadistic behaviour is getting a little tiresome with the likes of Hostel, Saw, Captivity and the Halloween remake all taking themselves far too seriously. The outright slasher fun epitomised by the Friday the 13th, Nightmare on Elm Street and Halloween series has been lost somewhere in favour of focusing on inane plots failing miserably in their plan to make us care about the victims and be disturbed by the villains. There has been a distinct lack of cheering on the purveyor of the blood-letting as he appears in the most random places wielding a threatening weapon. Thankfully, Adam Green has realised this is the case and brings us Hatchet, a deliriously gory retro slasher movie complete with cardboard characters, their lame jokes and a monstrous bad guy who rips them limb from limb. What more could you want?

With a tagline of “It’s not a remake, it’s not a sequel and it’s not based on a Japanese one”, there is every indication Hatchet knows its exact audience and what they want to see. Sure enough, a pre-title sequence finds Freddie Kruger’s human self, Robert Englund, making a brief cameo fishing in a swamp before being brutally dispatched along with his friend. When the first scene features a man having an arm pulled off, guts ripped out and then torn in half with the aid of gruesome yet cheap special effects, it is pretty clear Green is going for the instant gratification of explicit deaths shown in full rather than leaving anything to the imagination.

Of course, getting a group of characters together is necessary for a slasher film to be enjoyable so the action then moves to a nearby town where brokenhearted college boy Ben (Moore) ditches his friends during a pre-Katrina Mardi Gras to go on a cheesy haunted tour of the swamp. The assorted bunch of an old married couple, bickering wannabe adult movie stars, their sleazy filmmaker, a loony tour operator, wise-cracking black guy and girl with a secret to hide cover the key demographics for some leftfield comedy and a little nudity, but the most important character is the evil killer of the piece: Victor Crowley (played by Kane “Jason” Hodder). Disfigured from birth, he was rumoured to have been killed by his father in an accident at their home, but some people believe they can still hear him calling for his dad – and he doesn’t like people trespassing on his swampland.

Nothing is taken seriously in Hatchet, and nor should it. The sight of Crowley hack at the tourists, ripping their heads in two by pulling them apart at the jaw and smashing them against walls is entirely acceptable when placed within the trashy 1980s style of horror filmmaking. Fun is even poked at Victor Crowley himself: the serial murderer with a ridiculously non-scary name is given laughable elephant man-style deformities that are described as such by one of his victims. Green is well aware non-horror fans will baulk at Hatchet and probably claim it is an example of the genre’s inadequacies at good plotting or character development. In fact, it’s a perfect representation of how much fun slasher flick used to be. This isn’t a film for all, yet thrills will rush through the spines of genre fanatics on its way to gaining cult status.