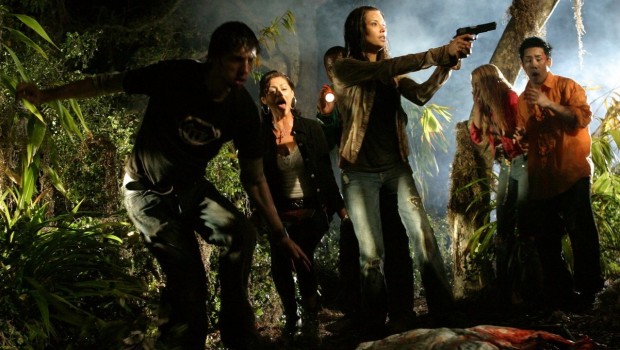 Fun-filled slasher movie Hatchet is writer-director Adam Green’s follow up to the indie comedy Coffee & Donuts. The story of a deformed maniac stalking a group of sightseers in the swamps of Louisiana, Hatchet has been a big hit with audiences at horror festivals, and a sequel is already in the works. “The studios hate horror movies,” Green tells Matt McAllister.

What sets Hatchet apart from other slasher movies?

What Hatchet brought back was having good actors and a good script. The genre had become so self-referential, and we wanted it to be real. We wanted to have good characters that you could care about – I mean I love 80s slasher movies, but too many are just about killing teenagers in different ways, and they don’t pay attention to the characters. We wanted to make the bits in between the killings just as entertaining. Audiences have kept coming up to me and saying how much fun Hatchet is – which is the best thing anyone can say!

Was the film a deliberate attempt to move away from the exploitation horrors and remakes that have been in vogue over the last few years?

Well, Saw was a good thriller, but then Hollywood saw the success of it and tried to copy it. And Hostel – there was a really interesting idea at the centre of that movie too… But I’m anti-remake, and the studios keep putting them out. I mean, the executives in charge at the studios hate horror movies. They’ll say that they’re fans, but they would never go see a horror movie by choice. They’ll say to the director of the latest Friday the 13th, “This one’s got to get naked” and “This one’s got to die”, and stick rigidly to a formula. So at one of the meetings that go on at the studios I said, “Well, what about this original idea that I have…”

The audiences are to blame too though. They always moan, “Why don’t Hollywood give us any original horrors?” And the only thing I say is, “It’s because of YOU! It’s your fault!” I mean, have you seen Behind the Mask? It’s this great horror mockumentary. It opened against The Hills Have Eyes II – and all the horror fans went to see that and didn’t go and see Behind the Mask. I wish they’d realise that Hollywood only cares about its wallet. If a film’s a success, the studio will be like, “Oh wow, they like this, we’ll make more of this!” But the fans just don’t seem to realise.

Was it a struggle to get Hatchet made?

It’s very difficult for an independent filmmaker to get anything made in the Hollywood system. What my agent did to get the money was to go to the investors with a great idea and a great script – but that’s not enough. Our tagline – “It’s not a remake. It’s not a sequel. And it’s not based on a Japanese one” – was taken from a rejection letter we got from a studio. They said they loved the script, but it didn’t fit in with what was making money at that time.

So what we did was we put together a whole package including a mock trailer for Hatchet, like we’d already made the movie. The investors read the script and loved it, and then we said, “Oh, and just imagine this,” and gave them a million possibilities for making it. For a low budget horror movie their risk is very small – they’re going to make money even if goes straight to DVD. Also, what we did was to go on a few horror websites and got them talking about us like we’d already finished. We put the trailer up, and created this buzz around the movie before we’d even shot anything!

Are you going to go the way of Friday the 13th and make 10 sequels to Hatchet?

Well, I always said that I’d quit when Hatchet reached Manhattan! But I am going to do the sequel, because it helped me with leverage a little bit with the studio. But just one more, and I don’t want it to be much more polished than the original. I mean, the budget will be bigger, but I don’t want to lose anything about what was great about the original or use any CGI.

Part of the charm of Hatchet is the lo-fi look – especially the old-style special effects work from John Carl Buechler. Were you a big fan of his work?

Yeah, he made Troll, which was one of my favourite movies! He’s remaking that right now in fact – it’s great that he’s doing that himself.

I invited him to come in so we could show him where we were at with the movie. He asked me to describe Victor Crawley, and he immediately started doing all these sketches and wouldn’t let me see them until he’s finished. And when I saw the sketches I just knew he understood the character. Not only is he a director, but he knows everything about special effects. There’s no CGI anywhere in this movie. The gag in Hatchet that he’s the most proud of is the bit where the girl is crawling around with her jaw missing…I know that when we saw that on set, everyone was thrilled. Even John was sitting there smiling!

He was a total mentor to me. For instance, the scene at the beginning where Josh Leonard goes off to take a piss and Robert Englund’s in the boat. We didn’t have long to shoot the Robert Englund stuff because he had to leave, and when we turned around to shoot Josh Leonard it had stopped raining. I didn’t know what we were going to do, and John said no one would notice about the rain if we just kept the thunder going – and it worked! We kept the thunder going and no one noticed!

What was it like working with other legends of the genre like Robert Englund, Tony Todd and Kane Hodder?

Kane Hodder’s like the biggest badass in the world, and on set he was Victor Crawley and I think everyone was a bit scared of him. But then he’s also friendly to everyone and is just a nice guy – I know he’d hate me for saying that!

Robert Englund was just so professional. He wasn’t on set very long, but he was totally supportive of the movie – I really never thought we would get him. I’d met Tony Todd briefly before on the set of a movie John Carl Buechler was directing [The Eden Formula]. And with Hatchet he just responded to the script – Rev. Zombie is a very different character than in the Candyman movies, and the character should be back for the sequel. It was just great to be working with some of the biggest names in horror, and I think that it helped create a buzz about the movie with fans.

What about Joel Moore?

We just got along so well on Hatchet, and he invited me on to this other thriller he was doing, Spiral, and I ended up co-directing that. I never knew him before Hatchet, but now we’re great friends. After the audition for Hatchet it was obvious he was perfect for the role, and made for a really likeable lead character.

Would you like to work on mega-budget Hollywood pictures?

I’d love to. But hopefully by the time I’m doing that I’ll have proven myself on lower budget movies, and the studio will let me to make my own movie. Like what Neil Marshall just did. Even The Descent was a pretty low budget movie, and now he’s making a much bigger budget film [Doomsday]. I mean, if you look at Hatchet a lot of it is the characters running and stopping and running and stopping to keep the film moving. It would be nice to have a little bit more money!

Are you still lined up to direct the zombie western Dead West?

I’m attached to direct it, but it’s not signed. But I’m hoping to do that, maybe after Hatchet 2. It’s an amazing script based on a graphic novel – I am going to do it, but I’m not sure exactly when.

I mean, it’s ridiculous. Because why is it okay to rape somebody but you can’t show gore in a way that is meant to be fun? The MPAA threatened to give us an NC-17 which you don’t want – all the major theatres would be like, “We’re not touching that one”. If you look at the scene with the guy getting his head twisted round – it’s still in there, but we had to lose a few seconds, it’s a little less intense. But at least we can release the ‘unrated’ DVD later. And the UK is getting the uncut version. Only the Americans don’t like violence – so long as they’re sending missiles somewhere else…

You must be pleased with the reception of the movie. Many slasher movies don’t go down so well with the critics…

Yeah, and we never expected it. It’s won a bunch of awards at the Austin Fantastic Fest – it won the Audience Award for Best Picture. That’s the most important to me, as it’s voted for by the public. But I just think there’s a different generation of critics now who have grown up with horror movies and love them, which is perhaps different than it was in the past.

What are your three favourite slasher movies?

My three favourite slasher movies are the original Halloween, Mother’s Day and A Nightmare on Elm Street.

I’ve not seen it yet. Like, everyone I was like, “Why remake Halloween?” But if anyone can pull it off I guess he can. But I will say that I’m not going to see it at the cinema – I’ve got to look out for myself here. We’re opening at the same time on a fraction of the number of screens. I want as much box office as possible for us!