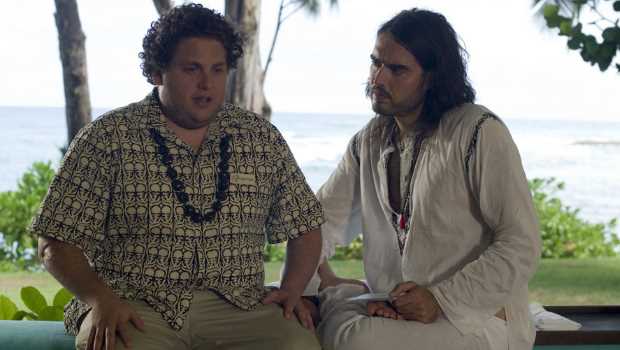 Summary: Although there’s plenty here for fans of Knocked Up to enjoy, Apatowphobes should probably steer clear.

Billed as Russell Brand’s Hollywood arrival, the comedian’s acting chops in Forgetting Sarah Marshall must have sufficiently impressed producer Judd Apatow as he’s already lined up to star in Apatow’s next feature, Get Him To The Greek.

The faux-Dickensian tabloid fixture is set to play a rock star, as he does here to respectable effect. Jason Segel casts himself as the lead in his own script and supplies Brand with sporadically funny lines, although it’s been reported that the Englishman won this role on the strength of his improvisation. Regardless, Brand shows that top comedians, for all their limited range, can be decent actors in the right parts, a heightened sense of timing affording them an advantage in comic fare.

Despite the presence of Apatow regulars like Bill Hader, Jonah Hill and Paul Rudd in supporting roles, this is neither Brand nor the producer’s film, ignoring the obvious thematic similarities to movies like The 40-Year-Old Virgin, Knocked Up and Superbad. Another Apatow cohort, first-time helmer Nicholas Stoller directs, yet he and Segel haven’t pulled off anything close to those movies. Nevertheless, this is a decent addition to the emerging genre of romantic comedy aimed at men.

Slobbish LA musician Peter (Segel) writes scores for a sub-CSI forensic crime series starring William Baldwin (effortlessly played by William Baldwin, though they should really have cast his brother Stephen for a laugh) and the composer’s girlfriend, the seemingly out of his league Sarah (Kristen Bell).

In one of the film’s earliest and most memorable scenes, a frisky Peter steps naked from the shower to greet the love of his life, returned home early. Pathetically naked when she dumps him, he pleads for a hug, his sagging, sob-heaving flesh seeming all the more ungainly against her clothed form.

Taking the break-up badly, Peter cries, drinks, engages in meaningless sex and generally falls apart. Berated by his step-brother Brian (Hader), he follows his advice and books a holiday in Hawaii, at Sarah’s favourite spot.

At the luxury resort, he discovers Sarah there with her new beau, the Brit rocker Aldous Snow (Brand). And to compound Peter’s humiliation, he can’t afford a room. Fortunately, a beautiful receptionist (Mila Kunis) hands him the celebrity suite for free after hearing his sob story.

Socialising with the vivacious Rachel, who’s endured her own romantic misadventures and laughingly believes in Peter’s unrealised dream to write a Dracula puppet musical, he slowly regains his confidence, hanging out with a stoner surf instructor (Rudd) and a tightly wound Christian newlywed (30 Rock’s Jack McBrayer), who’s having difficulty satisfying his wife’s sexual appetite. Hill plays a cringeworthy hotel employee and acolyte of Aldous’.

Peter and Rachel, Aldous and Sarah inadvertently find themselves socialising together and as one couple falls out of love, romance blossoms for the other. Crucially and heart-warmingly, no-one emerges as the villain of the piece, with the garrulous Aldous friendly around Peter and even Sarah’s infidelity put into context when she reveals the true extent of her ex’s lethargy and lack of ambition.

The gags are hit and miss throughout. For every funny sequence there’s another that falls flat and several of the sub-plots feel extraneous to the narrative. Although there’s plenty here for fans of Knocked Up to enjoy, Apatowphobes should probably steer clear.