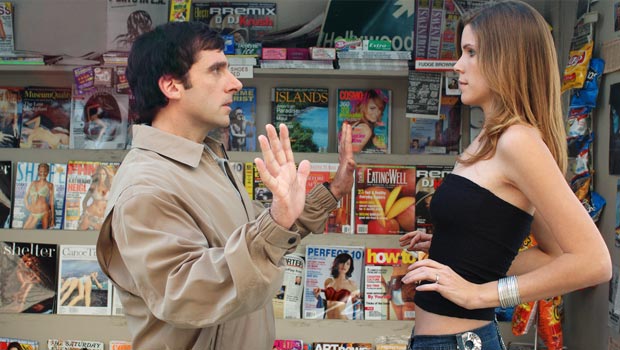 Summary: One the best films of the year, and one of the funniest I've ever seen.

These things go in cycles you know. A few years back the phenomenon of American Pie ushered in several years of the gross-out teen comedy, each one progressively more crude and less funny than the last until now, mercifully, that particular genre seems to have run its course. But the huge success of Wedding Crashers, coupled with the decent sized hit that The 40 Year Old Virgin is turning out to be, will doubtless give birth to a run of sex comedies aimed at a more mature audience. If they all turn out to be as good as these two then happy days, but sadly we all know that isn’t going to be the case.

The title pretty much says it all. Andy (Carell) is forty years old, and he is a virgin. He works in an electrical retailers and exists quite happily in the comfort zone of his neatly regimented life with his toys and his action figures. It’s not that he wants to be a virgin, but a combination of nerves, bad luck and circumstance have left him resigned to the situation. But when his work colleagues find out, they make it their mission to get him some action. So they hit the bars, the nightclubs, the speed dating in misguided and sometimes disastrous attempts to find Andy a woman. But when he meets Trish (Keener), someone he feels he can connect with, the problem then becomes him picking the right moment to tell her the truth and, as the poster so fittingly puts it, the longer he waits, the harder it gets.

If you’d told me that a mere six weeks after Wedding Crashers, an even funnier film was going to be released, I would have told you that such a thing wasn’t possible, that Hollywood simply doesn’t know how to create warm, intelligent, hilarious comedies that have something to say about the human condition. Co-writers Carell and Apatow set their stall out early with an erection joke in the first five seconds but, while it’s not a film to go and see with your mum, it isn’t crass just for the hell of it. It’s a joy to be in the hands of filmmakers who intuitively know the difference between rude and crude, who know that horny and heartfelt can exist in tandem and that jokes about race and sexuality are not the same as racism and homophobia. Scenes flow organically from one to the next, with no contrivance to set something up just for the sake of a gag.

There’s so much freshness to much of the verbal sparring that it could only have been acheived through improvisation, and Rudd and Rogen seem to be the masters, with a variation on Newman and Baddiel’s old “That’s your mum, that is” routine that’s particularly inspired. Carell runs them close mind you, with his (real, by the way) chest waxing scene an instant classic. After very nearly snatching Anchorman from right under the moustache of Ron Burgundy himself, he lands his first lead role and is just unforgettable. He never makes Andy pathetic or a figure of fun who’s deficient in some way. He’s just a nice guy who’s hopeless with woman and we’re on his side instantly.

He’s backed up by a quite superb supporting cast who inhabit their characters with charm and humanity. As his buddies, Rudd, Rogen and Malco are perfect, hilarious but, in their own way, just as clueless about women as Andy. Keener provides far more than just the love interest and gets some big laughs of her own and let’s not forget the tremendous Jane Lynch as Andy’s brusque but kooky boss.

For the longest time it looks like we’re going to escape the blight of the boy-loses-girl-has-to-win-girl-back finale but alas, it’s not to be. Thankfully, all is redeemed for the – apologies – climax which, while going the only logical way it can, also manages to develop into something completely unexpected and wonderful that will leave you hitting the streets grinning like an idiot. The 40 Year Old Virgin is not just the best comedy of the year, it’s one the best films of the year, and one of the funniest I’ve ever seen. Top that, Deuce Bigalow: European Gigolo.