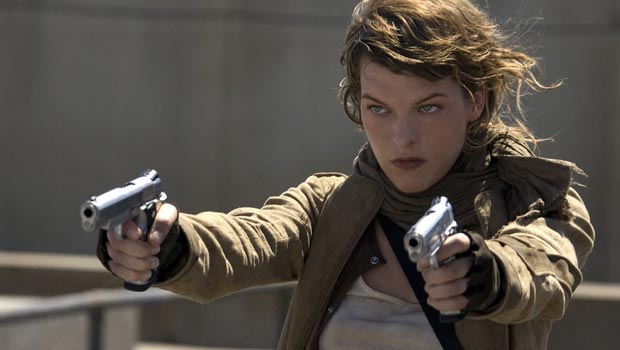 Resident Evil earns the dubious honour of becoming the first videogame-to-movie translation to notch up trilogy status with a Mad Max-style outing set on a post-apocalyptic Earth. The popular combination of zombies and a gun-toting Milla Jovovich have been fuelling this franchise past any criticism on its way to establishing a loyal fanbase hungry to see her kick dead butt. Resident Evil: Extinction offers more no-brain thrills with Umbrella Corporation still hunting for Alice (Jovovich) who could provide the genetic material needed to stop the eradication of humanity.

Set years after the T-Virus spread from an underground Umbrella Corporation laboratory through Raccoon City and across the globe to turn almost everyone into flesh-eating undead, the few survivors live on a dying, desert planet scavenging for fuel to stay on the move. In Nevada, Alice is going it alone while Resident Evil videogame favourite Claire Redfield (Heroes’ Ali Larter) makes her movie debut leading a convoy of survivors including faces such as Carlos Olivera (Fehr) and L.J. (Epps). Neither are achieving much more than killing the odd bunch of zombies. Meanwhile, Dr. Isaacs (Glen) is busy cloning Alice in the hope he can find a cure for the T-Virus until the real deal shows up on his satellite tracking device when she meets up with Claire. This sparks an unauthorised mission to re-capture her, but results in the creation of a mutant even more lethal than the legions of flesh eaters already wandering the planet.

The writer of all three Resident Evil movies, Paul W.S. Anderson, borrows heavily from films such as Mad Max, Alfred Hitchcock’s The Birds and even the original Resident Evil to try to bump up interest in this flagging series. Since Resident Evil: Apocalypse Anderson has abandoned the claustrophobic nature of the games which made them compelling in favour of set pieces packed full of hard to follow action loosely threaded together by an inane plot. Director Russell Mulcahy does well to give the Earth of Resident Evil: Extinction a suitably dirty look of degradation despite the obvious Mad Max comparisons, but as soon as any fast-paced movement or fighting is required close-ups and quick cutting ruin the enjoyment. The most potentially impressive set piece, when zombie crows descend on Claire’s group, is made laughable by special effects that pale in comparison to The Birds from more than 40 years ago. Given that the most interesting set piece re-introduces the killer laser corridor of the first movie, it’s hardly pushing the series into brave new territory.

In fact, Resident Evil: Extinction never really goes anywhere. There are ideas bounded around about Alaska offering a safe haven to survivors and brief glimpses of Umbrella Corporation’s inner circle of decision makers, but these are all left hanging presumably in case there is a demand for a fourth entry. There is a big, nasty mutant for Alice to battle at the end after a lot of zombie head shots, so it should tick most of the boxes for fans, but a new injection of character is sorely needed if throwaway scenes of vehicles driving through the desert and computer-generated maps are needed as time fillers to bump a move up to 90 minutes. Please try harder next time.