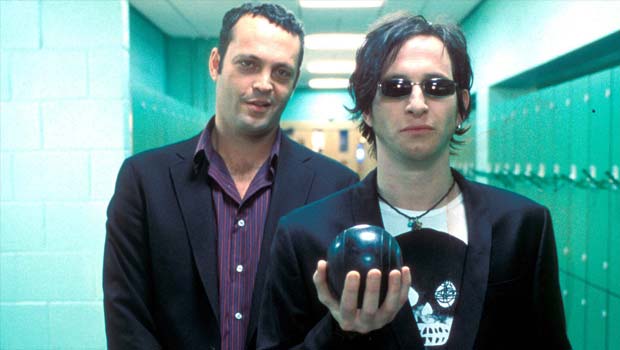 Summary: Grumbles aside, Blackball should make for an inoffensive trip to the cinema.

A certain Tim Firth will have had a pretty stressful time of it recently. For not only has Calendar Girls hit cinema screens, but UK audiences also have the chance to see the lawn-bowls themed Blackball. And Mr Firth has written the screenplay for both of them.

To find out what Future Movies thinks about a film inspired by the story of ladies from the Women’s’ Institute getting their kit off for charity, then have a butchers at our review. And if you’d also like to find out whether a film about lawn-bowls is as boring as it sounds, then read on.

Well, in terms of the above question, the short answer is no. Blackball isn’t going to single-handedly save British cinema, but it’s a likeable comedy all the same, even for those wouldn’t know a good in-swinger if it came curving towards them at a frightening pace.

Blackball is inspired by the real-life exploits of Griff Sanders, a sort of John McEnroe with a pint of scrumpy in his hand, and follows the fortunes of Cliff Starkey (Paul Kaye). Starkey, like Sanders, is a young Torquay lad born on the wrong side of town, whose inauspicious upbringing doesn’t hamper a prodigal talent for that most British of sports – lawn bowls. However, Starkey, like Sanders, finds that even his ability to get a round bit of black maple very, very close to a small white ball stands him in little stead with the starched-pressed and prejudiced members of bowling clubs to whom breed and bearing means all.

Cliff, along with his best mate Trevor (Johnny Vegas), is just too common to be accepted into a world dominated by the likes of long-standing regional bowls champion Ray Speight (James Cromwell), a man for whom the Daily Mail is a little too left-wing. Although Cliff beats Ray to become the new regional champion, he receives no adulation for his efforts from the bowls club – although he does wow the local crowd with his talent and his cheeky chappy persona. And when Cliff writes ‘tosser’ on Ray’s scorecard, (something which the indomitable Griff Sanders himself actually did in real life), this ‘outrage’, fuelled by the fact that Cliff is shagging Ray’s daughter (a delectable Alice Evans), gives Ray the excuse he needs to ban Cliff from bowling for 15 years. Which, again is exactly what happened to Griff.

It is from here that Cliff’s in-swinging career starts to pick up pace, and the similarity to Griff’s own experiences begin to wane. Although banned, Cliff’s notoriety, and his ability to play to the crowd, makes him a local hero. When he gets signed up by American sports agent Rick Schwartz (Vince Vaughn), his popularity soars to new heights. He gets picked for the national team to play in the Ashes against those damnable Aussies, starts advertising Diet Coke in perhaps the longest and most obvious bit of product placing seen for a very long time, and basically ends up becoming the Liam Gallagher of the sporting world. But as his future becomes increasingly controlled by the manipulative Schwartz, Cliff’s wood starts heading dangerously towards the gutter. Will his popularity cause him to forget his old friends and lovers, will his rock and bowls lifestyle destroy his natural talent, and will he end many years of English hurt by ensuring that the Aussies finally get beaten at something?

Suffice to say, Blackball doesn’t hold any huge surprises in terms of where Cliff’s big in-swinger finally ends up. But Blackball is a sports movie, and a sports movie, whether it be Rocky, Remember the Titans or, er Slapshot, always has the same trajectory: a rise, a fall, and a rise again. Blackball might not win any prizes for unpredictability, but who wants to see a sports movie that is unpredictable? It’s not the end result that matters, it’s the journey, and Blackball is able to reach its final conclusion in pretty fine company.

Paul Kaye as Cliff is undeniably the jack of the film, and no matter how many fine woods surround him, it’s the former Mr Dennis Pennis who holds the film’s life in his hands. And Mr Kaye shows himself to be able to hold the film as comfortably as Cliff Starkey holds his wood. Sporting an admirable Torquay accent, Kaye displays enough brash bravado coupled with a good heart to make his rise and fall and rise again wholly believable.

Cliff Starkey does become a little tiring, but any obnoxiousness is offset by the fine array of talent that Mel Smith, Blackball’s director, has managed to bring together. Johnny Vegas is, as ever, great fun to watch, even though his undeniable talent is constrained by a script that does not give him as many good lines as he deserves. Bernard Cribbins, playing Cliff’s grandfather Mutley, is a delight, and makes you realise how comforting an actor he is (let’s hope Blackball heralds a few more choice roles for a man who is little less than a British legend). Alice Evans as Kerry, Cliff’s love interest and Ray’s daughter, has herself admitted that compared to the boys her part isn’t particularly attention-grabbing (see Future Movies report on the Blackball Press Conference). However, she is feisty enough to give Cliff a little bit of his own medicine, although in reality she would be far too fit for a man with bad teeth who looks like he smells.

What is particularly impressive about Blackball, however, are all the other actors Smith has been able to employ. From across the pond, Messrs Cromwell and Vaughn are fun to watch simply because they are big Hollywood stars in a film about lawn-bowls. Vaughn, sporting bags under the eyes that Tara Reid would be jealous of, does his loud, over-zealous, not-as-cool-as-he-thinks-he-is Yank that he’s played from Swingers onwards. Cromwell’s screen presence, although superb, is sometimes a little too powerful and threatens to unbalance the film, not least because he can’t help giving the impression that he might just dispatch Cliff with a swift shot to the heart, boyo.

Apart from Hollywood talent, Blackball is also jam-packed with a great number of well-know English character actors too. James Fleet gets to be someone other than a kind-hearted bumbling fool, Kenneth Cranham plays the chairman of the British Bowling Association as if he was using it as cover for a massive Colombian drug deal, Imelda Staunton crops up occasionally, and Terry Alderton, Felicity Montague (Lyn from Alan Partridge) and David Schneider put in appearances too. Even Tony Slattery pops up, sporting a nice shade of eyeliner, which he must have worn for his character. Presumably.

So, without wanting to lay on the lawn bowls metaphor too thickly, Blackball gets very close to the jack in terms of it cast. Which is lucky really, because it’s quite short of length in terms of script and direction. This is not to say that either is bad. In fact, Firth comes up with a few cracking lines, and there is one pretty fine shot where Cliff throws his wood down a very long dining table, smashing all that lies in its wake. Yet this doesn’t detract from the fact that the script is not really funny enough to do justice to the quality of its cast, and there are times when the direction, particularly the art and set direction, just looks plain cheap and more than a little bit naff.

Grumbles aside, Blackball should make for an inoffensive trip to the cinema. It looks like the kind of film the cast had quite a lot of fun to make, which expresses itself across the screen, raising a few chuckles along the way. And apart from anything else, from here on in any film with Bernard Cribbins in it is going to be warmly recommended. The campaign for a knighthood starts now!