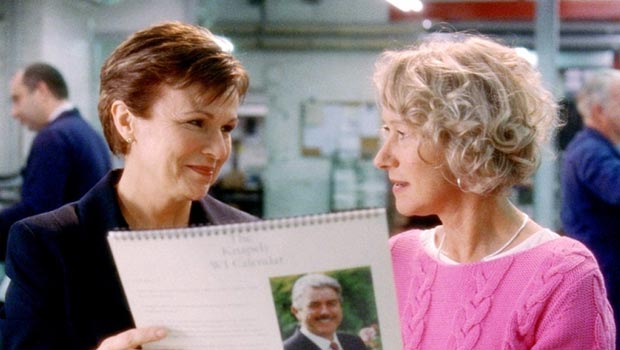 Calendar Girls has just about enough charm to snare you exactly where it wants you. You can tolerate all the cringe-worthy moments of English parochialism, small town quaintness and copious menopausal flesh, because Calendar Girls embodies a quirky and uplifting tale that just about gets away with it.

The age-old stuffiness of The Women’s Institute, Rylestone Branch, comes under attack when two of the groups’ freer spirits decide to apply a dying mans’ wish all too literally and expose the blossoming flower of womanhood in the form of a glossy calendar, ripe to adorn garage walls everywhere. After her husband John (John Alderton) loses his battle with leukaemia, Annie Clarke (Julie Walters) and her vivacious best friend Chris Harper (Helen Mirren) feel compelled to honour his memory in the way that is wholly inappropriate, sending shockwaves rippling through the entire WI. Very soon their tastefully crafted invention explodes into a national and global phenomenon. What was intended as a fund-raiser to buy a new couch for the hospital waiting room turns into a fully-fledged media feeding frenzy, and the unconventional pin-up girls, startled by their own success, are snared in the middle.

With an indiscernible visual style, no more interesting than say your average ITV “drama premiere”, Calendar Girls manages to succeed on the back of a surprisingly dynamic script and a number of characteristically assured performances from the capable ensemble cast, that levitates the whole shebang above small screen mediocrity. Director Nigel Cole gets the measurements correct, stirring in plenty of decent interplay and characterisation, predominantly amongst the women, with just a pinch of playful sauce and titillation intended as the films’ major selling point.

The central friendship between Annie and Chris, and the eventual strain it is placed under as their enterprise develops, carries the prevailing themes of the film dealing with femininity, friendship, community and the pitfalls of fame, coherently. Supporting roles are divided up between a host of familiar female faces from British television, all of whom are allowed portions of screen time to develop smaller side-plots. Annette Crosbie plays pragmatic Jesse, the matriarch of the group, pseudo-sophisticated Celia is played by Celia Imrie and mousy dark horse Linda Bassett (from East is East and The Martins) is Cora. All sacrifice their respectability and expose their contrasting characteristics whilst vying for which month of the calendar to appear on, with April being surprisingly popular? The brief introduction of each individual within the group dynamic adds texture to an uncomplicated tale, and offers multiple opportunities for comedic repartee. Far from obscuring the focus of the main story, personal slants on the basic theme are integrated so successfully into the central thrust of the film that the added multi-dimensionality enhances a potentially one-note story.

Greater depth is further fortified with a series of conflicts that increased in intensity, within each of the three acts, beginning with each and every woman’s struggle to disrobe. Penelope Wilton’s prudish Ruth, amongst all the women, is shown to wrestle most vigorously with her misgivings about appearing nude. The realisation that her husband is playing away from home proves to be the catalyst that prompts her into baring all. Her attitude exemplifies the way the women struggle to regain some lost sense of sexual confidence in their latter years.

The siege mentality adopted by the women, spearheaded by Annie and Chris, in the face of criticism from the WI provides the second point of conflict. Culminating in a public defence of their actions at the WI national assembly in London, this provides the hook that draws the story out of its rural Yorkshire setting into the wider arena. From here the scrutiny of the global media, and all the prizes and pressures that this brings, including a trip to America and an appearance on the Jay Leno show, starts to impose cracks in the cohesion of the group, as the girls find it increasingly hard to keep things real.

This final third of the film works least effectively from a story point of view, but does add an injection of glamour at about the right time. As your head begins to swim with the familiarity of the “Little England” settings, the girls are whisked off to Hollywood. Cue some sun kissed settings, meaty production values and slinky black dresses. The girls sell it large, and largely sell out (still for a good cause of course!) as the media takes control. Ironically, at this stage, the film turns its back on the homeliness that might have some cache with American audiences in the same way The Full Monty or Four Weddings and A Funeral may have, for the sake of some incongruous Hollywood high-life for the folks back home.

Although not intended to subvert expectations too severely, make no mistake this is a film heavily marketed for a specifically more mature and female demographic, Calendar Girls might just surprise a few people. It’s an astute attempt to deal with a number of key themes with no small degree of humour and taste. A reliable cast gel effectively, and the exploration of their shifting motivations and interactions, specifically in Helen Mirren’s character, is where the film works best.

An economical and accessible script seeks to empathise on a universal level, not just with the central characters that appear in the calendar, but in passing at least, with the feelings of the husbands, fathers and sons that bear the fallout. A number of key scenes examining the repercussions of fame on the nearest and dearest make sure the film is not restricted purely to the mature female experience in a way that would alienate a wider audience. Best of all, the screenplay manages to use the true story as a departure point rather than a means to an end. Calendar Girls knows its target audience, and goes after it vehemently, but it’s also happy to pick up a number of passing punters on the way, namely the husbands, boyfriends and sons who will be dragged along kicking and screaming to see this film!

A witty and timely appropriation of real life English quirkiness, bundled into a premium package of star quality and narrational slickness, Calendar Girls is a mild mannered tease. Settling somewhere between Readers Wives and Woman’s’ Own, it might just be this year’s bit of fun that will run and run.