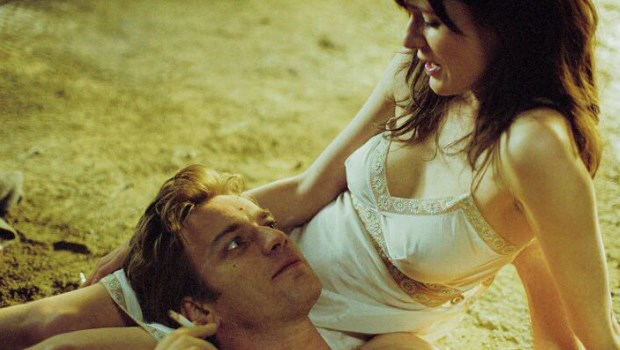 Summary: Young Adam is a majestic triumph of mood and atmosphere, which will absorb even the most unwilling viewer.

A complex tale simply told, Young Adam looks set to become British Cinema’s major critical triumph for 2003. Early buzz, generated from the film bouncing around the odd film festival or two, has suggested that this engaging psychological drama could restore a rare and much needed complexity to contemporary British cinema.

The bedrock that supports the entire venture is Ewan MacGregor. Unequivocally Britain’s major on-screen export of the moment, blessed with a monumental screen draw, his brooding central presence in the film will undoubtedly attract curious audience-goers not usually accustomed to such ambling psychological fare. What these swaying MacGregorites make of the Scotsman’s enigmatic performance, in such unfamiliar surroundings, remains to be seen.

Based on the novel of the same name by Scottish writer Alexander Trocchi (who’s own life would make a wonderful film) Young Adam charts the erratic movements of melancholic loner Joe: would-be writer, traveller and deck hand on a boat ferrying cargo along the canals between Edinburgh and Glasgow. Less than happy to be slumming it, Joe’s guarded disdain for his employers transforms into something more immediate when the body of a young woman is pulled out of the drink. Gradually, Joe’s association with the dead girl is revealed in brief, episodic flashes of memory that temper his instinctive and often destructive advances upon a host of women in the present. Incapable of restraining the natural virility he flaunts so blatantly in the face of their dour, flat-capped husbands, Joe thrusts himself from pillar to bedpost longing to escape the past and to reinvigorate his sense of self. However, despite attempts to distance himself from the death, he finds Cathy’s legacy inescapable, and his own culpability unbearable.

At the heart of Young Adam beats an absorbing and surprising performance by MacGregor, which re-explores the path through darker territory the actor walked down in his early roles. As Joe, the dangerously charismatic drifter, Macgregor is a maelstrom of contradictory inner tensions, all bubbling under the surface, that occasionally and explosively come up for air. Deeply impressionist and told extensively through point of view, the narrative is drawn tautly around this engaging character, who has apparently become unhinged from the rest of humanity. “You’re nice Joe”, employer-come-lover Ella (Tilda Swinton) softly states, blissfully spellbound by Joe’s superficial charm and potency, all too unaware of his jet black centre until he flagrantly tosses her aside.

Cocky, intellectual, brash and atavistic Joe’s physical, sexual prowess cannot be replicated in the mind. MacGregor captures Joe’s inability to articulate himself successfully, with the comparative lack of dialogue more than compensated through action completely unchecked by any sense of right or wrong. Occasionally, Joe finds a conduit of expression, musing evocatively over the events surrounding the dead girls passing to an impromptu audience of Ella and her husband Les (Peter Mullan), but in the most part Joe’s internal impotence leads to a sense of frustration that manifests itself explosively, alienating anyone within blast range. We come to discover through Joe’s relationship with the dead girl Cathy (Emily Mortimer) ended resentfully in one spectacular scene, that will divide audience reaction with its ambiguity, brought on by Joe’s inability to transcend the mundane rigours of normality. Joe’s failed ambitions as a writer bring him back down to earth, on a collision course with further introspection and a steeper descent into amorality.

Technically the film is a joy to behold. Favouring Europe over America and wearing its influences clearly and unashamedly on its sleeve, Young Adam is styled very closely to films of the era contemporary with the setting. Knowingly indebted, to the edgy and engaging social dramas of the early 1960’s that won such acclaim for British directors worldwide and garlanded with a smidgen of continental influence (mostly French and Italian), notably in the pacing throughout the first two cold and contemplatory thirds of the film, Young Adam feels familiar, yet fresh and distinctive, as if a re-examination of the basic human values and pre-occupations that were so prevalent in films of that age was well overdue.

Visually the film works hard to externalise much of the emotional tension that is buried deep within the characters in the welcomed absence of purely narration dialogue. Young Adam succeeds in developing the story in a way that compliments the actors’ job, allowing for more ambiguity in the main characters leading up to the film’s final outcome. Seasonal changes upon the Scottish urban landscape clearly demarcate alterations in mood and the passing of time. The individuals who work the canal have ground out a daily routine that has become part of nature’s ebb and flow, Joe is the picture of incongruity in the midst of all this. Within the film’s confined internal spaces the human body takes on a territorial presence of its own. Explored like a landscape, moments of pre-sexual tension are balanced with shots of startling delicacy that more than matches anything captured on location. The copious sex scenes in Young Adam are never dull, even when MacGregor is getting his end away for the umpteenth time!

An attractive range of personnel have collaborated on Young Adam, extending MacGregor more than adequate support and strengthening all the key areas with the ballast that the producers hope will enable the film to enjoy a weighty return at the box-office. Young Scottish director David MacKenzie, stewards his second feature hot on the heels of The Last Great Wilderness. Glaswegian actor-director Peter Mullan, the embodiment of emasculation as Les, convinces once again that he possesses the ability to produce quality on both sides of the lens. Art cinema doyen Tilda Swinton continues to open up her ephemeral on-screen presence to a larger audience as the downtrodden yet stoic Ella, and the porcelain-skinned Emily Mortimer as Cathy, Joe’s doomed former love, is mesmerising, pure and simple. David Byrne, who delivers a magnificent modern score that suits the film exquisitely, completes the six-strong, all-star team.

Young Adam is a majestic triumph of mood and atmosphere, which will absorb even the most unwilling viewer. A mature adult drama that dares to convey a demanding story of human fallibility, unclad in the false finery of a hundred happy endings in countless films that purport to deal with similar issues.