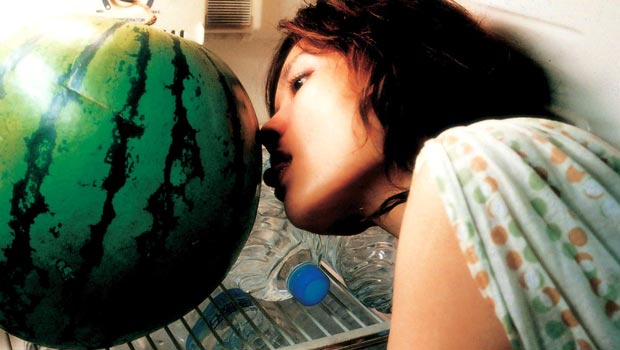 Summary: Tsai is again masterful in his ability to extract performances from his actors that are almost too real.

Sex involving watermelons, lapses into musical numbers and the sight of desperately thirsty people filling water bottles from public toilets feature in the surreal and emotionally harsh The Wayward Cloud. Not a director to make it easy on a viewer, Tsai Ming-Liang examines the lives of two lovers on a collision course of truth during a water shortage in Taiwan. As the popularity of melons skyrockets due to the lack of fresh nourishment from the taps, porn star Hsiao-Kang (Lee) starts dating a girl he once met as a watchseller (Chen). Keeping his adult film life secret, she brings home melons to provide drinkable liquid and they have a stagnant domestic life. Like another of Tsai’s movies, I Don’t Want to Sleep Alone, he doesn’t use a lot of dialogue or plotting. Instead he relies on simple scenes to peek into their lives as though a fly on the wall. This time, however, the presence of musical moments and sex scenes unsettle the simple formula.

The first scene of The Wayward Cloud depicts a bedroom performance involving the fisting of a melon, laying down an intention of Tsai to conflict the dull homelife of Hsiao-Kang has with his girlfriend Shiang-chyi and his adult film career. Alone and together, there is little interaction beyond their obsession with melons as an alternative to the horrible places they are forced to get water from. It is only when on set Hsiao-Kang gets to feel human contact in a workmanlike role. Here Tsai parodies the act of capturing sex on screen: in one scene the producers are forced to run off and find more water as their bottled supply runs out while filming a shower sequence. It is a blunt way of showing no one is getting much pleasure from their current lifestyle.

Meanwhile the musical interludes range from the bizarre, Hsiao-Kang turning into a merman and breaking into song while bathing in a rooftop storage tank, to the slightly disturbing sight of a rather large body part coming out of a box. They lighten the mood of the movie and comment on the inner feelings of the characters in place of them actually communicating properly on screen. Throughout the entire film Chen says only one line as she re-introduces herself to Hsiao-Kang, asking “Do you still sell watches?”. Her perpetual silence is finally broken in a climactic final scene in which she must confront the truth about Hsiao-Kang’s career in an alarming but emotional climax.