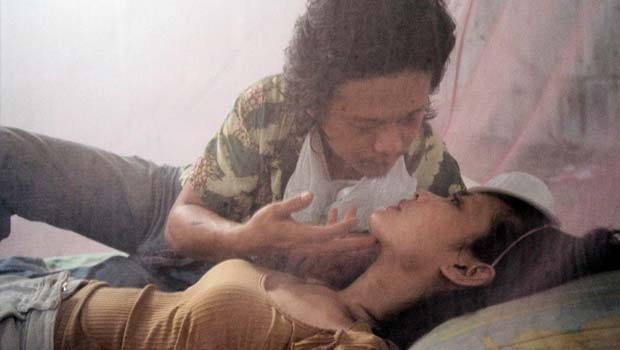 Summary: Tsai offers up these images but never seeks to rationalise them with words, giving the film a dreamlike quality.

A Malaysian man lies in a coma in a Kuala Lumpur hospital bed. Elsewhere in the city, another man is being nursed back to health in an abandoned building. The same actor, Lee Kang-Sheng, plays both and whether one is dreaming the other is a question that hangs over this minimalist yet hypnotic character study from major Asian director Tsai Ming-Liang. Making his first film in his Malaysian homeland, Tsai chooses to reflect on the lives of the foreign workers who were left unemployed during the Asian economic crisis in the late 1990s, now hiding as illegal labourers. Opting to use small gestures of life rather than sentimental plotlines, I Don’t Want to Sleep Alone itself draws you into a dreamlike trance, much like the two male characters played by Tsai’s regular muse Lee.

The film opens with a long, still shot of the man in a coma before switching to a bustling alleyway where Hsiao Kang wanders into a con game and is severely beaten. Lucky for him, aid comes from the illegal workers who carry him back to an abandoned apartment where the lonely Rwang (Norman Bin Atun) nurses him back to health. Although Rwang is drawn to Kang as he cares for him, when Kang returns to health he does not share the same feelings. Instead, attentions turn to noodle bar waitress Shiang-Chyi (Chen Siang-Chyi) who looks after the comatose man. From this love triangle Tsai captures gritty Malaysian life of the forgotten classes, battling the smog with surgical masks which saturates their every move. The sudden shift in screen movement seen in the first two shots is replicated throughout I Don’t Want to Sleep Alone as Tsai contrasts the hustle and bustle of Kuala Lumpur’s streets with very private moments shared between Rwang, Kang and Shiang-Chyi. In doing so he gives voice to the forgotten classes, normally lost among the crowds inhabiting the city who don’t take a second look. However, Tsai resists giving them voice to relate their inner thoughts, preferring to let them play out their developing relationships in actions. It is poetic to watch, despite being sluggish at times.

Tsai’s camera is often found static, lingering on shots that evolve organically to reveal the nuances of human feeling: it feels voyeuristic, with CCTV angles and the most intimate of moments captured. In one of the most visually dramatic scenes, Kang and Rwang stare into the atrium of a half finished building where a deep pool of dark water has developed from rain and flooding. The visual impact sums up the emotional distance forming between them in the decaying underbelly of the city. Later, Kang and Shiang-Chyi struggle against the smog to enjoy some romance, again dramatising the suffocating effect of the environment. Tsai offers up these images but never seeks to rationalise them with words, giving the film a dreamlike quality. When the final shot arrives, he presents a calming escape from the hostile world for them all in a surrealist space. It leaves you unsure whether they can escape their drab surroundings to a happier life, but entranced by Tsai’s magical filmmaking.