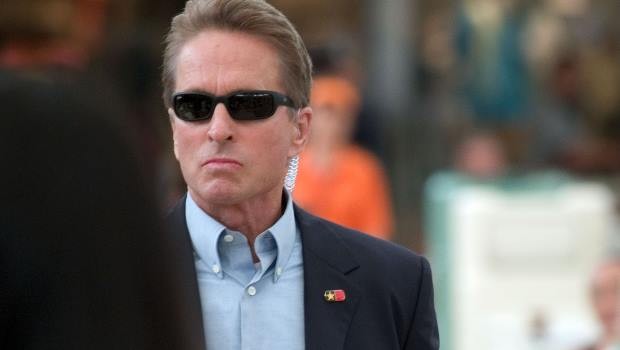 Summary: The proof of the pudding, however, is in the eating, and The Sentinel is a pretty unsatisfying meal.

You like action? I’ll give you Keifer Sutherland, from smash hit show 24, as a detective trying to find a mole inside the Secret Service who is helping terrorists with their plot to assassinate the President of the USA.

You like personal drama? I’ll give you Michael Douglas, as a Secret Service agent who used to be his best friend until he had an affair with his wife (although it turns out, in a Shakespearean plot twist, that he didn’t) who he suspects is the mole.

You like sex? I’ll give you the aforementioned star of Basic Instinct and former sex addict getting it on with Kim Basinger, the President’s wife. And I’ll even throw in Eva Longoria from Desperate House wives in a pair of tight trousers as a rookie Secret Service agent.

Sounds terrific, doesn’t it? If I was a Hollywood mogul, I’d throw waste sums of my personal wealth at such an idea.

The proof of the pudding, however, is in the eating, and The Sentinel is a pretty unsatisfying meal. First of all, in this kind of film a lot of emphasis is placed on the hero, and in Michael Douglas we surely have an actor who is now far too old for this kind of thing. He might be wearing well for a 61-year-old, but he still looked incredibly unconvincing out running Jack Bauer. Even less convincing is Eva Longoria as rookie agent Jill Martin. It’s notoriously difficult for actors to make the switch from TV to the big screen, and based on this performance, I can’t imagine that she will succeed in making the jump. In fact, I imagine she will look at Jennifer Aniston’s career with envy.

This aside, in a by-the-numbers action thriller you need a slightly decent twist at the end to make the audience feel like they’ve not just wasted two hours of their lives. The Sentinel falls short here too; it’s incredibly obvious from very early on who the real mole in the Secret Service is going to be.

And another thing, why does one of the terrorists, who I think are all meant to be ex-KGB operatives, have an English accent? Actually, this is nit picking, as it’s not really explained who they are or what they’re trying to achieve by killing the president.

On the plus side, the action scenes are handled fairly well, as you would expect as it from Clark Johnson, the man who brought us that classic Colin Farrell and Samuel L Jackson vehicle S.W.A.T. In short, a film 12-year-old boys will enjoy.